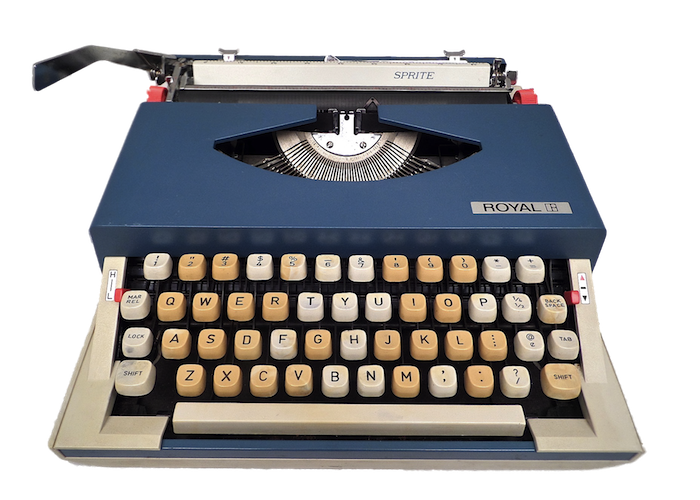 The Royal Sprite is one of my favorite typewriters. Designed to look like a stereo component, it was marketed to the young and hip. Unmistakably, it is a product of the 1970s, a modern typewriter with stereophonic styling and futuristic ambitions. It’s a “fun” typer.

The Sprite is light and durable. Made of high-impact plastic, one Sprite reportedly survived a tornado — I don’t find this hard to believe, as mine was bounced around too, and it still works. That “space-age” plastic certainly does the trick.

The Sprite reportedly came in two styles: with an AM radio and without. I’ve never seen a radio Sprite, neither in the wild nor on the Internet, but a nearly identical model, called the Swinger, always appears with the radio — the radio snaps into the case’s lid. Still another identical machine, the Marksman, does not appear to have included a radio.

Update: Only the Swinger and Fleetwood included an AM radio. The Sprite, Astronaut and Marksman — otherwise identical machines — did not. This design of typewriter was also sold under the Imperial label. The Imperial Gemini touted a built-in radio like the Swinger (see Etsy listing here).

Regarding four names for essentially the same typewriter, my impression is that Royal marketed the same machine under different names to reach a broader audience. “Sprite” is cute; “Marksman” cool; “Astronaut” is space-age; and, “Swinger,” well, enough said. Note, the Fleetwood is the same machine, but with a faux, wood-grain design.

Advertisement for the Royal Sprite in the Milwaukee Journal, Dec. 11, 1973.

Though a Royal, the Sprite was manufactured by Silver-Seiko in Japan (source).

I find this machine strangely appealing. Yes, it’s boxy. Yes, the color combination is odd — red nobs and blue frame. But it is entirely representative of the seventies, a decade that tried so hard to anticipate the 21st century. More often than not, the seventies overshot the goal. Nevertheless, the Sprite has aesthetic charm.

the Sprite can be had cheaply. I paid $20 (maybe less) for mine, and one lad apparently paid a buck (see here). The Swinger commands a higher price.

This set of Royals, in some sense, are the first “multi-media” devices I can number. What’s your take?

One last note, when I gave my Sprite a good cleaning, bits of eraser clung to every part of the machine. I gather this typewriter was popular among students (and revisionists).

Next post: Charles Lincoln, I have your Simplex typewriter

Previous post: Achtung baby! The Groma Kolibri is no Trabant of typewriters