When the night is your page and your ship the typewriter “The main dependency for night signaling, however, falls upon the Ardois system which consists of a cluster of red and white lights (incandescent lamps) the various combinations of which, signifying the respective figures and letters of the alphabet, are controlled and manipulated with almost incredible rapidity by means of a keyboard located on the bridge of the battleship and operated much after the fashion of a typewriter keyboard.” – Popular Mechanics (Chicago), November 1910

I don’t want to overstate the reality, but in one sense, the Ardois system turned an entire battleship into a typewriter, wherein a sailor could type out messages in light.

The system was introduced in 1891 by Captain Ardois (a Frenchman?) and originally employed a circular keyboard. Later versions incorporated a regular keyboard as pictured (above) in Popular Mechanics in 1910 (click here to read the article).

A detailed description of the Ardois system can be found in Information from Abroad by the Office of Naval Intelligence, 1891 (click here). The circular keyboard is illustrated below: 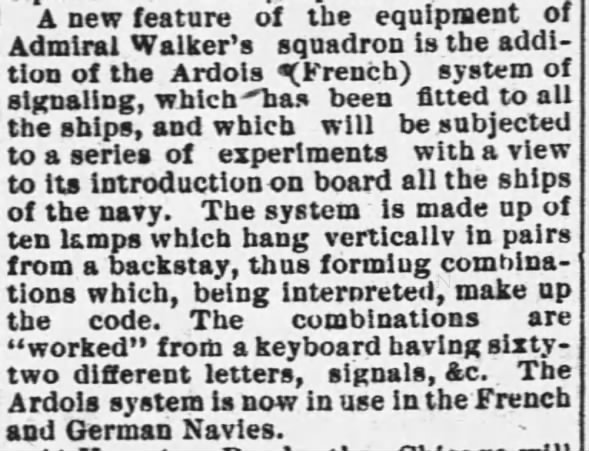 Pitched off the saloon table

Next post: “Papa lets me write on his typewriter”