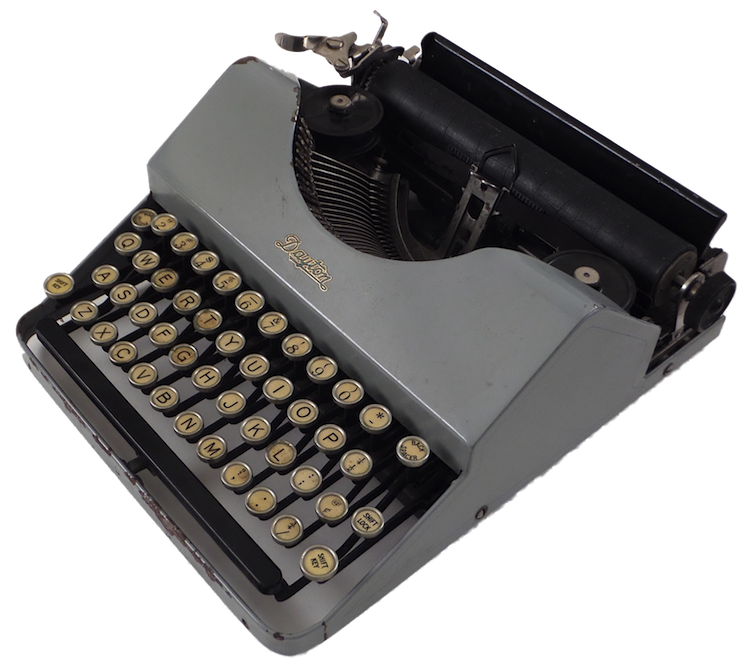 There are only a few opportunities to own a Dayton Portable Typewriter, and one lately came my way. The machine above is one of seven known to be circulating among collectors.1 It now sits in my collection, alongside a Molle No. 3 and a Fay-Sholes No. 6. That the Dayton, introduced in 1924, is a rare machine is part of its appeal, but still more appealing is its story.

The idea was to capture the low end of the typewriter market, offering an inexpensive machine to consumers who otherwise could not afford one. In essence, it was to be a typewriter for the masses. Only, the company did not succeed, and if serial numbers are any indication, the company produced no more than a few hundred of these machines. The Dayton Portable Typewriter Co. of Dayton, Ohio, occupies an unenviable place in history as a failed enterprise.

I first learned about the Dayton reading Darryl Rehr’s Antique Typewriters.2 IÂ was captivated by the machine’s ultra-utilitarian design and stark appearance, feeling that, despite its aesthetic deficiencies, the machine was worth owning. Frankly, I never anticipated owning one. Now that I do, I am compelled to compile its history. For this task, I rely on two sources: Richard Polt’s write-up on the Dayton for ETCetera3Â and Robert Messenger’s blog entry, “Day of the Dayton, Typewriter of the Damned”4 — in addition to my own research.

Despite its drab appearance, one senses pride in the machine’s design. It was a serious project, one that had potential to change market expectations, not a speculative pursuit. The company was led by Charles Underwood Carpenter, a renowned engineer and businessman, who had established himself in business services. Writes Polt:

Carpenter was a manager at Daytonâ€™s National Cash Register Co., where he established a modern personnel office. He was the author of books on management, and also patented a thrust-action typewriter that was never produced (#1,564,200). Whether there was any business relationship between NCR and the typewriter company is not clear.5

Carpenter wrote at least two books, Profit Making in Shop and Factory Management and Increasing Production, Decreasing Costs, indicating he possessed the expertise to lead a company in the production of an inexpensive portable typewriter.

The Dayton Portable Typewriter Co. was incorporated June, 1922, having an authorized capital of $500,000.6 How much stock was actually issued is uncertain. A July 9, 1922, New York Times announcement mentions a figure of $200,000 for a Delaware charter.7 Whatever the case, the company ultimately may not have raised enough funds to sustain this project. That so few typewriters were ever produced suggests this possibility.

Patents for the one model they would manufacture were issued April, 1923; a year later, the first typewriters were offered for sale. The typewriter retailed at $35; an optional carrying case cost an additional $2.50. The Dayton came in battleship gray8, with blue pin striping, or black with a matte finish.9

The company had not only to market the typewriter, but also the idea of the typewriter. It was neither pretty nor innovative, simply functional. It’s low price might have appealed to some consumers (the Remington Portable [#1] sold for $60 in 1921), but it’s appearance likely did not. Perhaps conscious of these realities, the company explained:

Our modern system of intensified quantity production — with only one size and one style — makes [the low price] possible. We use the same methods of production and sale of the ‘Dayton’ as Henry Ford does in making his car. Then too, we have eliminated literally hundreds of parts, as our PATENTED DESIGN requires only 559 parts, as compared with over 2,000 parts in other standard machines.10

Technically this may be true, but it seems the company ignored one critical factor in the design of its machine: consumer psychology. Customers demand novelty and variety. The Dayton promised neither. (Granted, Apple essentially sells one phone, but it is a damned pretty phone, and full of innovation.) What Dayton offered was an inexpensive version of an existing invention. To succeed, their machine would have to be very cheap, and abundant. At $35 the machine was only relatively cheap, but not very abundant.

I’ve located an advertisement for the Dayton, published in the Pittsburgh Press, Dec. 15, 1924. It appears the company drove consciously to sell the idea of the Dayton. Here is the ad:

Joseph Horne’s was a regional department store chain based in Pittsburgh, Pennsalvania.11 One wonders if Dayton employed salesmen — typewriters were often sold by traveling salesmen in those days — or if the company relied on retailers for the distribution of this budget machine. It is possible, given the Dayton’s limited volume, that only a few retailers ever carried this machine.12 In any event, Dayton ceased production of its typewriter some months after it was introduced — either late in 1924 (selling off its remaining stock in December) or else sometime in early 1925.

Some authorities suggest the Dayton failed because its build quality was inferior to other competing machines. Collector Richard Polt, who owns one, questions this assumption and so do I; further, there is no primary source information confirming this view.

Writes Polt, “My judgment so far is that the machine is rugged, and seems carefully made. Its swift failure was more likely due to the long odds faced by a small company against established competitors, rather than to the marketâ€™s fair judgment on its quality.”13

My take is similar — read on…

Why the Dayton failed 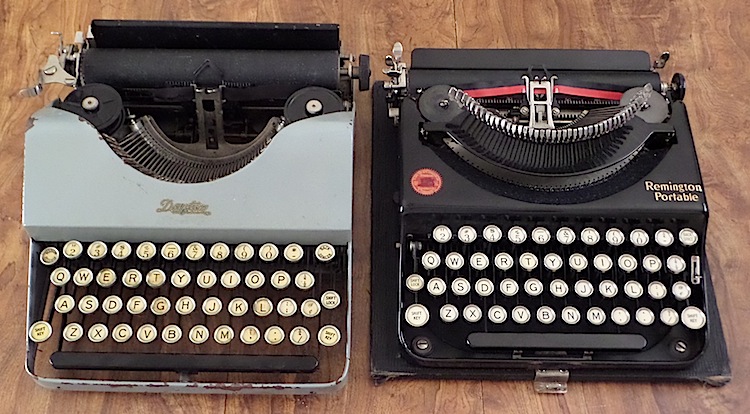 What follows is speculative, but reasonable given the facts —

Success at the low end of any market requires volume and capacity. You may have the cheapest product, but you also have the slimmest margin. While there is money to be made at the low end, volume must be high; otherwise, you’ll never make enough money to cover your start-up costs. As mentioned above, for lack of funds Dayton likely never reached critical mass in terms of volume. Given that Remington was manufacturing tens of thousands of portables each month (not to mention several other major companies), producing a mere few hundred would have had a negligible impact on the market. Further, Dayton could never have survived as a “boutique” typewriter company.

The comparison between Dayton and Ford, also, is faulty. Ford may have succeeded through “intensified quantity production,” but the market for a mass produced car was a new market then. By the time the Dayton appeared on the scene, the typewriter market was already established and growing. Considering the secondary (used) typewriter market, at $35, was the Dayton really that much cheaper?

“One model and one style” makes sense from the engineering standpoint, but the customer simply does not buy it. Consumers demand variety and innovation, and, given one choice, customers have but one decision, that, quickly made, might lead him or her to another product. Further, cheaper models within a product line often inspire customers to “step up,” even if only on the basis of perceived value. Customers like choice, and the choices Dayton offered were gray or black.

Supposing Dayton succeeded, nothing would have prevented larger manufactures from undercutting them. Except that Dayton controlled a significant part of the low-end typewriter market, long-term survival would have been doubtful. Certainly, stockholders perceived this shortcoming.

Unfortunately, all one can do is speculate. We do not know the profit margin on each unit, nor do we know how many were sold and in what markets. In 1928, the company’s president, Carpenter, passed away. Twenty years past relevance, in 1944, the Dayton was listed as a “worthless” security — I suppose people still had stock certificates then.14

Ultimately, the Dayton might have been too budget minded:

Collector Alan Seaver speculates, “Machines priced way too low, perhaps such as the failed Dayton Portable … may have failed largely because the price was TOO low and the public perceived that only a bad typewriter could be had at that price.”15

Bruce Bliven, Jr. describes the overall sentiment of the business world (the Dayton was also marketed to professionals) in The Wonderful Writing Machine, pp. 158-159:

The typewriter in the United States was above all else a business tool. And businessmen, while they didn’t want to pay a cent more than they had to, were vitally interested in quality. They considered real improvements or refinements as necessities rather than luxuries, and their secretaries were in complete agreement. Typists, on the whole, felt that the best was none too good. So that there was no significant demand in the United States for a stripped-down or second-class office machine, and consequently no one was able to pull off a coup comparable to Henry Ford’s masterful stroke in the automobile field. … Businessmen, when it came to typewriters, wanted nothing less than the Cadillacs, Lincolns, and Chrysler Imperials.16

The Dayton was no Cadillac.

I am fortunate in that my Dayton is in good working order, though a thorough cleaning and some adjustments are necessary. I concur with Polt that the Dayton is a solid machine. The metals, nearly a hundred years old, are not cracked or stressed. The frame is straight. And the plastics have endured. Even the carrying case is sturdy: the edges being reenforced with metal plates and the bottom portion of the case being made of metal. Overall, the build is not cheap.

Curiously, the shift lock key on the Dayton is on the right-hand side, not the left. I cannot tell why, except that such placement makes the machine all the more distinctive.

Overall, the Dayton is very solid and functional, though a little inelegant. It is a slightly larger machine than other portables, and a bit heavier — more still by the metal in the case. It is a decent typer.

The platen on my Dayton is hard and cracked, which doesn’t make for a good typing surface. I am restricting my use of this machine to a few samples. Here is the typeface, slightly enlarged for viewing purposes:

Here are the first words I ever typed on my Dayton:

Note: More photos will be forthcoming. If you have any to share, please e-mail netadams @ gmail.

The extendable platen knob is a bit of a mystery. I looked over the patent applications for this typewriter and found no mention of it.

Gatsby and the Remington portable
666: "The Beast"
"No longer a breach of etiquette"
333: "God's phone number"