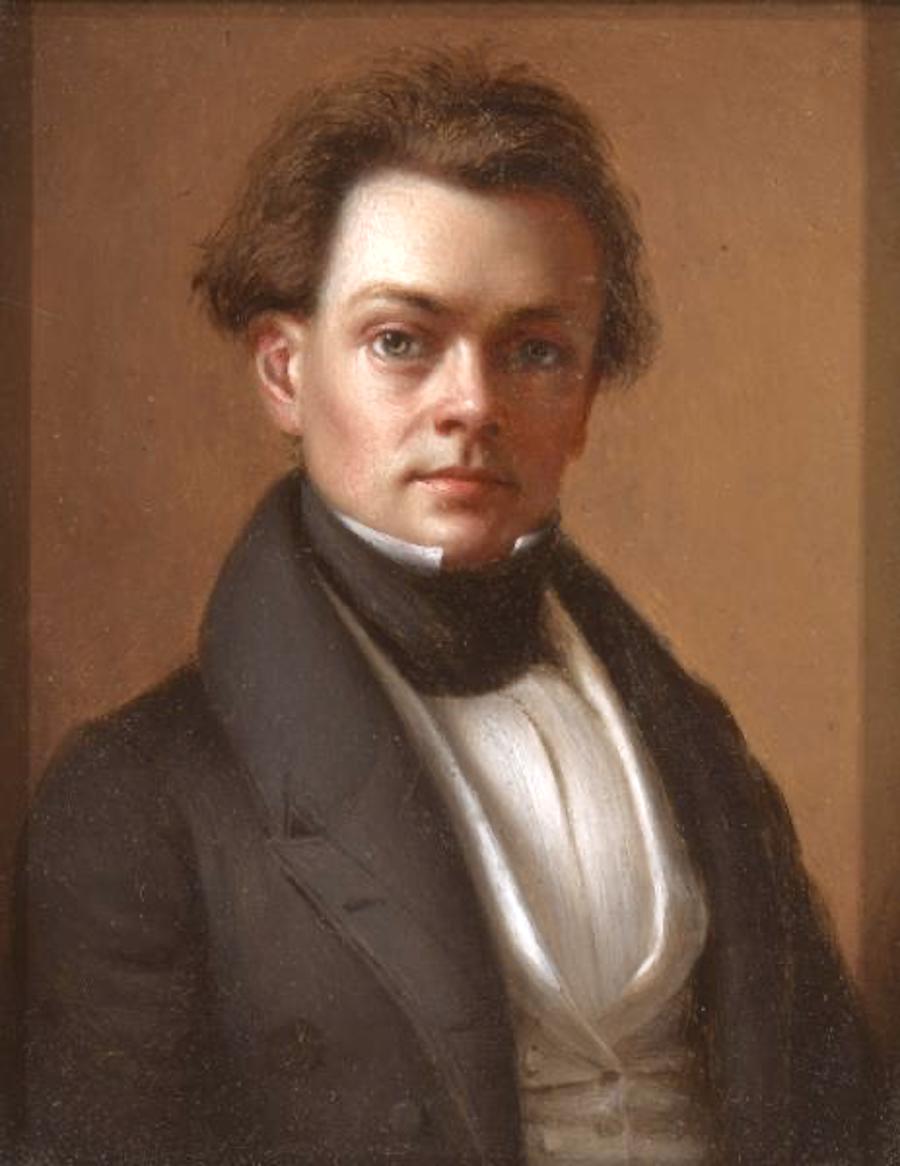 The function of a typewriter is so obvious that it seems almost absurd to describe how one works. But the early inventors of these machines faced just that challenge, for anything involving “type” must certainly be a printing press, right?

In 1850, Oliver Tarbell Eddy strove to distinguish his writing machine from the printing press:

“In ordinary printing, the types are set separately, and the form when prepared produces at each impression the entire matter to be printed, multiplying the same ad libitum. In my invention I aim at the production of but a single printed sheet as a substitute for a written one, and instead of there being as many types as there are letters in the printed matter, the same type makes all the letters corresponding to it in succession as they occur.” 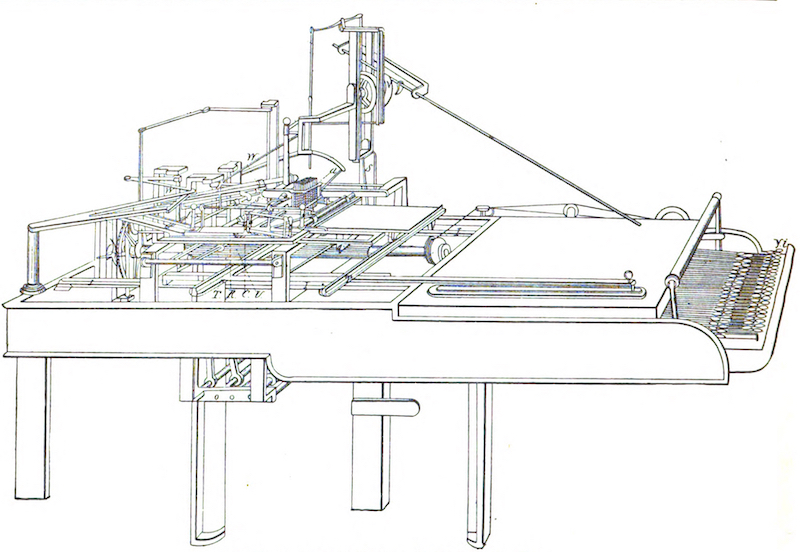 His patent application can be found here. According to Michael Adler, “He built a monumental writing machine in 1850 and literally dedicated his life to promoting it. He received nothing but setbacks; a cry for help was turned down, and he died, as he had lived, in abject poverty. He has been nominated as the first of many professional typewriter inventors whose lives ended in tragedy as a direct result of their inventions.”1

American Industries magazine (August, 1923) described that Eddy had appealed to the U.S. government for funding but was unsuccessful. “The Eddy machine was highly ingenious and did good work,” the magazine wrote, “but was too cumbersome and intricate for practical use.” 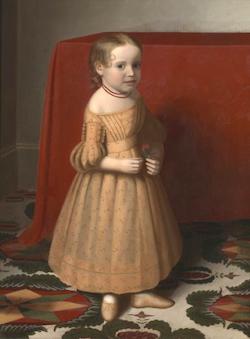 Where exactly it is documented that Eddy died in abject poverty is unknown. Other historical accounts suggest a more distinguished life, highlighting that he was “a self-taught painter of portraits and miniatures which are ranked by modern experts as meritorious examples of early American art.”2 Another account observes that “Eddy was extremely successful in Newark and painted at least thirteen portraits of members of the family of a hat manufacturer named William Rankin.”3

His works were displayed at the National Academy of Design in 1827, and today his paintings can be found in several museums and online.

Oliver Eddy was the eldest son of Isaac Eddy, a printer-engraver who was born Weathersfield, Vermont, February 17, 1777, and died at Waterford, New York, July 25, 1847. Oliver worked with his father “in the printing office, the son doing the engraving.”4 He also patented a coffee pot in 1859 while living in Philidelphia (see patent here).

According to several accounts, Eddy was born in 1799 in Greenbush, Vermont, and died in 1868 in Philadelphia, Pennsylvania. He married Jane Maria Burger, the daughter of a silversmith, in Newburgh, New York, in 1822, and they had seven children. She died in 1877 in Philadelphia.

However Eddy’s life turned, he certainly ranks as an unsuccessful typewriter inventor. His invention was only briefly noted in 1849, and again after the typewriter had become successful, and is little known today.

His enduring legacy, however, is his art. 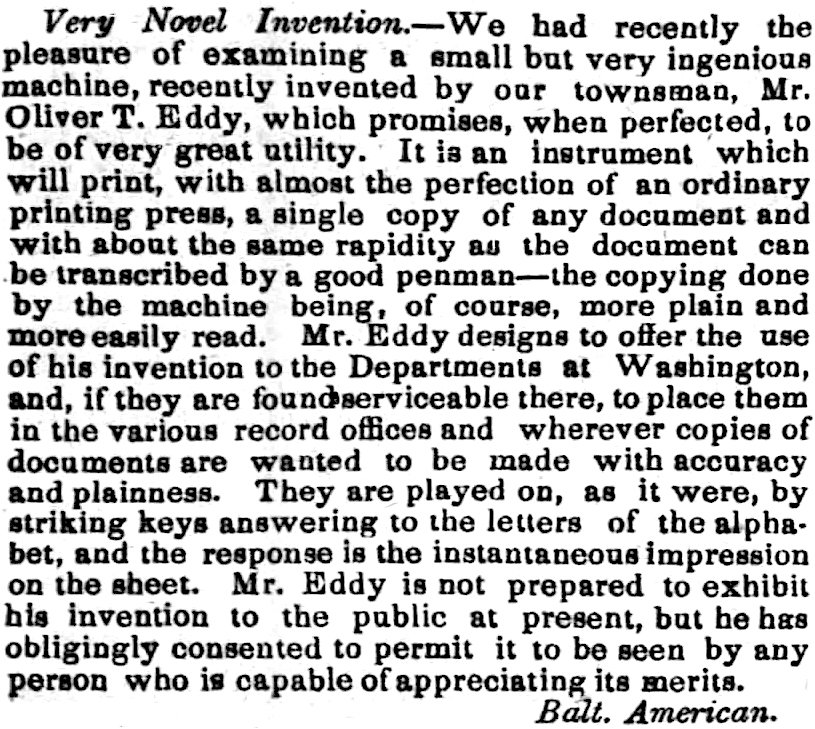 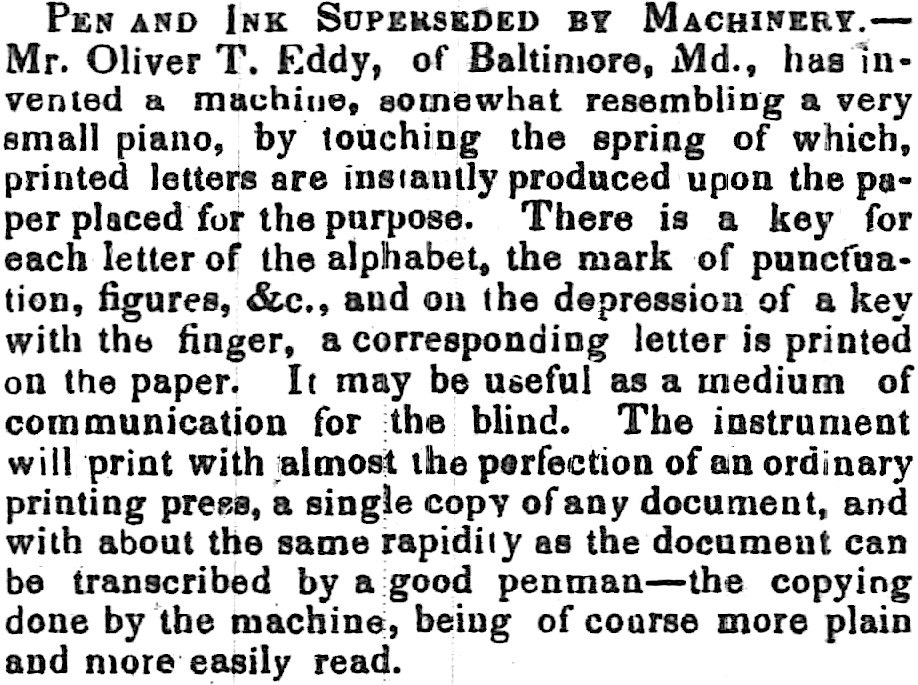 The optimism of these accounts is muted by the reality that the machine never launched. No working model exists today.

Oddly, “Pen and Ink Superseded by Machinery” was reprinted as late as 1867. One wonders what inspired the editors to reprint the article at such a late date, and one year before the inventor’s death. 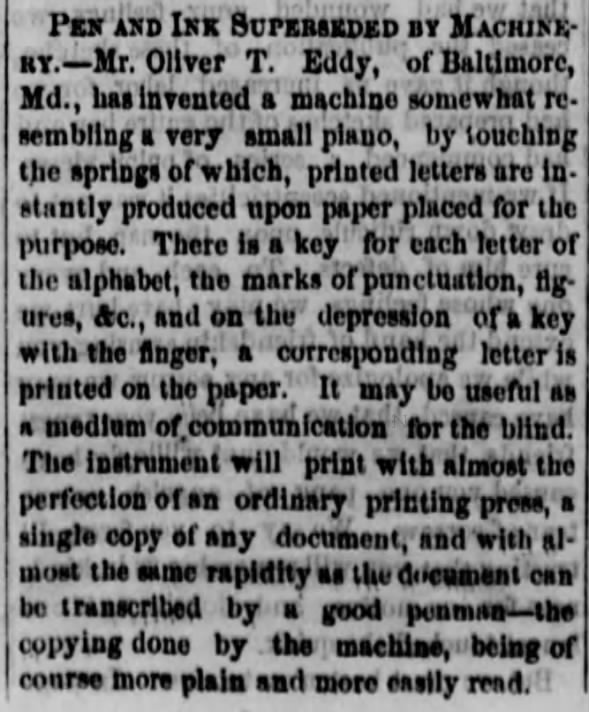 News of the Sholes and Glidden’s invention would not be featured in newspapers until 1868:

Note: Porter’s College was among the earliest to promote the typewriter (see here).

The Corona Typewriter Company employed Eddy’s machine in a number of its advertisements in 1918 and 1919, contrasting the “monumental” size of the Eddy to the Corona 3 (click images to view larger files): 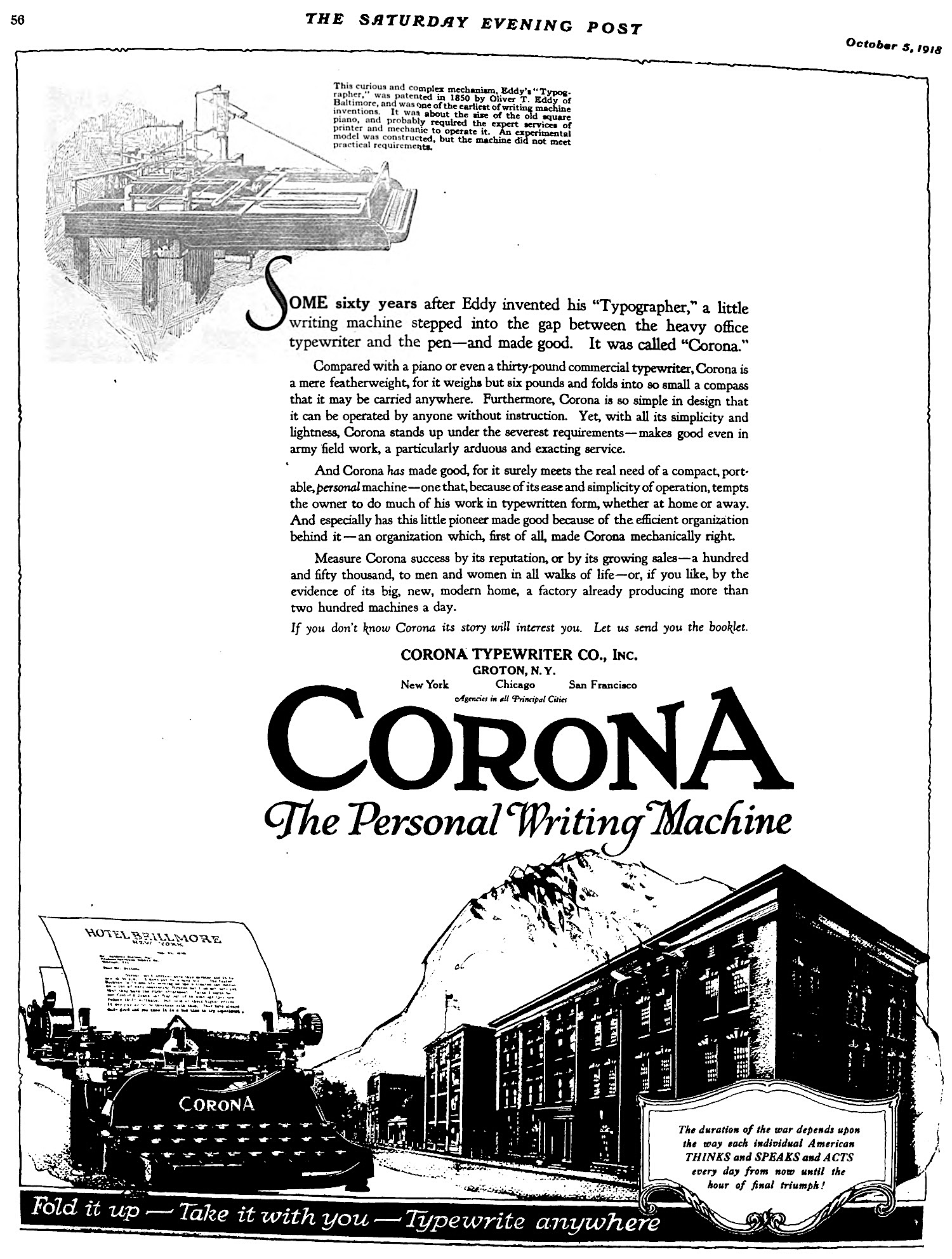 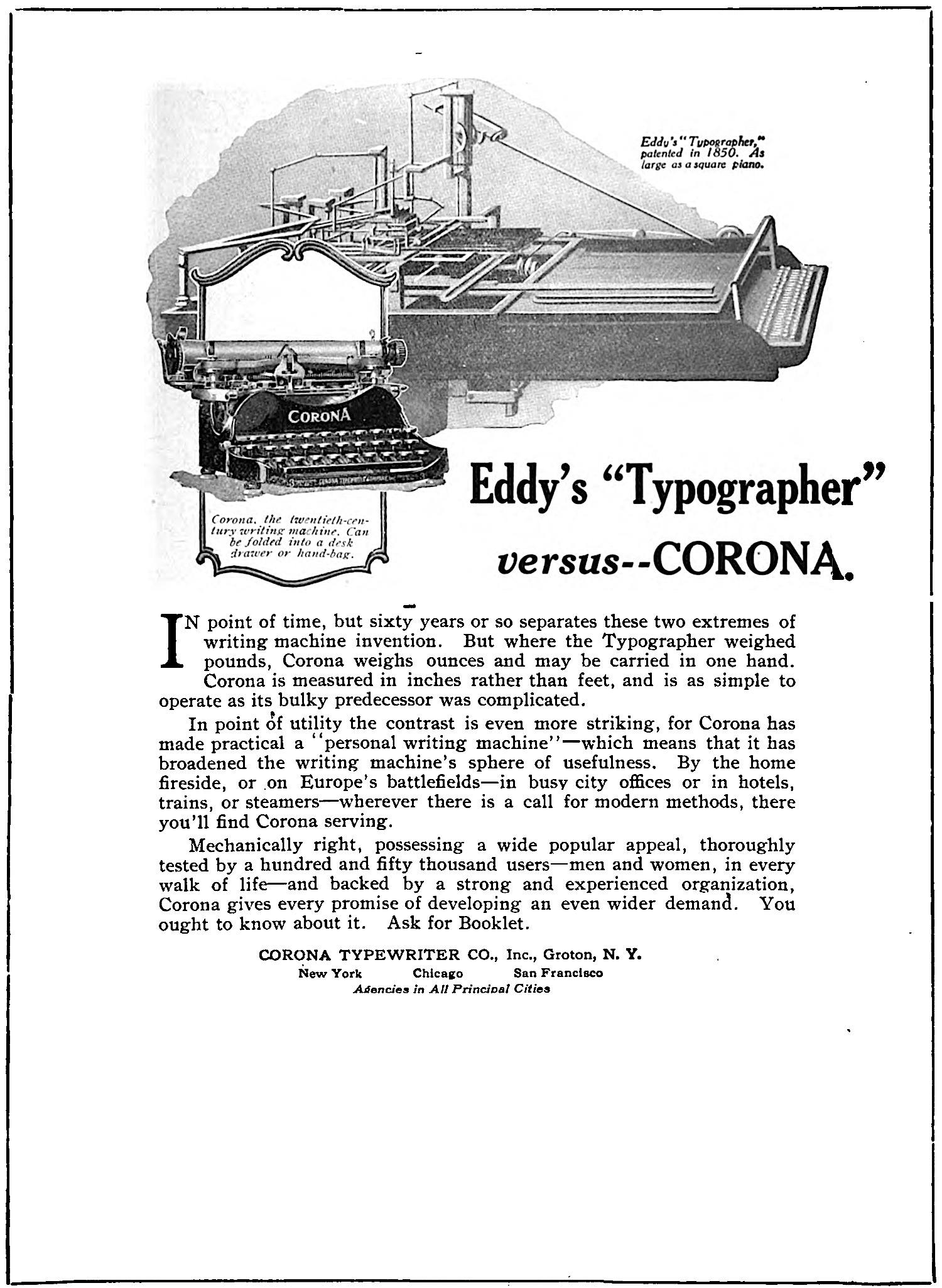 The Tachytypograph
What makes it unique?
More on the House typewriter (no photo, though)
Horton's Typograph (ghost of the Bennington?)

Previous post: QWERTY on History Deserves to be Remembered