When Julia B. Johnson reported for work at the office for Efficiency and Economy in New York City in 1913, her presence was met with chagrin. Johnson, her name having appeared on a list of qualified applicants, had received temporary employment as a typist, but, as the list had not indicated her race, her co-workers were upset to learn that she was African American. According to press accounts, she was temporarily dismissed and then subsequently segregated from the white employees.

That an African American had been “Jim Crowed” in New York prompted a quick denial from Commissioner John H. Delaney, who, according to the New York Times, characterized reports of the incident as a “misstatement of facts for political purposes.”

“No protest has been made to me by any employe,1 and I expect none,” he stated. “Competency is the sole test in this department.”2

According to press accounts, Johnson reported for work on Monday, December 1, holding a letter of employment. “Immediately the room was thrown into a state of surprise, for Miss Johnson proved to be a negro girl. The white girls are said to have protested, and, finally, the newcomer from Yonkers was told she was not wanted at present.”4 (Note the diminutive use of “girl”.)

Undeterred, Johnson sought the aid of Charles H. Templeton, a prominent attorney from Albany, who approached the deputy commissioner, pointing out that civil service rules prohibited discrimination based on race. The deputy commissioner acknowledged the point, and Johnson was told to return the next day.

Then, for a second time, she was barred from the office.

Accounts of her dismissal appeared in newspapers across the state, prompting Commissioner Delaney to issue a statement that Johnson had not been dismissed on account of her race, but that it had not yet been determined if temporary typing assistance was actually necessary. He did not explain why she had received a letter of employment. He also denied that anyone in the office objected to her on account of her race.

Ultimately, Johnson was allowed to return to the office, though not without further discrimination. The New York Age, a prominent African-American newspaper, reported on December 11 that she was segregated from her white co-workers. With editorial flair, the newspaper denounced the “Jim Crowing” of Johnson and called the action “un-American.”

The Age added that “[t]he colored typist wishes it thoroughly understood that she is not working in the office of the Commissioner of Efficiency and Economy because of any desire to associate with the white working girls, but that she has the same object in view as her Caucasian sisters — to earn an honest livelihood.” (A similar argument was advanced generally by women to answer the objection that typing was unladylike.)5

The early 20th century was not an age of racial equity, and Age appealed to whatever logic might advance the cause, as the calculated use of the terms “Jim Crowing” and “un-American” indicate. That the action was simply unjust was not, unfortunately, adequate.

The paper concluded, writing, “Any attempt of the Democrats at Albany to ‘Jim Crow’ the colored clerks will be stubbornly fought by the colored citizens fo the State of New York, who pay taxes on property valued at nearly $7,000,00. As their money helps to pay those who would discriminate on account of color any attempt to draw the color line in the departments will be resented.”

I do not know what ultimately became of Julia B. Johnson, but this incident reveals a number of important details about her character: she was driven to advance her economic position, as evidenced by her seeking employment as a typist and her appeal to legal counsel when denied that employment; and, she was actively engaged in her struggle, as evidenced by her statement to the The New York Age — that she was seeking honorable employment among her “Caucasian sisters.”

Charles H. Templeton was an attorney of some renown (a man of the same name argued cases before the Supreme Court). Though his racial identity is not stated in press accounts, he was a member of Theta Nu Epsilon, and it may be safe to assume that he was white.

John H. Delaney was a prominent Democrat, serving as commissioner in a number state and city offices. Apparently there was (is?) a monument to him in a New York subway. (See this New York Times writeup: John Delaney Retires.)

Any additional information from the reader would be appreciated. Please contact me at netadams@gmail.com. 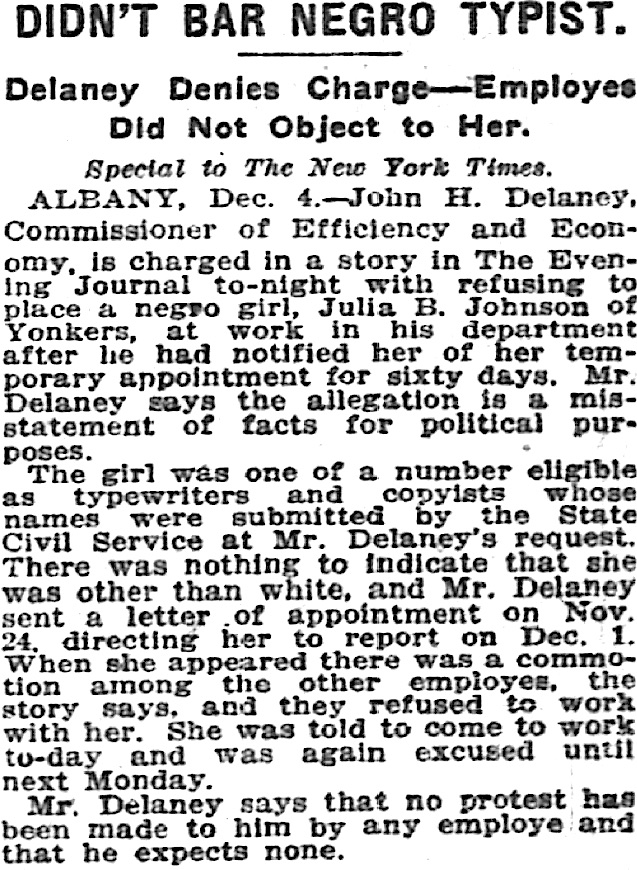 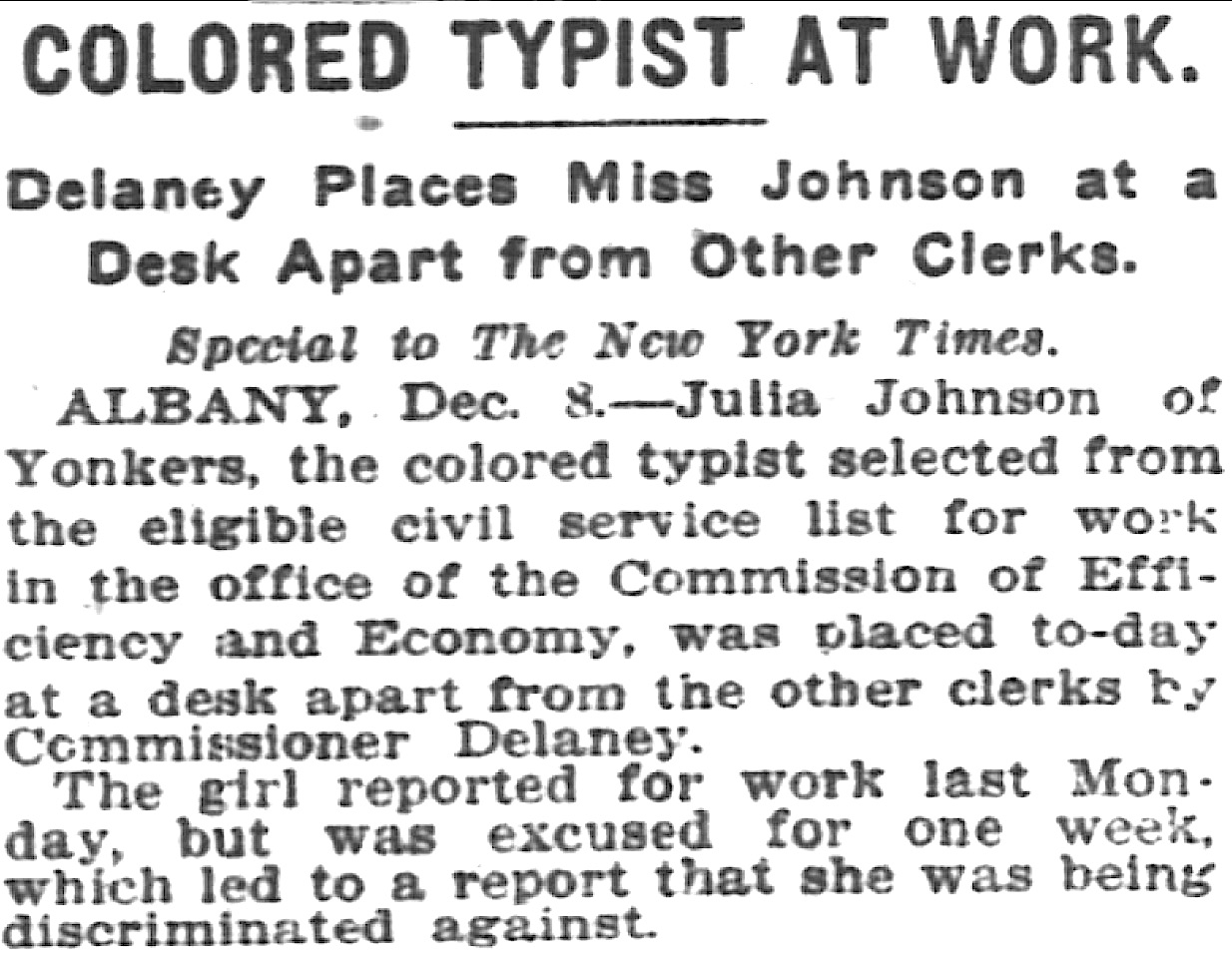 "The Struggle Staggers Us"
Typewriting opened doors for African-American youth

Previous post: His fogginess not to be presumed upon