As I scour digital archives of phonographic journals, I’m always on the lookout for a previously unknown machine, which is no small task given that collectors have exhaustively researched the subject. Occasionally, I come across a fraudulent machine, which either never existed or else fell wildly short of expectations. To this, I add the “Fay.”

Based on the description below, the Fay sounds a lot like the Ingersoll index typewriter:

“This labor saving article consisted of a pasteboard box, marked in red letters, ‘For the amusement and instruction of children,’ which contained a piece of wood about 1 foot long and 6 inches wide. Little standards supported a wire on which were strung small cubes of wood, with letters painted on the upper surface and roughly cut on the lower. At each end of the board was an ink made, but the blocks could not be used for making any impression but a blot.”

The Ingersoll typewriter dates to as early as 1885, and was marketed as a “domestic” typewriter for children.

In 1889, John T. Lattimer marketed the Fay in a post-card campaign, advertising the device for $1.35 and claiming it could do the work of a $25 machine. However, the Fay could scarcely do the work of a $1.35 machine! Wrote one reporter, “What amusement a child could derive from the affair would be beyond comprehension.”

Authorities investigating Lattimer noted that his customers numbered in the hundreds and many were lawyers. Lattimer apparently had been passing the Fay off as a real typewriter, and not a toy, which led to criminal charges. For a time, he was pulling in $200 to $300 per week. How many he distributed is unclear.

The Fay may be an alternate branding for the Ingersoll or perhaps even a knock-off. ETCetera featured the Ingersoll in its December 1990 issue (see here). According to a press account (below), Ingersoll sold some 12,000 machines (only a few are extant today). 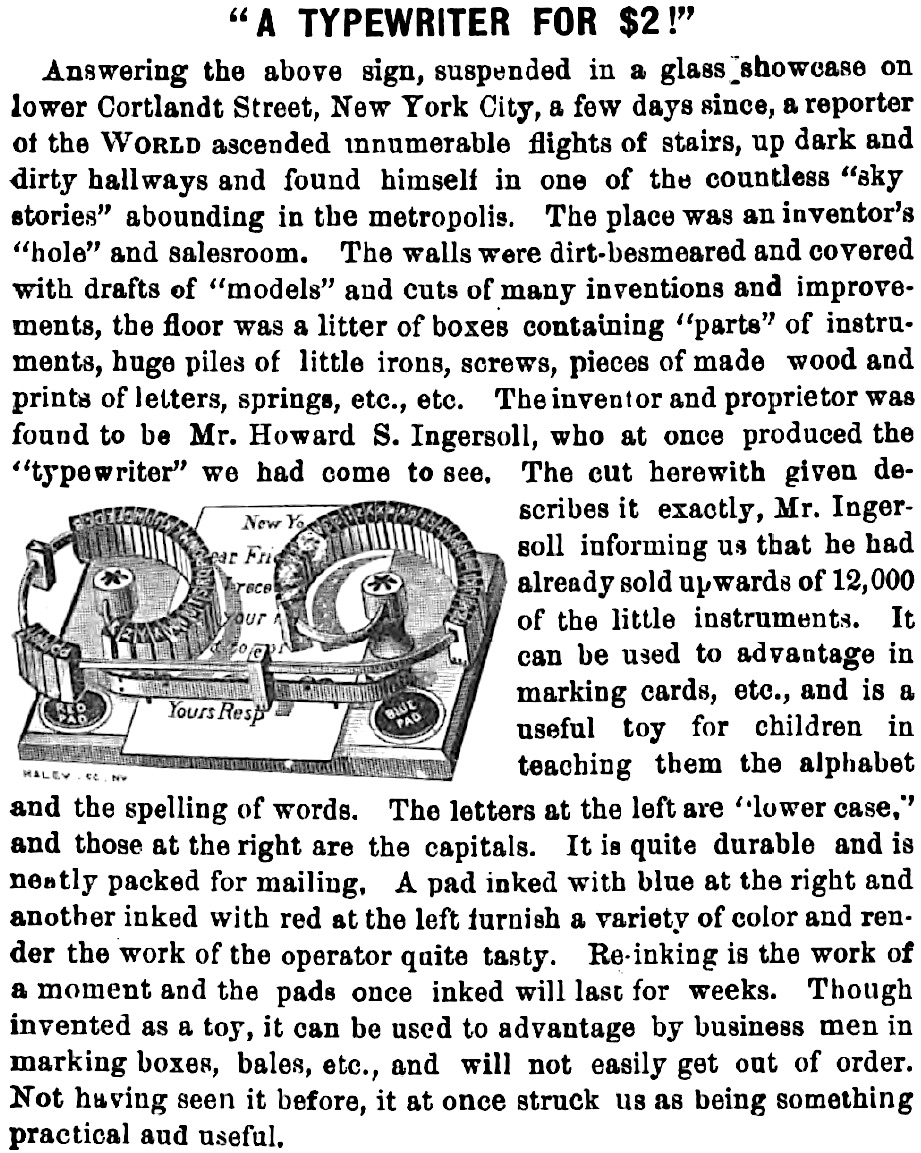 Previous post: “Oh, that my words were written with an iron pen”