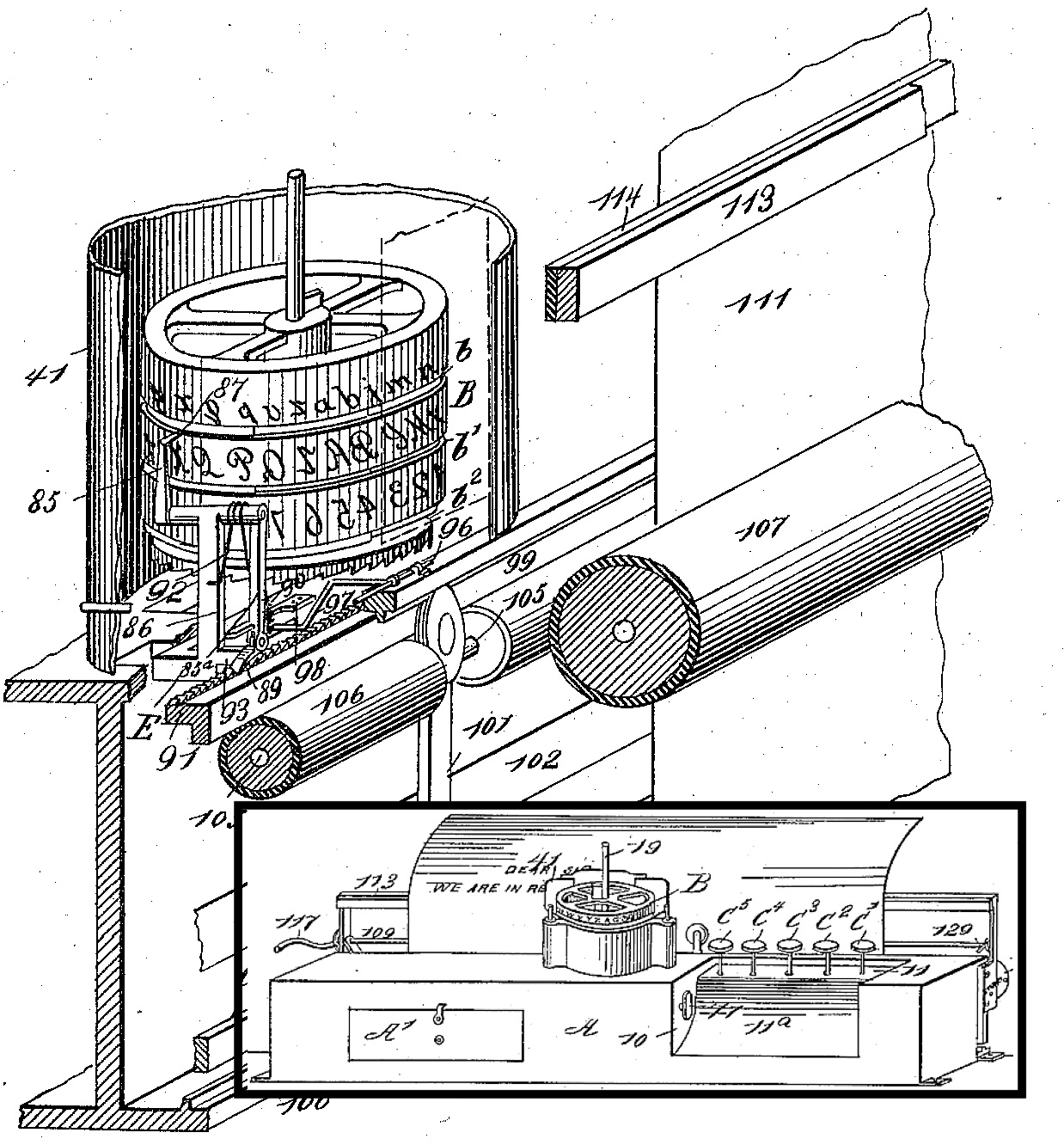 Composite image from an 1897 patent.

Manuel Sebastian Carmona worked steadily on designs for portable typewriters from the mid-1890s through at least 1900. Whether any of his designs reached production is uncertain, but his concepts anticipated folding portable and ultra-portable typewriters. Residing in Mexico City, Carmona also engineered a two-stroke engine and headed a patent office in his home country.

Carmonas are not found in any typewriter collection, but the influence of his concepts is evident in other machines. 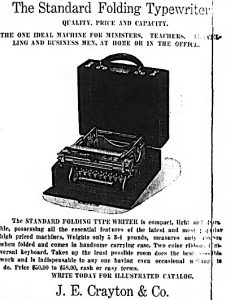 One of Carmona’s patents was discussed in legal proceedings between the Standard Typewriter Company (later, Corona) and the Standard Folding Typewriter Sales Company, which had been established to sell the former’s folding portable typewriter. The Sales Company sold its contract but continued to market and manufacture the machine, so in 1910, Standard sued for patent infringement. In 1913, a court ruled that Standard’s patent describing a folding platen had been anticipated by Carmona and others (Conde in 1894 and Sholes in 1896); as such, Standard’s claim of ingenuity was not valid. This ruling was affirmed in 1915.1

How the companies ultimately resolved their differences is unclear, but the decision permitted the Sales Company to manufacture the No. 2 model of its aluminum-framed portable, which sold modestly (if at all). That machine was superseded by the massively successful Corona 3, which was the property of the Standard Typewriter Company.2

Later, Corona (formerly Standard) sued the Fox Typewriter Company arguing that Fox infringed upon its folding mechanism patent. Following the previous case, Standard surrendered and then reapplied for a patent, narrowing its claims so that its device would not have been anticipated by Carmona. In the second case, a court ruled in 1920 that patents issued to Carmona, Conde, and Sholes were “incidental;” therefore, Corona’s mechanism was sufficiently unique and protected under law.3 The Fox Typewriter Company ceased operations shortly after this ruling and was unable to appeal the case, which was anticipated by industry experts. 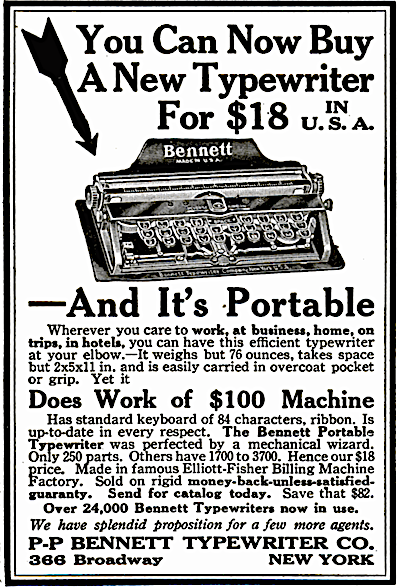 Carmona’s designs seem also to have influenced the Bennett portable typewriter. This connection is somewhat tenuous, but the compactness of Carmona’s machines seems to have anticipated the design of the Bennett typewriter: each employing type elements and micro-keyboards. Further, it is worth observing that two Bennetts, bearing the initials H.F. and J.F., were witnesses to one of Carmona’s patents (US 638,092). Though this detail is possibly coincidental, the prospect of a connection is intriguing. (I have not been able to identify these Bennetts.)

Charles Almon Bennett introduced his machine in 1907, which is considered as having the “smallest keyboard on any typewriter ever made.”4 Quite remarkably, it featured a full, three-bank keyboard whereas all of Carmona’s designs sported a five-key arrangement. Carmona’s machines were noted in American trade journals and could have been known to Bennett.

Five successive designs indicate that Carmona was serious in his effort to manufacture an ultra-portable typewriter, and one wonders if any working models were constructed. The increasing detail of each design suggests he was attempting to work out certain difficulties. Of his five machines, two employed type wheels, two typebars, and one a type band. These attempts appear to have been a private effort as none of his patents was assigned to any company.

The fundamental component of his design was an ultra-compact, five-key typewriter. By modern standards, such a machine would be regarded as a stenographic device, but Carmona intended his devices for general use (inclusive of stenography). From the mid- to late-1800s, the dominance of a full keyboard was not always assumed, though, in practical terms, it predominated. Even John Pratt, whose mid-century designs predated the Sholes & Glidden “type writer,” contemplated a keyboard in which combinations of keys could be punched for different characters. He also designed a machine for which each character was assigned its own key.

Carmona’s five-key design was panned in the 1915 case, in which one expert wrote: “The Carmona machine appears to have been a difficult one to operate. There were seven characters which required all five keys to be pressed at once. This could be done by pressing down ‘with the entire arm or hand.'” This assessment might be overly harsh, but a five-key arrangement would have presented a steep learning curve to the operator.

There is scant biographical data on Carmona (what there is, I include at the end of this post), but he left behind a legacy of creativity and ingenuity. Below are descriptions of the principal characteristics of his five patents.

Note: The model numbers are my own invention.

The first of his machines introduced a five-key typewriter employing a type wheel similar to the Blickensderfer element. The operator of the machine pressed different combinations of keys to produce characters and figures. One of the actions produced a blank space, as this machine did not have a dedicated space bar.

Still a five-key machine, but now with typebars instead of a type wheel. The operation, however, remained the same:

“To obtain a letter, character, or space it will only be necessary to press one key or several keys at the same time. Thirty-one characters are obtained in this way, that being the number of combinations obtained with five keys. Two allxiliary lever-key’s are arranged in such manner that they can be moved by a slight inclination of the finger designed for operating the corresponding main key, thirty-one other characters being thus obtained twice Over, so that the total number of characters that can be obtained with the two auxiliary lever-keys in connection with the main keys is ninety-one.”

This model was a visible typewriter, as was the other machine patented that year:

Like the very first model, this version employed a type-wheel element. What distinguishes this machine from the 1897 machine is extreme compactness, the height of the machine being reduced by some considerable measure.

The two Bennetts witnessed the patent for this machine.

Carmona stressed that this machine was a general purpose typewriter: “Another object of the invention is to so construct the machine that it will not be necessary to double the paper in any way. Consequently, the machine can be used to write with equal facility on thick or on thin paper, postal cards, visiting-cards, or any other suitable substance, as well as celluloid, metallic plates, parchment, &etc.” 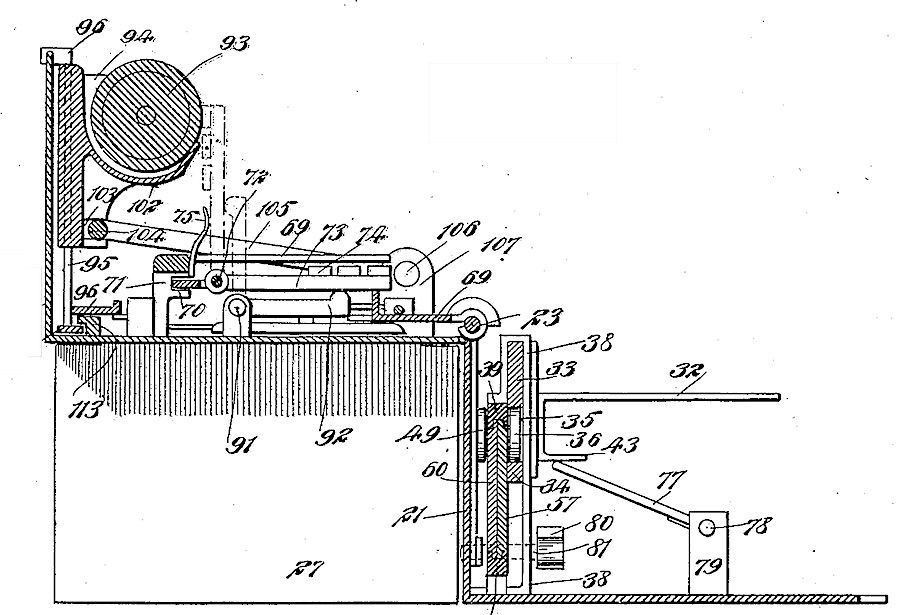 The fourth model was less compact than the prior models, though still very portable, and employed typebars. Working alternately between type elements and typebars, Carmona sought out a design that would yield a highly functional, ultra-compact portable typewriter.

Perhaps the most novel of his machines was this last design that employed neither a type wheel nor typebars but employed typebands. Three independent bands carried leters and figures to the printing point, allowing for a stunningly compact design. How well these typebands worked is unknown, but the idea certainly had promise. Carmona spent considerable time describing these typebands in the patent filing, which constitutes a very unique system for impressing characters.

I have not yet been able to establish when Carmona was born or when he died, though he is spoken of in the past tense in the 1915 legal case (“Manuel S. Carmona was a citizen of the Republic of Mexico, where he resided”). In addition to his five typewriter patents, he held a patent for improvements to a two-stroke engine and he headed the patent office in Mexico.

Here is the biographical data I could locate: 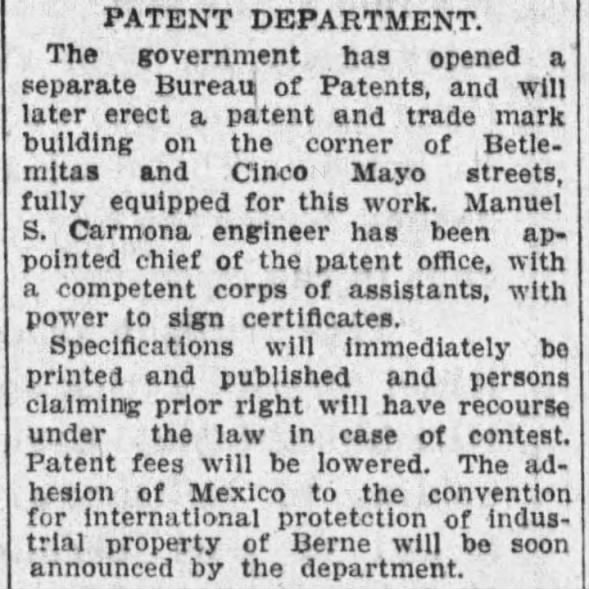 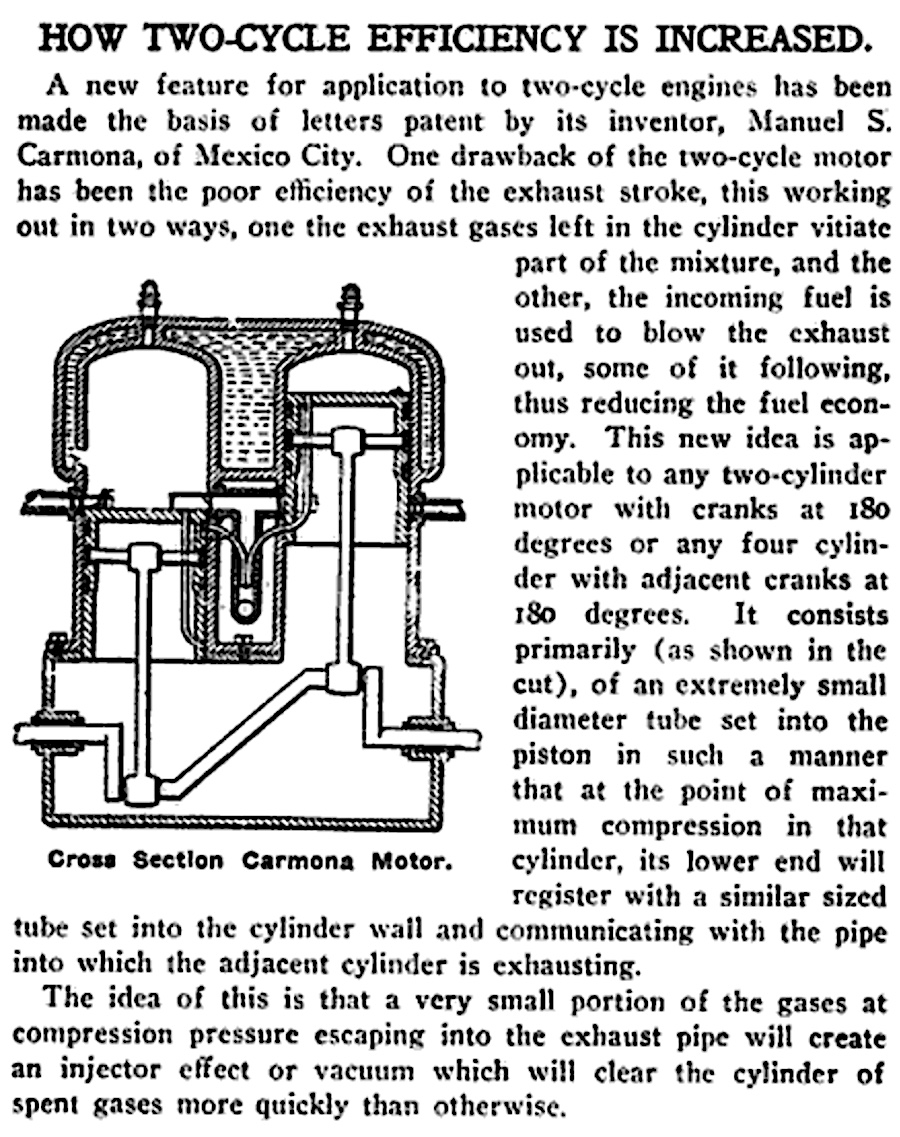