More on the famous baby scholar 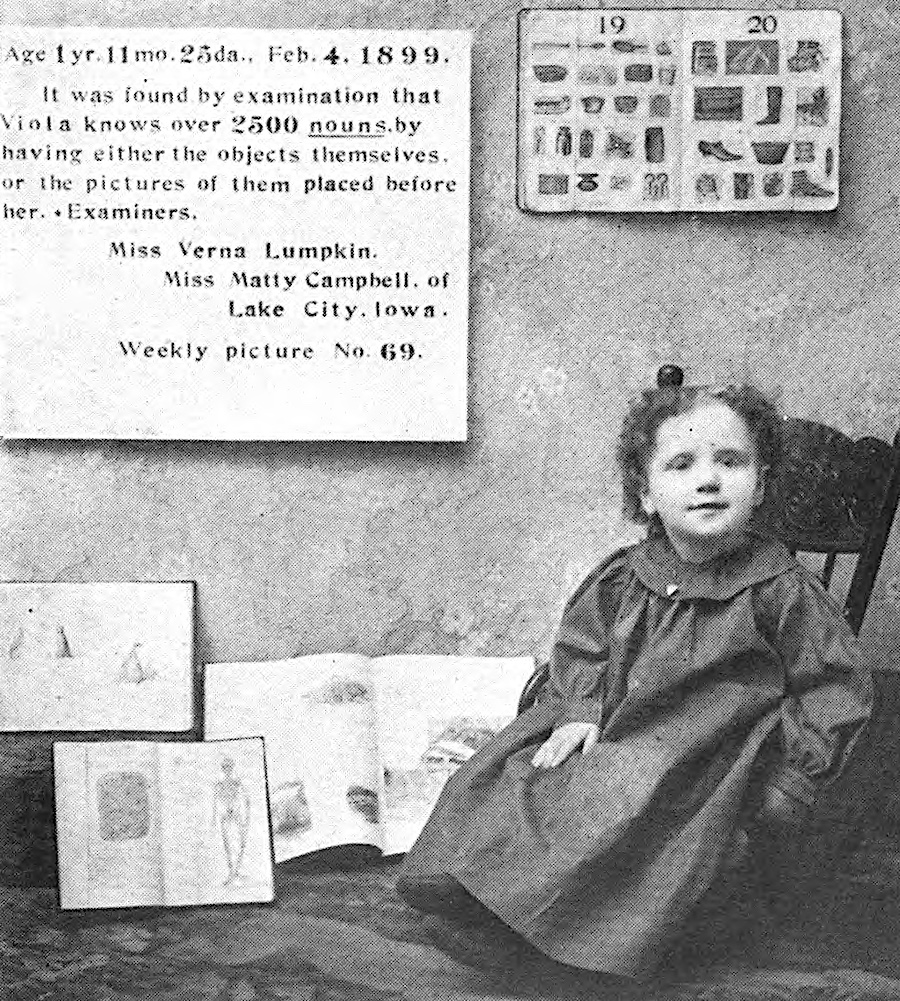 Her life began as a social experiment: how best to raise and educate a child — and for a time, she was world famous. Viola Rosalia Olerich was a child prodigy whose progress was carefully monitored and documented. Around the early 1900s, her adoptive parents Henry and Henrietta (née Van Delden) Olerich photographed her accomplishments weekly and publicized her progress steadily (not unlike parents today who document their children’s accomplishments on social media). Her father believed childhood could be managed scientifically, and his home became the laboratory. The experiment was not entirely successful.

Henry Olerich, a professor and superintendent of public schools in Lake City, Iowa, wrote a book documenting Viola’s early childhood (special thanks to Richard Polt for noting this in a comment in my original post here). Viola Olerich, the Famous Baby Scholar is an unsentimental account, reading like a researcher’s field notes, not a parent’s doting diary. 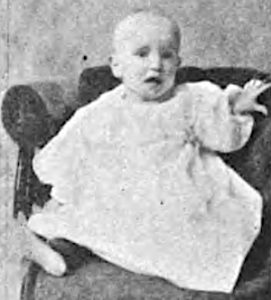 Viola, shortly after her adoption.

“Our chief object for adopting a child,” wrote her father, “was to test, in a practical way, a new theory of education, which we believed to be much superior to any educational system which has heretofore been used.”

He continued, “No attempt was made to select a particular child; on the contrary, we desired to get an average child, hence physical health was the only point of pedigree which we regarded of vital importance, and even of this we knew little or nothing.”

The tone is distressing, but paternal feeling may be masked by the mode of writing. The book was intended as a scientific case study.

Professor Olerich described his method as making work seem like play, though how exactly he knew Viola wanted grammars and not dolls is not explained. The professor described that she was not harshly treated (corporal punishment was not practiced) and that her various interests were fostered freely.

There is a “romantic” element to the program: Viola apparently decided much on her own — when to eat, when to sleep, etc. — but there is also an intensely “controlled” element. The frivolities of childhood do not appear in her father’s account.

Viola was the ideal child, but never simply a child.

Though affection seems lacking in the narrative, her father maintained that kindness was the cornerstone of the experiment:

I have always treated Viola with the utmost kindness and courtesy; have never even spoken a loud or harsh word to her.

It is my opinion that every “bad boy” and every “bad girl” has been made bad by meddlesome interference. It has been said: “Spare the rod and spoil the child,” but modern science, as well as common sense, is beginning to say: “Destroy the rod and refine the child.” Intelligence, kindness, and freedom are, no doubt, the only factors that can really reform and refine the world.”

That science could improve humanity was the underlying principle of the experiment, and in the early 1900s, science was viewed as the key to a better society. Humanity could progress through science. 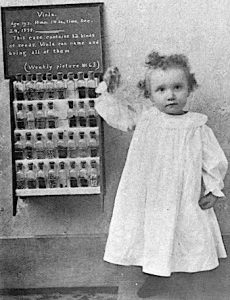 Viola and her seed collection

Viola’s childhood was measured entirely by academic accomplishment. At no time was she asked about her feelings or interests, and happiness was simply a quotient of learning. In the dozens of photos of her early childhood (she was perhaps the most photographed toddler at the turn of the century), she appears almost expressionless. By her own account, expressed years later in a variety of press accounts, her childhood was not entirely happy.

“Children my own age wanted nothing to do with me,” she told a newspaper in 1975. “It was kind of lonely.”

The “famous baby scholar” was interviewed at various times throughout her adulthood, and while she never spoke of her father or mother with much affection, neither did she speak of them with resentment. She made it plain, however, that she intended to raise her own children differently.

Her own education ended in the eighth grade when her mother suffered a stroke and someone needed to act as her caregiver. Viola, 13, stepped in. While she remained a lively reader, she focused her attention on her family. Her own children would not be raised as child prodigies, though.

Interviewed by the Munice Evening Press in 1924, Viola, now a mother of a young daughter, she expressed an enlightened view on child-rearing:

If the body is strong and healthy now, learning will come easily when school age is reached.

I’m exerting no effort to make her prodigy. Of course, I shall help her all I can throughout her school career. But now I want her to be just like other little girls.

After all, taking care of a child’s physical needs, together with the ordinary amount of discipline, seems to me about the most important duty of a mother during the first few years of her child’s life.

And that’s what I am trying to do.

The “experiment” of her early childhood ended when her father soon took employment in industry just before Viola entered kindergarten. She skipped a number of grades before being held back (something she appreciated afterward, for it restored a sense of normality to her childhood), and while she was quite advanced as a student, her learning was ordinary. She never returned to school after becoming her mother’s caregiver.

In 1918, she married John W. Storms, and the two were married just over 50 years. They raised three children. Viola kept her early fame from her children, preferring to live in the present. Her past, she contended, belonged to someone else: Baby Viola was hardly the person she had become as an adult.

Her son John commented to the Quad-City Times in 1975, “I was almost a straight-A student all through school. I guess she thought it would have burst my bubble if I’d know how much smarter my mother was, even as a baby.”1

In the same story, Viola reflected: “I had three children and I didn’t want to educate any of them as I was educated. I don’t think you do a child a favor to do that. I’m not sorry, though, that it happened to me. Anyway, now it seems that it all involved someone else.”

Viola, the one-time baby scholar, and later matriarch, died in 1994. She was survived by her daughter Virginia, her son John, eight grandchildren and 14 great-grandchildren. She had lived a full and accomplished life. 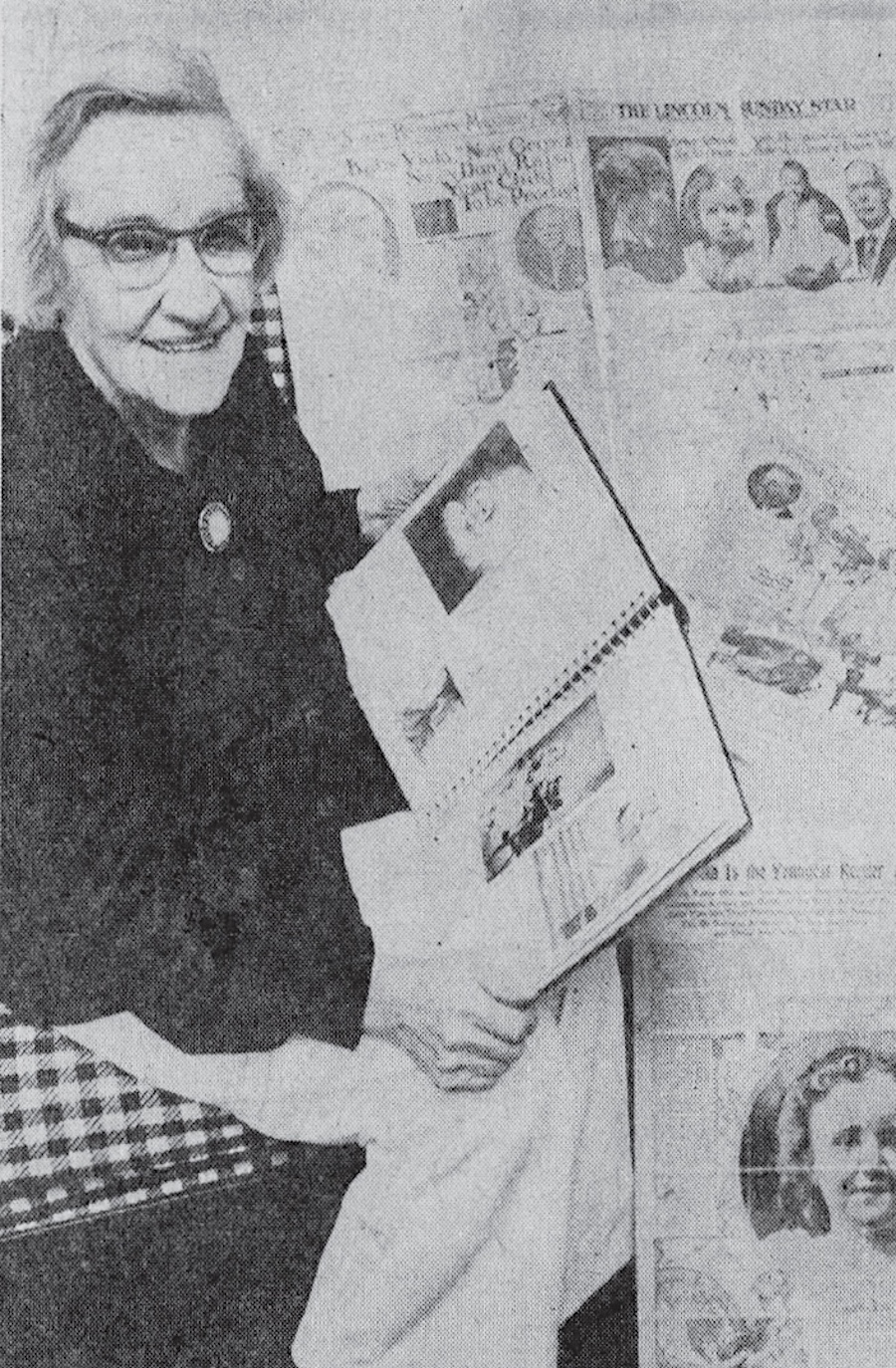 Viola in 1975, holding a scrapbook of her early childhood.

I am not a parent, but I have worked as an educator for some 20 years, and served as a youth pastor (concurrently) for an equal number. I have watched many families grow and mature and watched parents struggle to find the best way to raise their children. There is certainly no one way to raise a child, nor does it appear that there is any right way to raise a child. Science and religion can play a part, but what I’ve observed is that love and affection are the common denominators of successful parenting. As the scripture says, “Love covers a multitude of sins.” None of us is perfect.

Many parents have expressed to me that they would have acted differently, done differently, had they known what they now know. But we can’t raise children with this knowledge. We can only live in the present and with our present (unenlightened!) selves.

What is tragically lacking from Viola’s story is any sense of compassion, love, or affection. Her father only spoke of her as an experiment (her mother’s feelings do not appear to have been recorded), and the world viewed her as a novelty. The idea that there was some perfect way to raise a child was tantalizing but ultimately elusive.

We need not find the perfect method, but rather strive to connect compassionately, understanding all along how imperfect life is.

When I look at the photos of Viola, both as a child and an adult, I see someone for whom my heart feels compassion. However, I did not express that sentiment in my original post. There was simply a child at a typewriter, perhaps the youngest typist ever, and I wrote about this child prodigy (though all along knowing there was something more to her story).

Her accomplishments, though impressive, were ultimately ordinary (Viola noted this perfectly: “If the body is strong and healthy now, learning will come easily when school age is reached.”). But she was extraordinary. Not because of what she accomplished or did not accomplish, but because she was an expression of love and compassion.

We love because we are loved. 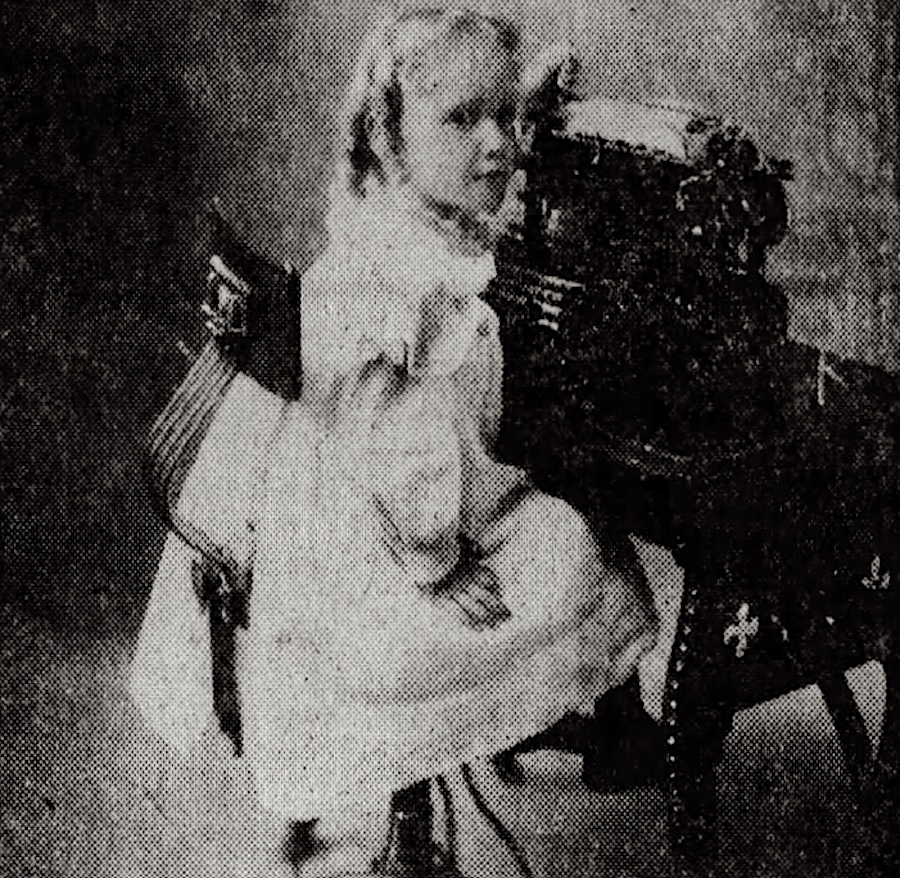