Horton’s Typograph (ghost of the Bennington?)

Industry experts noted early the similarity between the Horton (left) and the Bennington (right).

Known more commonly as the Horton Typewriter, the Horton Typograph garnered “considerable interest” when introduced in 1882. Its inventor, Edward E. Horton, was a court reporter and vice president of the Canadian shorthand society, and one of the many stenographers who endeavored to build a better writing machine. Remington typewriters were esteemed, but stenographers badly wanted a machine with visible typing, something Remington would not offer until 1908.

(Quick primer: Early Remingtons struck the underside of the platen, the writing being out of view.)

The slew of visible typewriters that followed did not always live up to expectations. The Oliver functioned well and was successful, but most others fell short of expectations. The Horton, for its part, never even emerged as an actual product, and absent financing, the company folded after many years of promotion (see Robert Messenger’s post here). Only a few Hortons were ever made over a period of several years.

The editors of The Phonographic World compared the Horton to another machine of similar design (see below), observing that there is “nothing new under the sun.” That machine, by Byron A. Brooks, later developed into a moderately successful product, and Brooks himself found success with the Remington Typewriter Company. Among his many accomplishments was case shifting (upper and lower case writing) for the Remington Standard No. 2 in 1878. 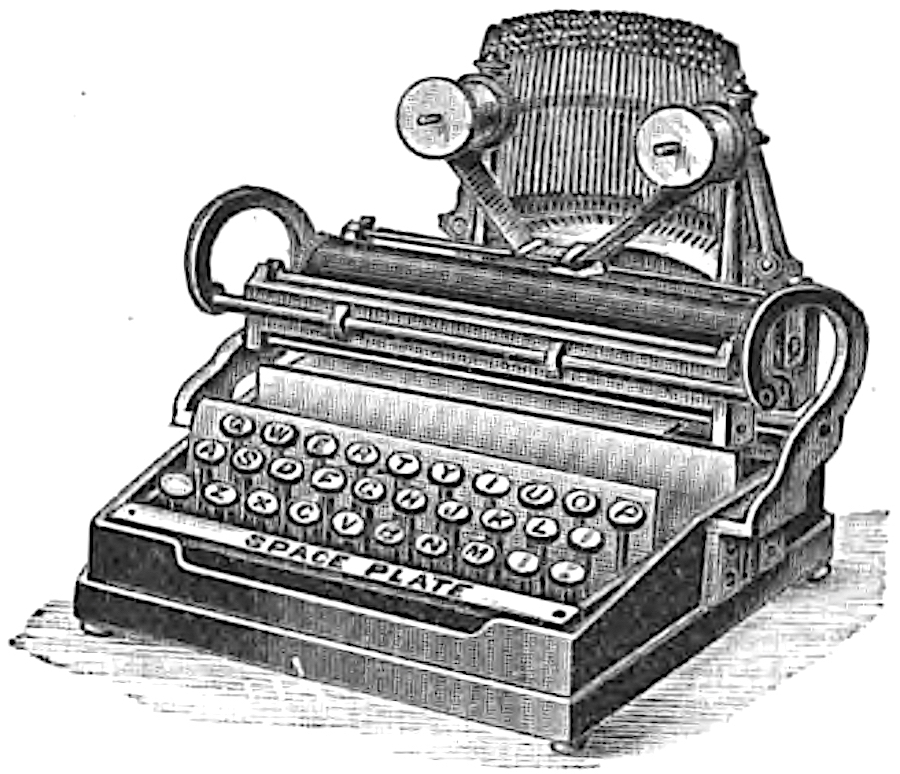 This typewriter, by B.A. Brooks, reflects a pattern in the design of some visible typewriters. See story below.

The Bennington Typewriter, which was issued about a decade after the Horton, was not favorably reviewed for its boasted improvements. Wrote The Typewriter and Phonographic World in 1903 (full text below), “[J]udging from the illustration of the ‘Bennington,’ its ‘inventor’ must have realized that in typewriters there was ‘nothing new under the sun,’ for it appears to embody, for the most part, all the exploded ideas in typewriters of a decade past.”

The publication observed that it looked frighteningly similar to the old Horton. 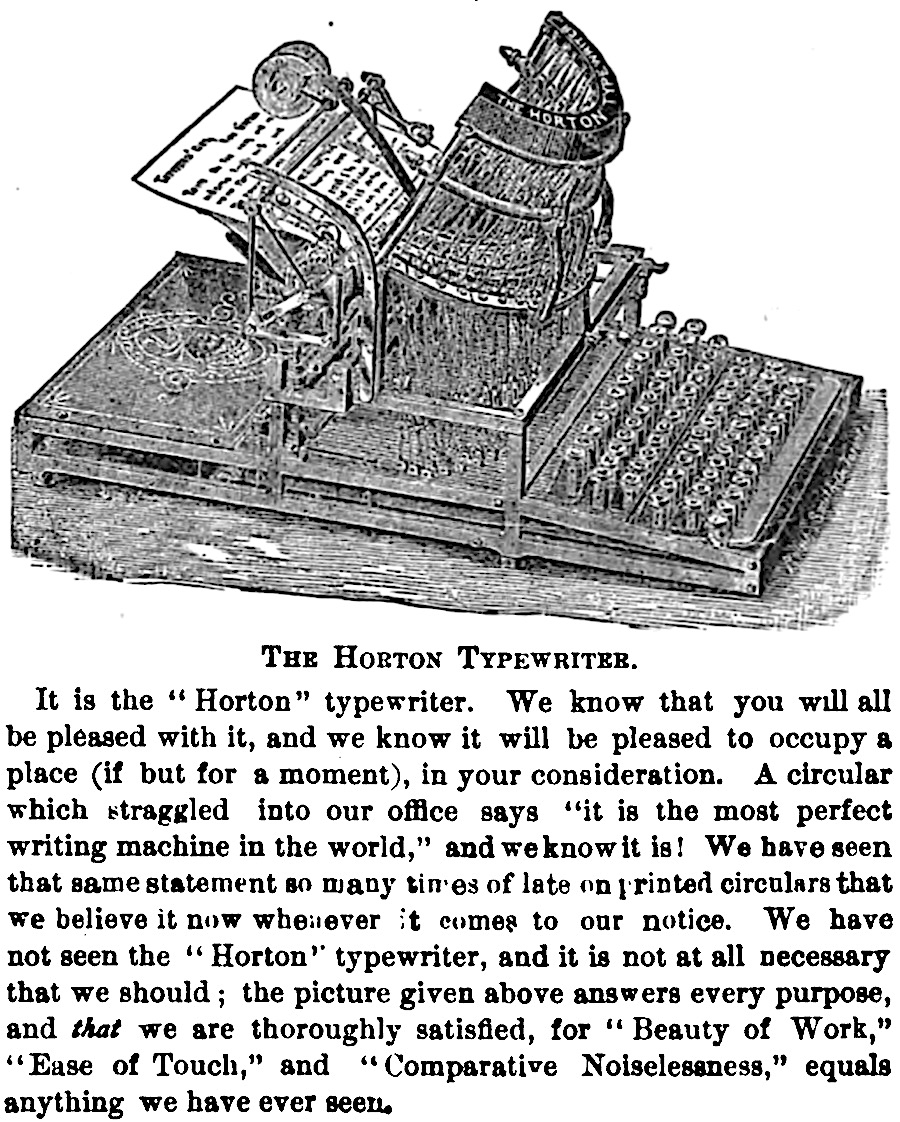 On the Brooks Typewriter:
The Phonographic World (New York), January 1887 — 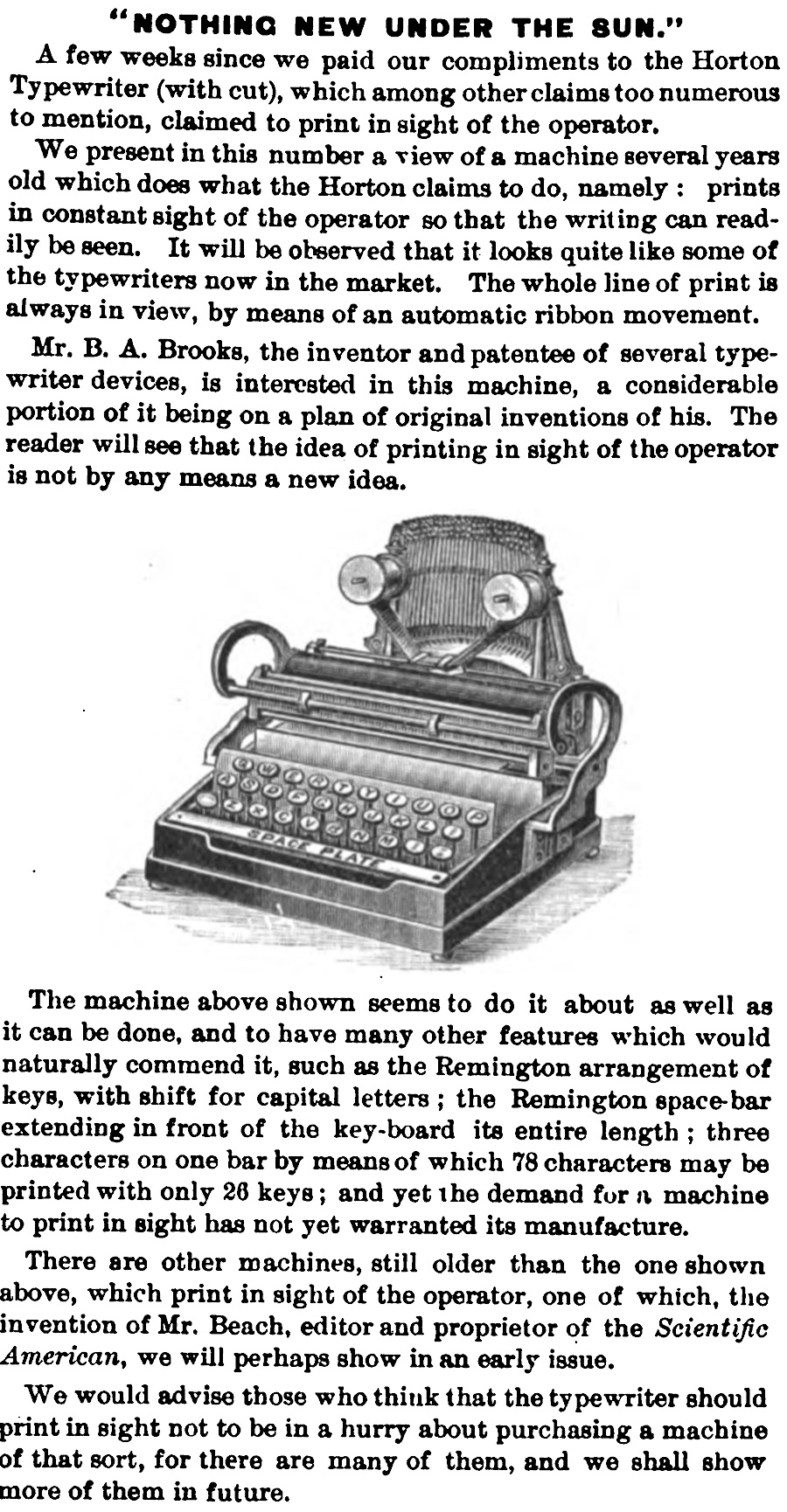 On the Bennington/Horton similarity, The Typewriter and Phonographic World (New York) July 1903 —

The Era Typewriter (aka Bennington & Xcel)
1820: Duplex Typograph by J. Purkis
Oliver on why the Oliver was so different
The "Stanograph"