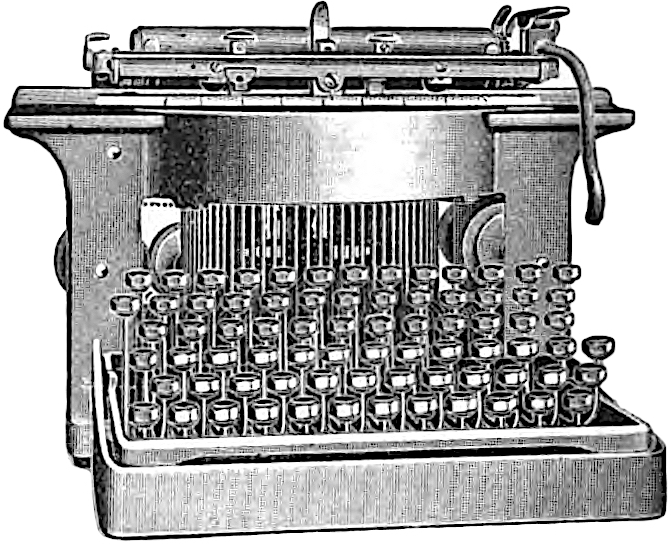 John M. Fairfield formed the Hartford Typewriter Company in 1893, to compete with the newly formed combine headed by Remington. The “anti-trust” company offered the Hartford at $50 in 1894, about half the price of a “trust” machine.

The Hartford Typewriter Company was formed with $60,000 in capital stock or 600 shares at $100 each.1 Fairfield, who had previously worked at the American Writing Machine Company, headed the company as president, and he designed at least three models of the Hartford. 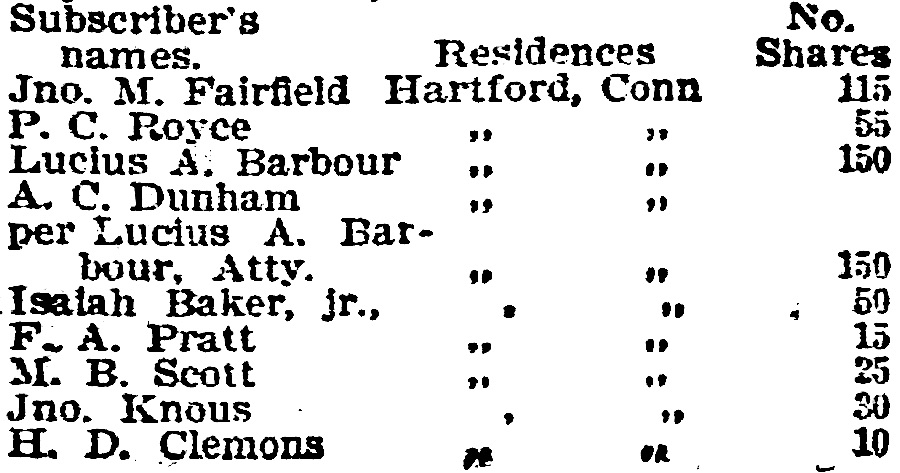 Initially, the Hartford was marketed on the East Coast, sometimes at bicycle dealerships. In 1898, the company announced that it had sold 2,500 machines with distribution expanding throughout the United States and beyond.3 After five years of operation, the actual total was only modest.

The Hartford Courant reported that machines were sold in Italy, Japan, and Australia, and that “about half the product of the factory [was] shipped to the London agency.”4

One employee of the company gained notoriety, having absconded with a 16-year-old girl and subsequently fleeing jail. Henry A. Chase, a toolmaker, was described as a “first-class workman and a smooth talker.” He was serving a one-year sentence for his crime, and the girl’s whereabouts were never discovered.5 The company’s founder was a man of considerable esteem, serving as an alderman in Hartford, Connecticut, and then as the president of a water board in the same city. He won the latter office by a vote of five-to-one.6

Fairfield’s strategy was to undercut the trust, which his former employer, the American Writing Machine Company, had joined. The Hartford Courant wrote that Fairfield believed “the concern would win deserved success… in putting on the market a first-class machine at a little above cost, relying for profit on the size of the output.”7 Such a plan would require exceptional sales.

Fairfield was said to have inherited his technical skills from his father, “a man of much mechanical ingenuity and skill and… an artist of considerable merit in his day. He was the inventor of the first repeating rifle ever made in this country but did not patent the invention. The mechanical skill of the elder Fairfield can be traced in several of his children.”

Fairfield worked in a number of industries. In 1890, he designed a small index typewriter called the Dart (see Martin Howard’s article on this device here). He was credited by the Hartford Courant for reviving the interests of the American Writing Machine Company: “In 1887 Mr. Fairfield had built up such a good business for the company, which had been in poor financial condition, that he was called to Corry, Pa., as secretary and general manager of the American Writing Machine company. The works remained in Corry for about eighteen months under Mr. Fairfield’s management when he saw the advantages of having the machine made in this city, and removed the entire plant here in 1888.”

His partnership with the American Writing Machine Company ended in 1892 when the company joined the trust and moved its operations from Hartford. He then embarked upon a plan to produce a home-grown machine for the city.

Details of the day-to-day operations of the Hartford Typewriter Company are sparse, but based on production volume, the company grew only slowly.

In spring 1900, Fairfield retired from the business to pursue his responsibilities on the water board.8 He remained president of the typewriter company, though nominally. Later that year, his health suffered and curtailed his activities. He was later diagnosed with consumption, and he died on January 17, 1901.

Upon his death, the Hartford Courant wrote, “Among his principal characteristics were executive and administrative ability to a marked degree. This was shown in his successful business career. He was possessed of good intellectual power and had the faculty of concentration of mind developed to a high degree. He had inventive genius and although not a trained mechanic had the power to grasp mechanical ideas and carry them out through intelligent direction.”

The Courant’s January 18 account of Fairfield’s life serves as the chief biography of the inventor.

Transitions
The Hartford Typewriter Company continued operations, adding to its line a case-shift (single keyboard) model, which was priced at $60. This was a welcome addition. The American Stationer (Feb. 9, 1901) wrote, “The Hartford Typewriter Company, of Hartford, Conn., is materially aiding both its dealers and the general public by placing on the market a shift key typewriter in connection with the regular full keyboard machine it has made for several years past. It is of interest to know that this company is at present the only individual concern in the world making the two recognized styles of writing machines. It is understood that it is now largely increasing its plant to meet an increased demand, and is expanding so as to cover more thoroughly territories before unoccupied by the firm.”

But sales of the Hartford typewriters were never robust, and the company dissolved in 1902.

In 1922, Typewriter Topics wrote that operations had moved to Cleveland, Ohio, and the Hartford was rebranded as the Cleveland. This is uncertain.9

The Shorthand Review & Imperial Typist, June 1902, wrote, “[The Cleveland] is a single-shift machine put on the market by the Hartford Typewriter Co. It has not, we believe, so far found its way on to the English market, but it employs very similar principles to those contained in the ‘Hartford’ machine, a description of which will appear in the next installment — and a detailed account is therefore postponed.”

Given that Hartford folded in 1902, it is unlikely that the Cleveland was ever sold. 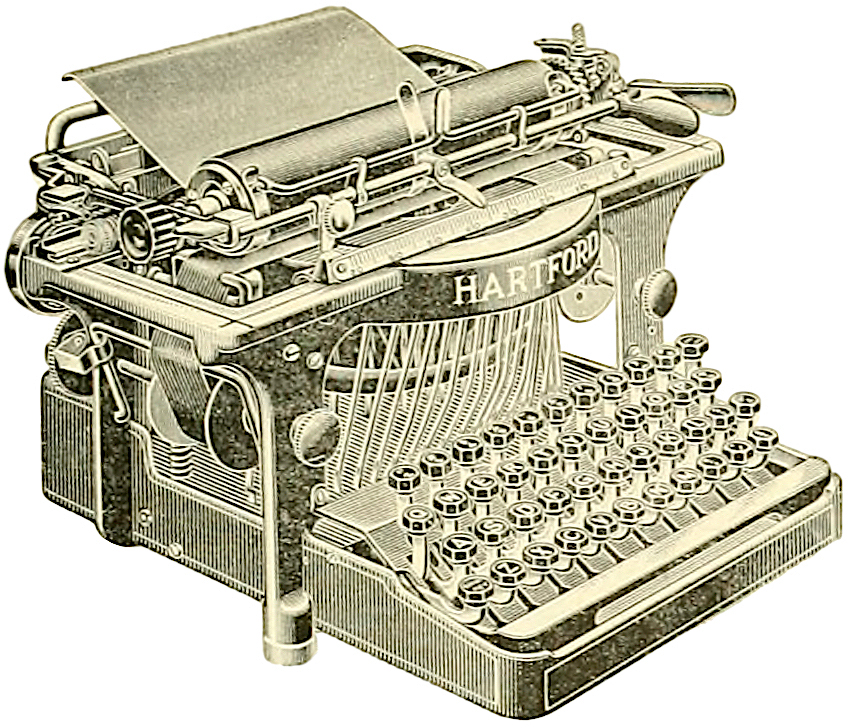 At least three models of the Hartford were offered from 1894 through 1902, though the company claimed to issue a new model every year. That these yearly models differed from the core three is uncertain.

Fairfield filed at least three patents for the Hartford:

The Board of Trade in Handford, Connecticut, offered this narrative of the company in 1902:13 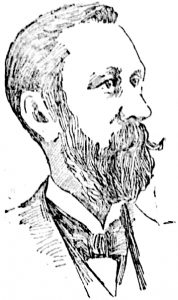 “The American Writing Machine Company, otherwise known as the Caligraph, came to Hartford in the spring of 1885 in a state of collapse. Organized in New York City in 1880, it moved to Corry, Penn., two years later, in consideration of a bonus, and having staid the term required by contract, found its last days worse than the first. At this juncture the concern was brought hither as a very sick patient is sent to the mountains, more from hope than expectation that the change might prove beneficial. The effect was marvelous. Very soon the machine itself was radically improved by our skillful mechanics. Under the able management of John M. Fairfield the debts were paid, the royalty and patent accounts were extinguished, and dividends of forty, fifty, and even a higher rate percent were distributed. Another crisis then arose. A majority of the stockholders who reside elsewhere thought it best to enter the trust.

“Mr. Fairfield, who was left free, reasoned that the period of high prices for typewriters was drawing to an end, and that the concern would win deserved success which took the lead in putting on the market a first-class machine at a little above cost, relying for profit on the size of the output. From this conviction has sprung “The Hartford,” made by the Hartford Typewriter Company, which occupies the upper floor of the Steel Tube works at the corner of Park and Laurel streets. The best tools, machinery, and workmen will cooperate in its production. Although unsurpassed in design and mechanical merit, it will be offered to consumers at one-half the old prices. The capital is entirely free from the deadly element known as water, so that the enterprise starts without handicap of any kind.”

“The Hartford Typewriter Company which has occupied the second floor of the new tube factory of the Pope Manufacturing Company at Hartford, Conn., since February last and which, during the meantime has been building machinery and making patterns for the new ‘Hartford’ typewriter, are now prepared to place their machines on the market, and already several have been delivered.

“The movement and mechanical principle of construction of the new machine does not differ materially from that of the typewriters now in use, but the peculiar feature of the “Hartford” is the fact that it will be sold at $50 at retail, and it is claimed for it that it is as durable, practicable and efficient as the higher priced machines. The capacity of the plant is 700 machines per month.

“John M. Fairfield, for years with the Caligraph Typewriter Company, is the originator of high grade low priced writing instruments, and he believes the field is large for such a machine as the Hartford.”

The Hartford Courant added this on Febuary 2, 1898: 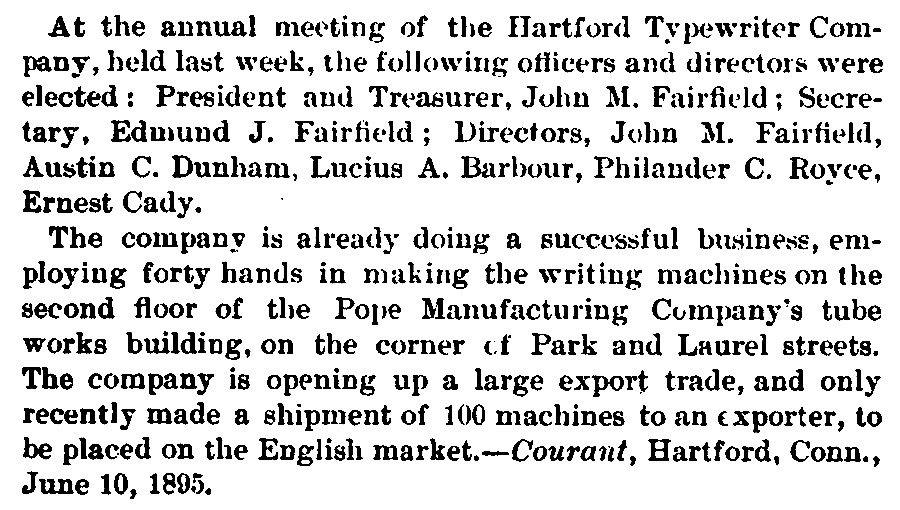 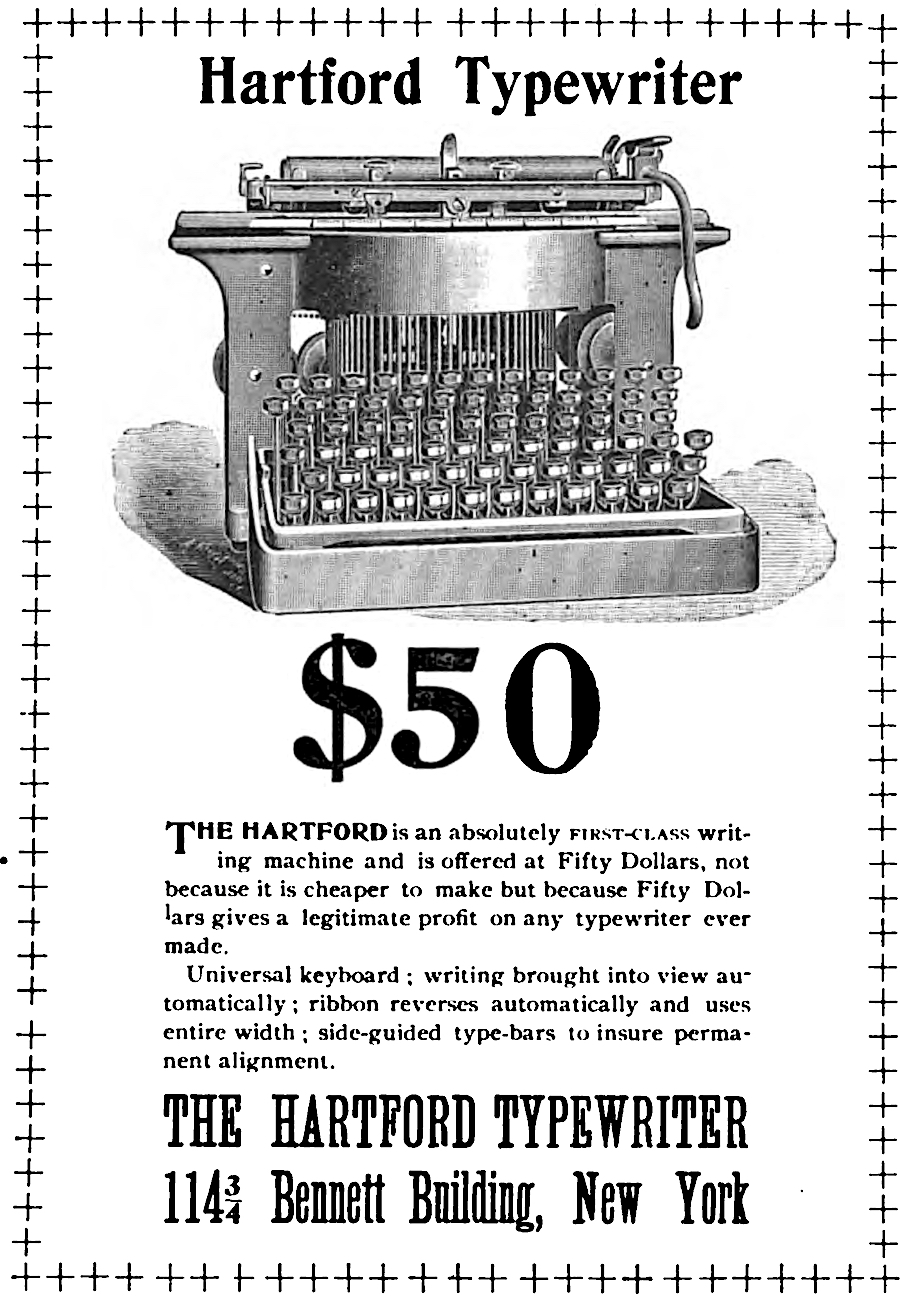 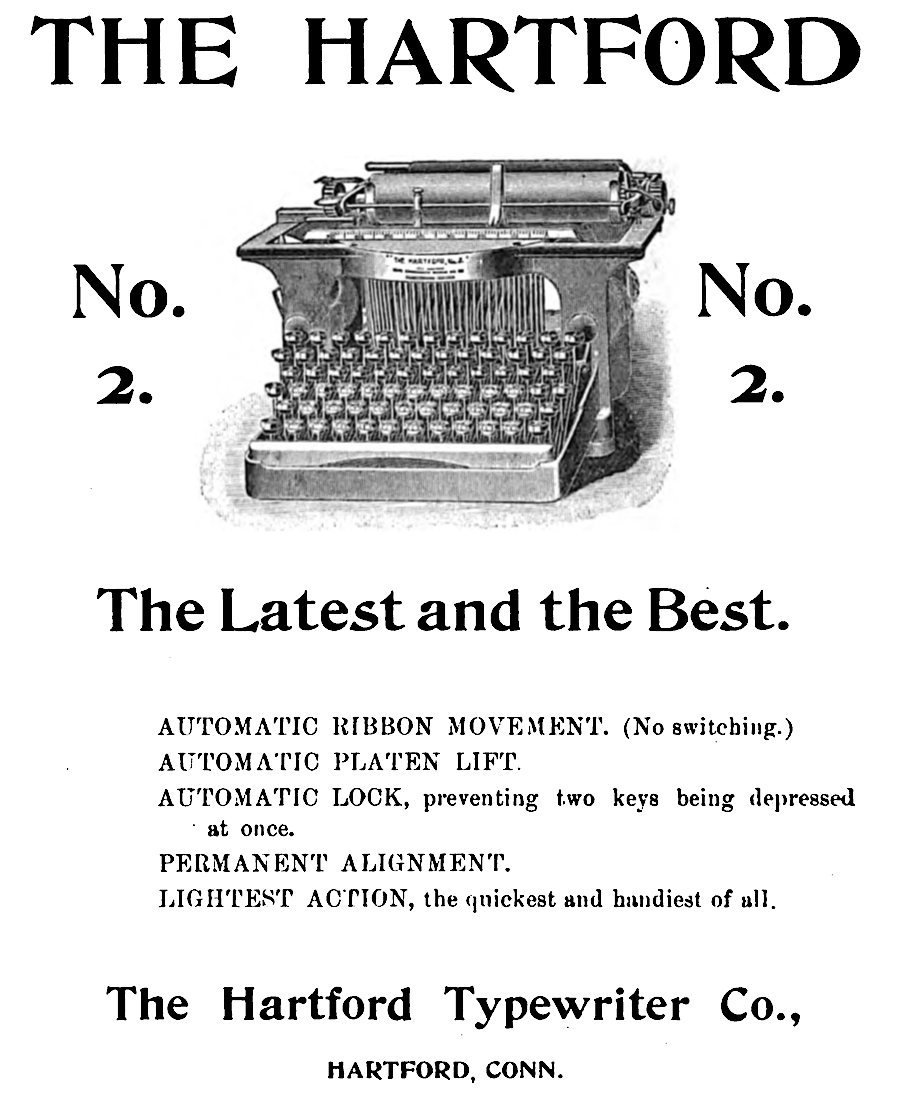 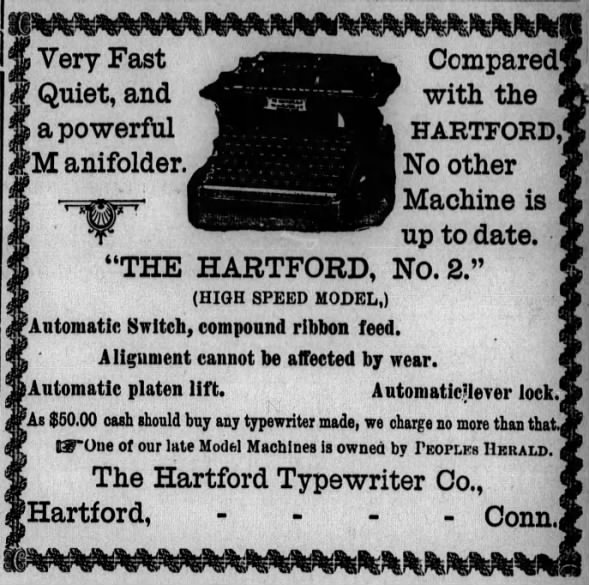 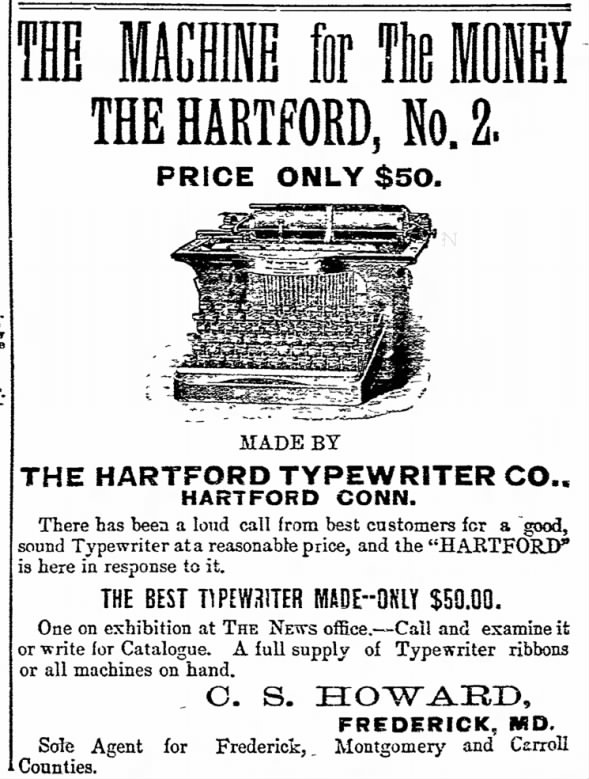 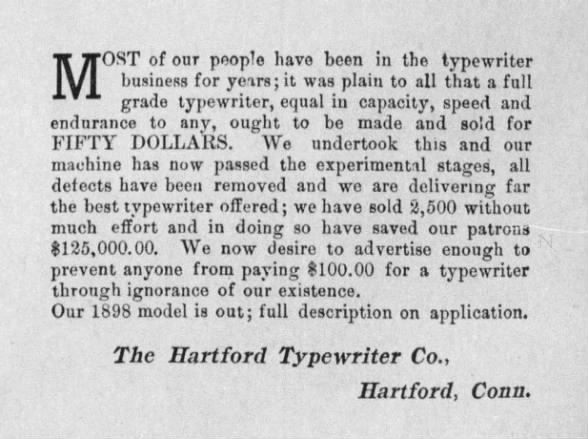 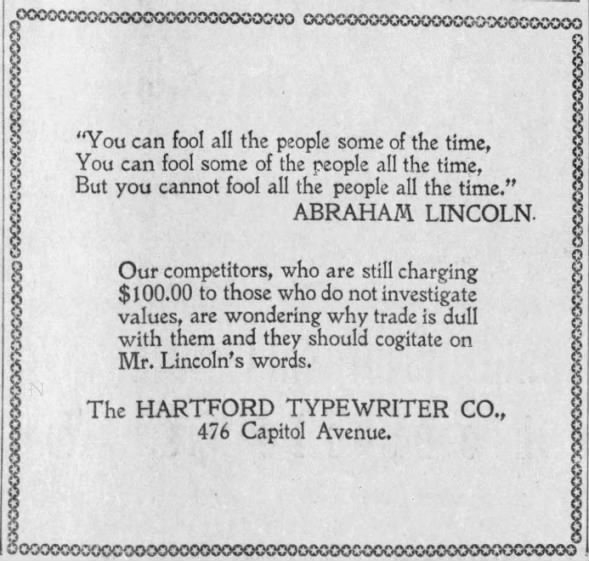 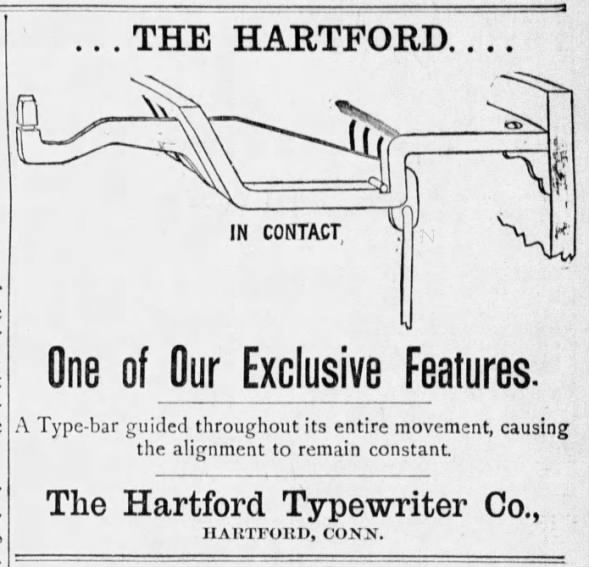 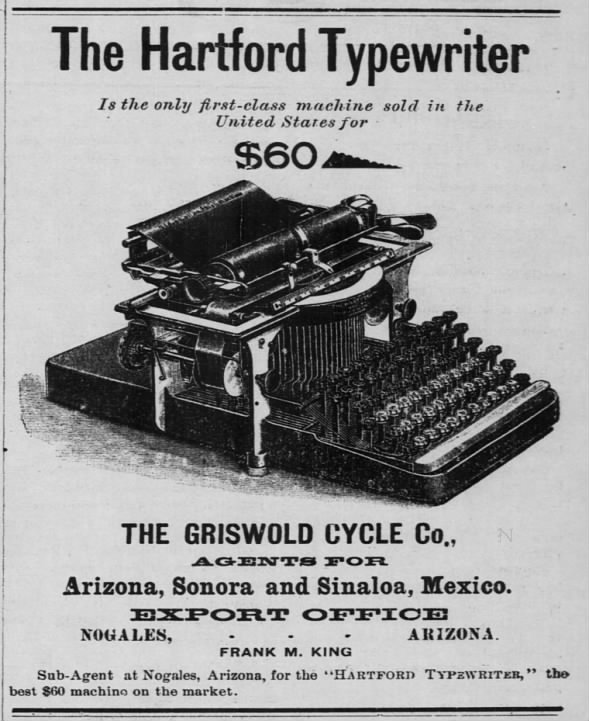 From The Aluminum World, September 1900 — 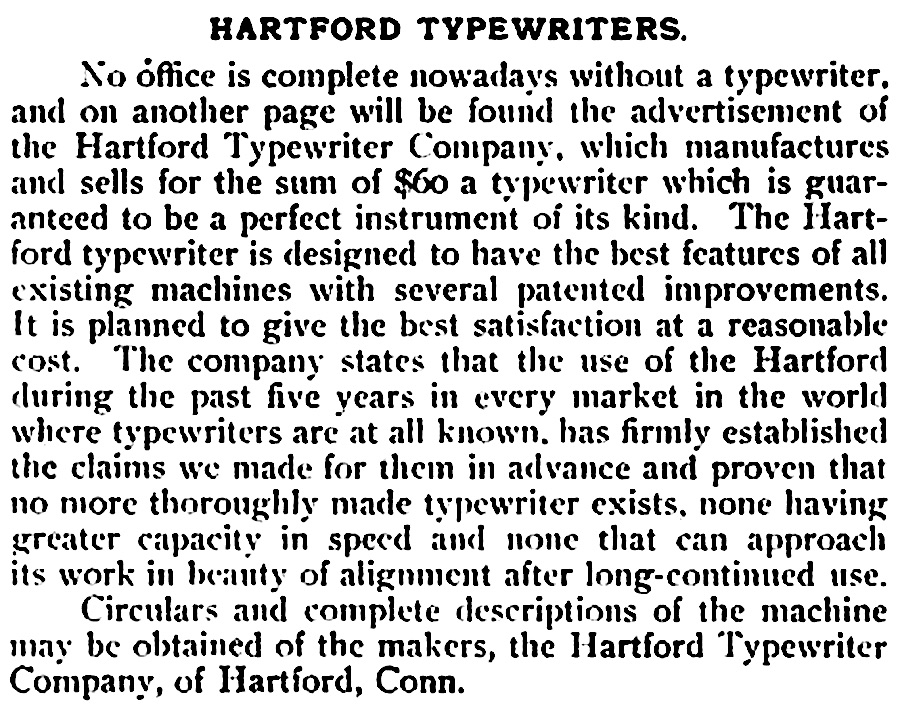 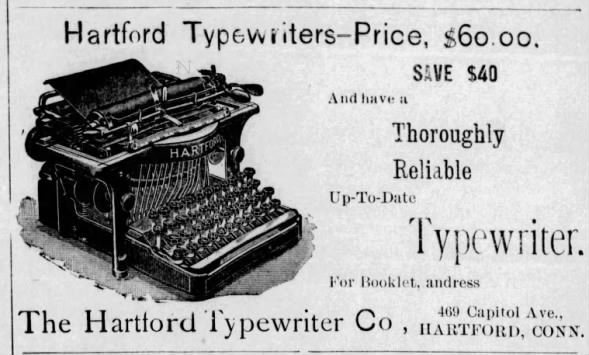 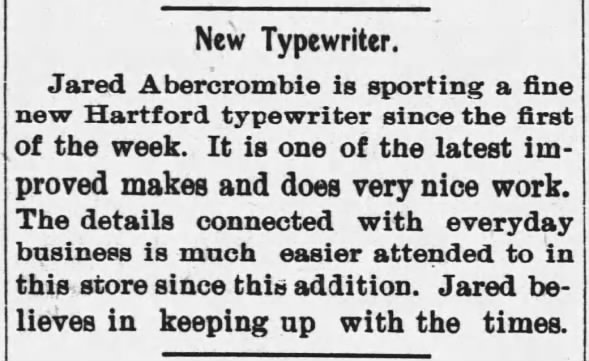 From Historical Sketch of the Police Service of Hartford, Thomas S. Weaver, 1901 — 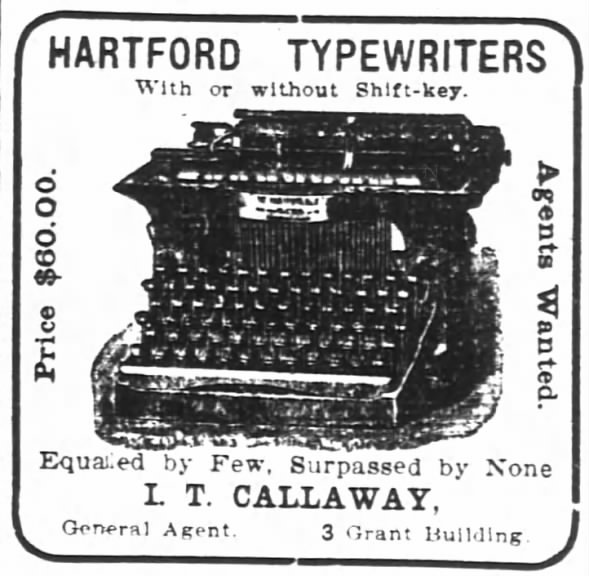 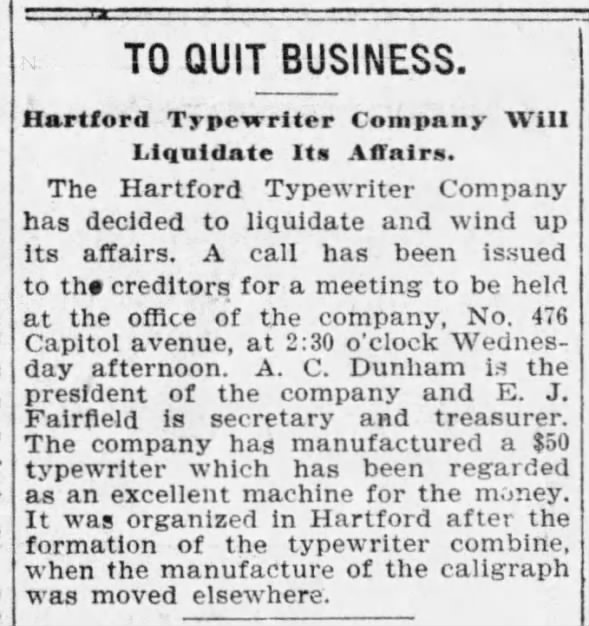 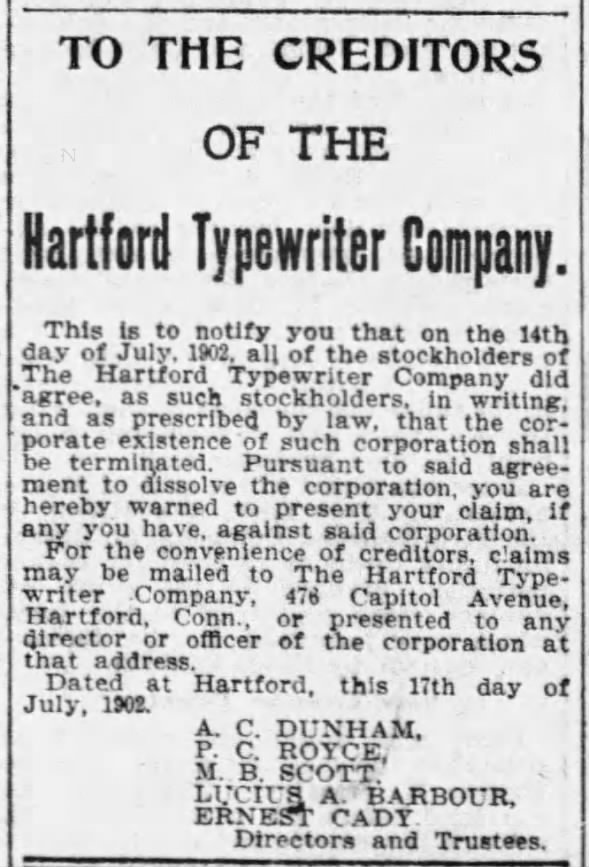 The remaining Hartfords continued to be sold. From The Indianopolis Journal, September 5, 1902 — 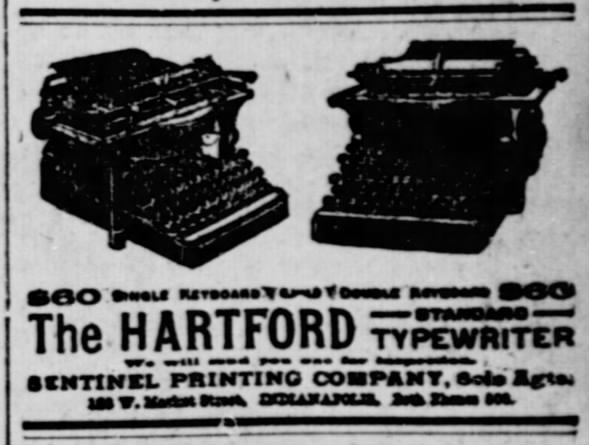 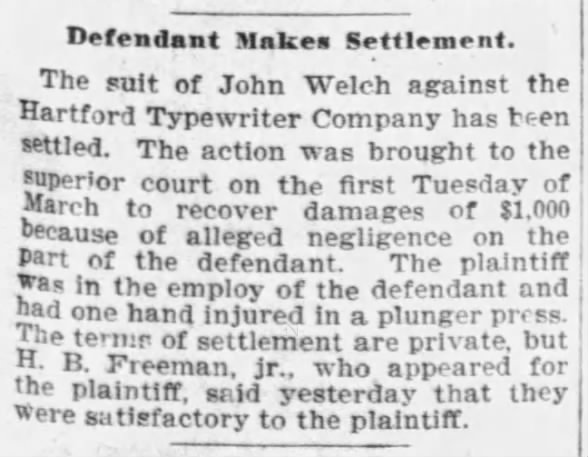