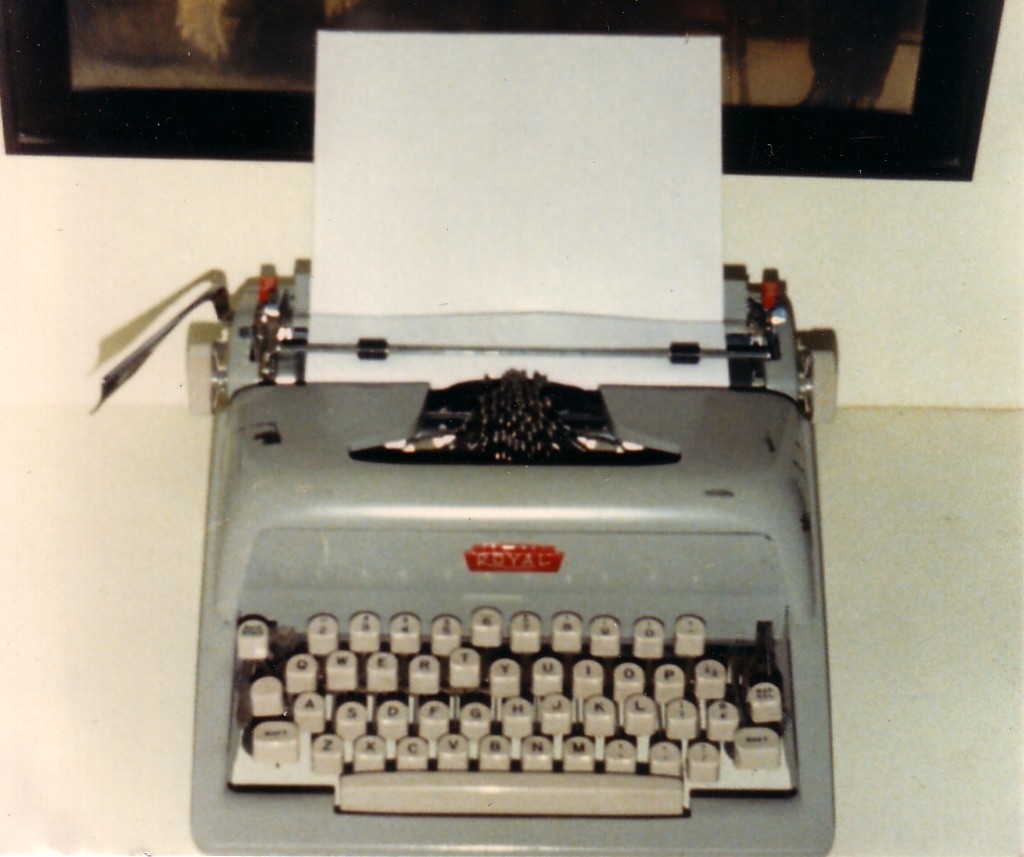 I never learned to type in high school, and that bothered me considerably because I wanted to be a writer. I was convinced that all writers typed. Why I believed this, I don’t know. Somehow an image of an author, hunched over his typewriter, forging his next novel, had impressed itself indelibly upon my mind, and I would not surrender the vision. Ultimately, however, it was the violin that kept me from enrolling in a typing class, for I simply did not have enough room in my schedule for both that and orchestra. In so many words, I chose one instrument over the other.

That didn’t mean I didn’t fiddle around on the typewriter. My mother owned a 1950s Royal manual, and I would “hunt and peck” whenever I got the chance. Eventually, I took possession it and established a small publishing house, though my printed work never exceeded one copy.

That was all back in the late 1980s, when computers were becoming more prevalent and the Internet was creeping into our lives. Even then, the manual typewriter seemed “retro.”

After graduating high school and just before going off to college, I enrolled in a business typing class through an adult education program in San Mateo, California. I told the instructor I was only interested in typing, not learning how to format a business letter.

“I intend to be a journalist,” I stated fixedly. And that was my intended profession, and I did become a journalist, but now I’m a teacher.

“I understand entirely,” she replied. “The first half of the program is learning to type. Once you attain a certain speed, you can withdraw. Only, I can’t award you a certificate.”

“It is not a certificate I want, only typing skills. I don’t want to hunt and peck for all my life.”

“Then, I shall only see you for a short while,” she answered. “You’ll learn quickly enough.”

At first, typing proved awkward. It wasn’t natural and was it easy. I worked on one row of keys, and then the next, typing words of mixed complexity, and made more mistakes than actual words. But I was not discouraged. Much the way a page of music seems mysterious until played, I knew my fingers would eventually find their way. And steadily I progressed.

I was learning on an IBM Seletric, a brand of electric typewriter that dominated the market for decades. At home I practiced on my mother’s manual typewriter. Now, all of this seemed ironic for I knew that within a few years computers would utterly dominate the market. Soon, machines worth several hundreds of dollars would be discarded in vast trash heaps (or else marketed on eBay). And here I was, learning to type on a Selectric! But I’m glad I did. I’m glad I got to experience the art of typing on a Selectric before entering the digital age. In a sense, you could say, I experienced a bit of the past before it was completely past.

Happily, I learned to type in a matter of weeks. When I reached 70 words per minute, my instructor came over and said, “I suppose I won’t be seeing you tomorrow.” Beaming, I replied, “No, but thank you very much. I will never forget this class.”

I don’t know if she expected me to become a famous writer or Pulitzer-winning journalist (I became neither), but I felt she knew I would accomplish something in life, and I appreciated her for that. It was only a typing class, but I felt I was learning one of most important skills of my life.