Some failed typewriters simply never existed, like the Stanograph. According to news reports in 1895, unsuspecting farmers invested around $10,000 in this machine and lost all of their capital. Like the Bennington, the Stanograph could allegedly type entire words (short, simple words such as “the,” “for,” “but,” etc.).

No substantial research has been offered regarding fraudulent typewriter companies, but stock manipulation was common around the turn of the century. In some instances, inflated reports would be issued about a company, and insiders would profit from well-timed selloffs once the stock rose. In most instances, though, companies just never realized their ambitions or else overestimated their product’s potential. In the case of the Stanograph, neither the machine nor the company existed.

From The Illustrated Phonographic World, August 1895 —

The same report was carried earlier in the Buffalo Evening News, June 25, 1895 — 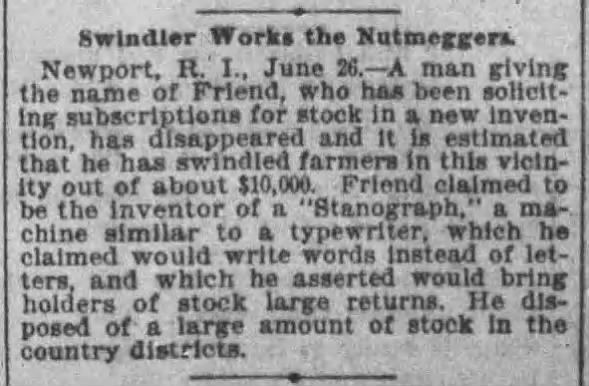 Typoscript, graphotype... anyone?
More on the House typewriter (no photo, though)
The Conde Typewriter
The Tachytypograph