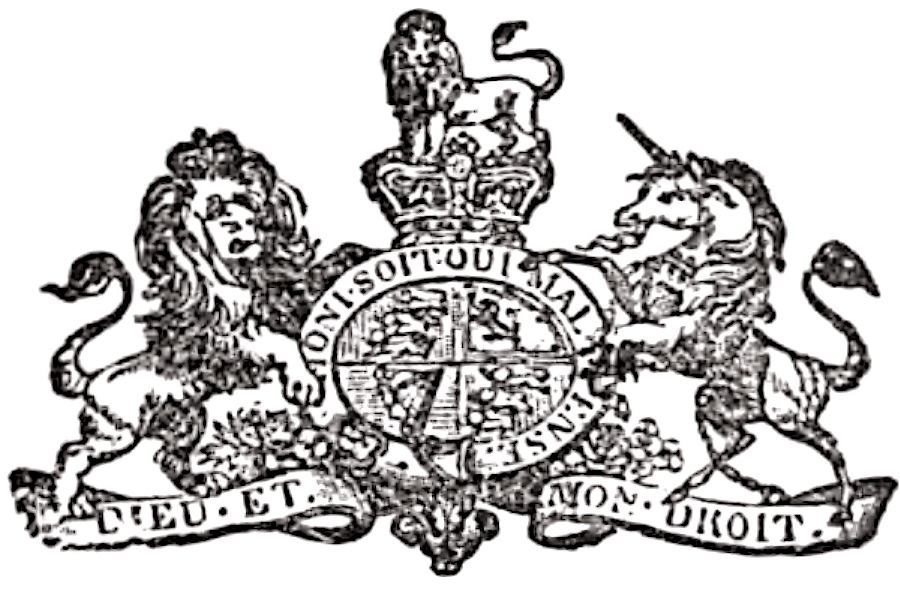 The history of the typewriter begins with an English patent for “Impressing Writing on Parchment” which was awarded to Henry Mill in 1714. The four-age patent (offered below) contains but one sentence describing “an artificial machine or method for the impressing or transcribing of letters singly or progressively one after another, as in writing, whereby all writings whatsoever may be engrossed in paper or parchment so neat and exact as not to be distinguished from print.”

The precise function or design of this machine is not known, but the patent does appear to describe the action of a mechanical writing machine. 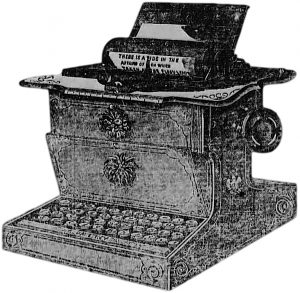 For historians seeking to define the origins of the typewriter, Mill’s patent excites considerable interest. The Sholes & Glidden Type Writer, originally conceived in 1866 and introduced in 1874, was not the first mechanical writing machine. Several other machines — the Burt, the Davies, etc. — preceded it, but none effected letters “singly or progressively, as in writing.” The Sholes & Glidden did. (Yes, the Hansen Writing Ball, exhibited in Copenhagen in 1873, achieved practical and commercial success, but not nearly to the level of the Sholes & Glidden.)

Henry Mill appears to have been the first to conceptualize a mechanical writing machine like a typewriter, and his place in typewriter history is thus warranted.

In 1895, The Illustrated Phonograph World sought a copy of Mill’s patent and any illustrations or model of the machine from Author Morton, an English typewriter historian. His reply and a facsimile of the patent (four pages of mostly legal jargon) are offered below. 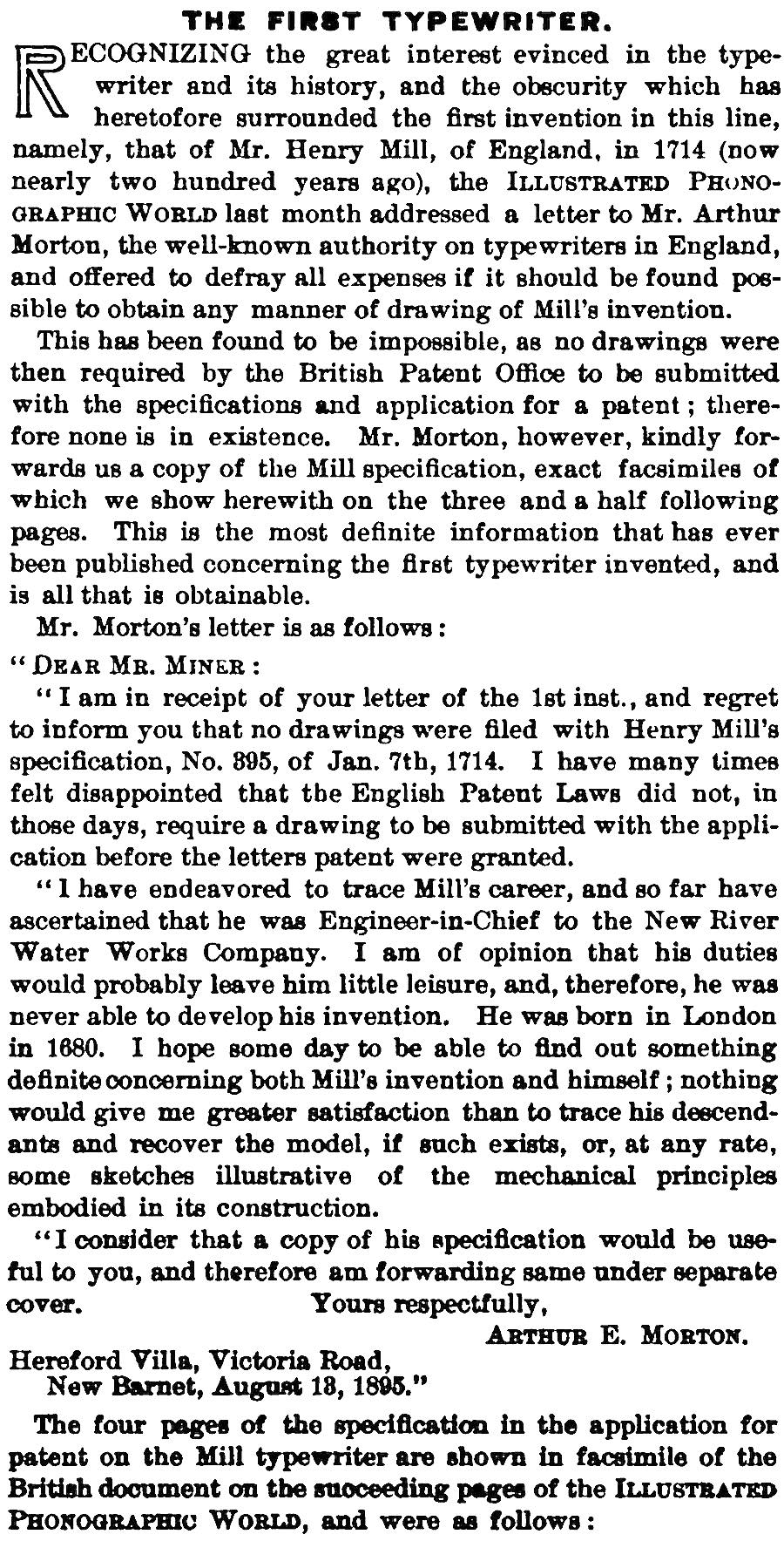 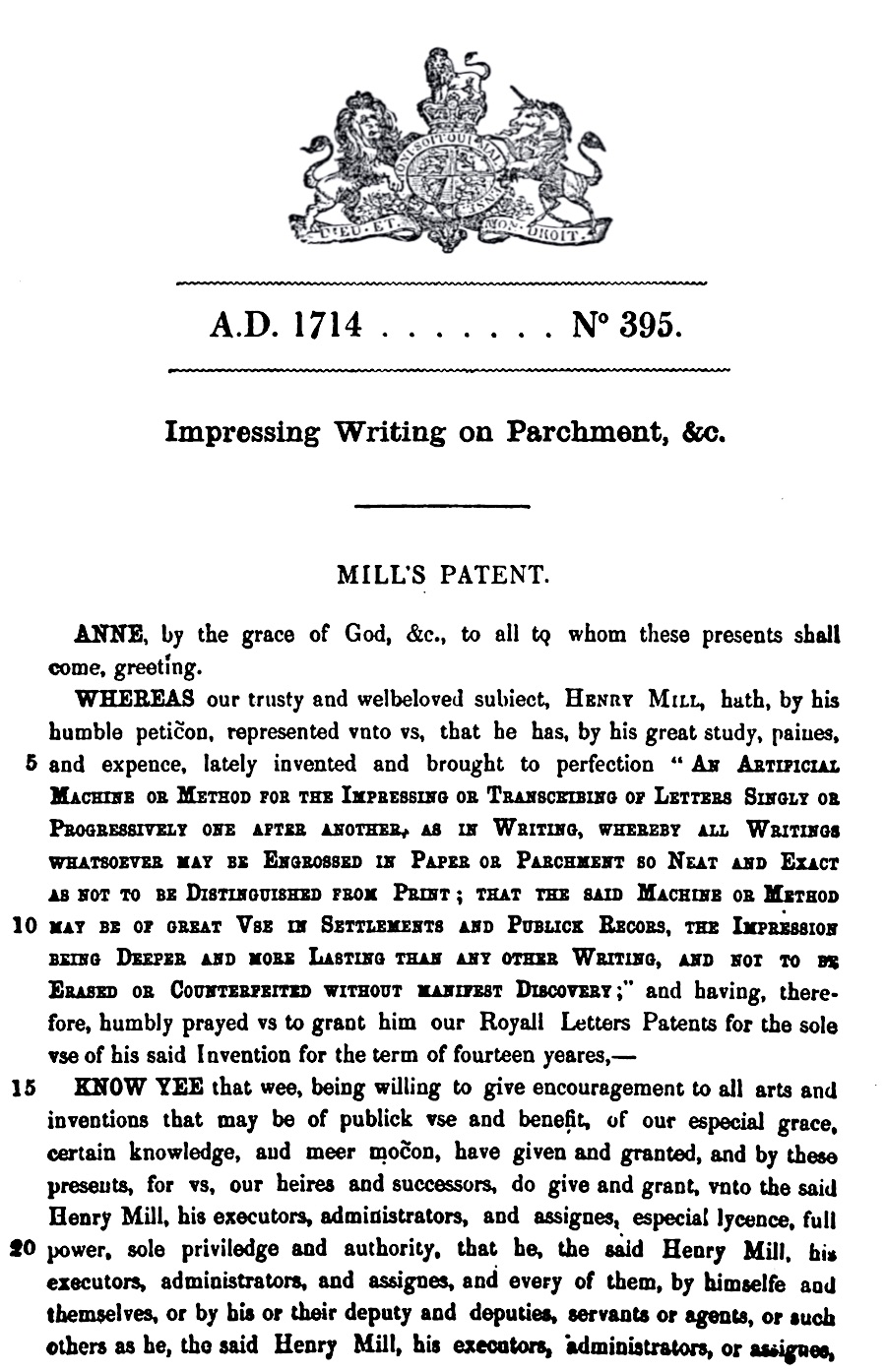 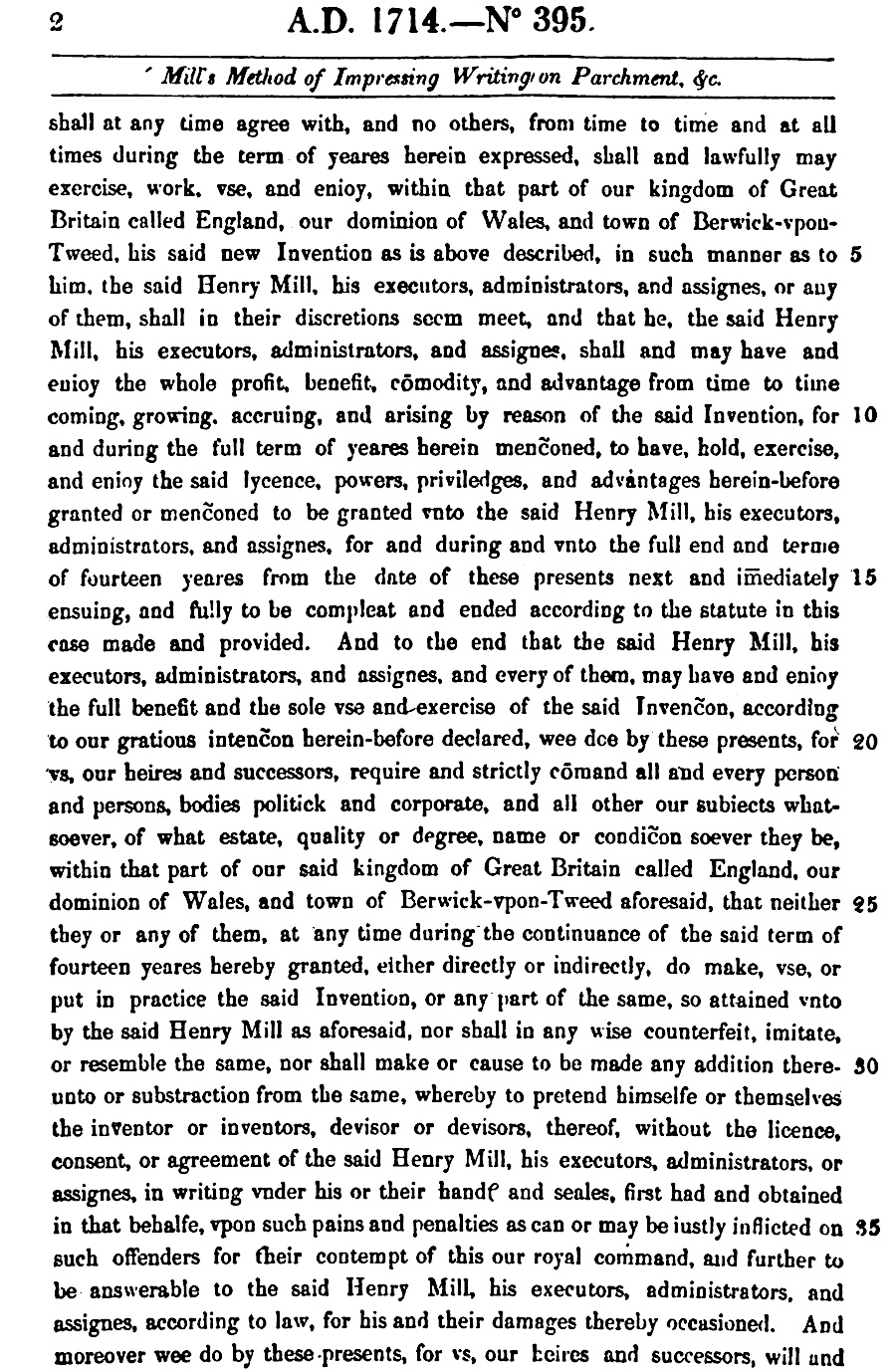 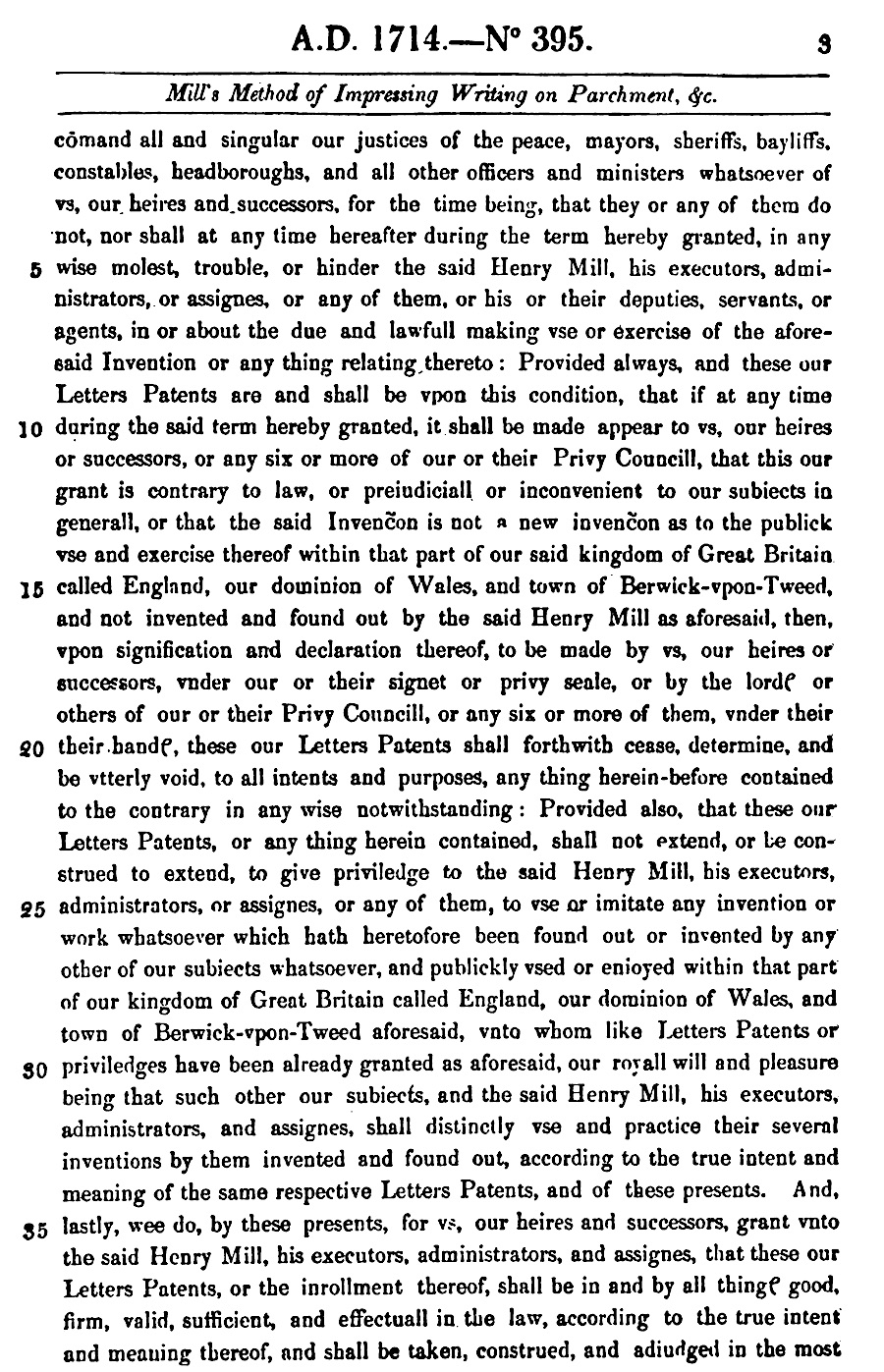 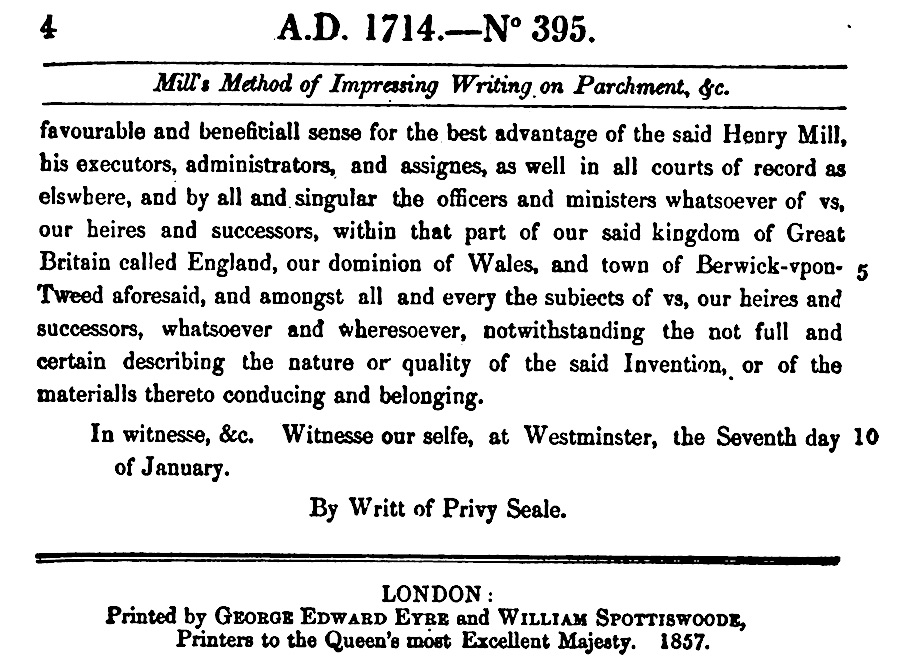 Here is the version as it appears in Reference Index of Patents of Invention, by Bennet Woodcroft, 1862: 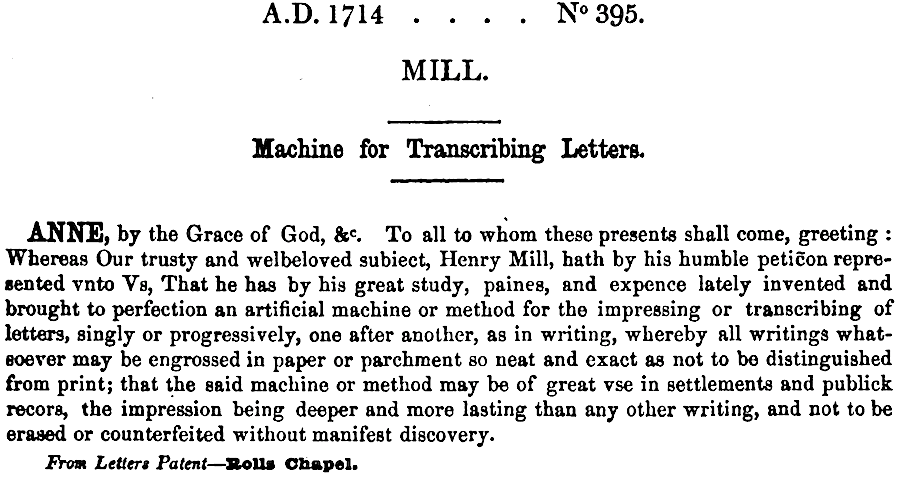 Typewriter historian Robert Messenger offers a more restrained view of the Mill’s patent, writing in Propagating Typewriter Myths: Grist for the Mill, “[T]o date the evolution of the typewriter from 1714 is, I would suggest, wishful British (and all typewriter lovers’) thinking.”

He asserts that the Sholes & Glidden “had no real precedents at all.”

My own view is that the Sholes & Glidden Type Writer was the first to realize the idea of a mechanical writing machine. (In essence, I agree with Messenger: the S&G “had no real precedents…”) Michael Adler, writing in The Writing Machine, a history of the typewriter, offered that the constituent parts of the Sholes & Glidden were incorporated variously in earlier writing machines, but no single machine achieved practical success. A person can write on a Sholes & Glidden, but not so much on prior machines.

I offer that the Henry Mill patent does mark the beginning of mechanical writing, at least theoretically. Until something more is known of Mill’s invention, only guarded assertions can be offered. That said, more than a hundred years of inquiry have yielded nothing more than a single sentence describing what might possibly be a type of typewriter.

The Sholes & Glidden was that machine.1