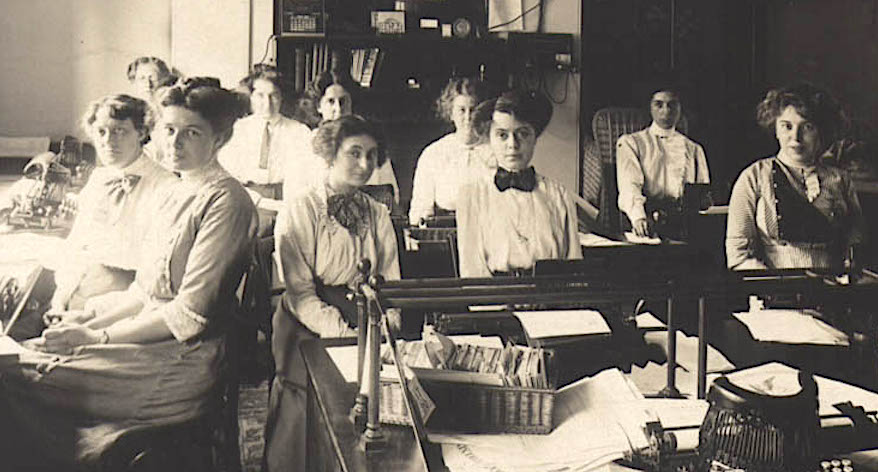 The question of equal pay arose as women joined the workforce in the late 1800s. In 1891, The Shorthand Review observed, “A fair typewriter will accept a salary of $8 to $12 a week, when a man with the same qualifications expects from $16 to $20.” Though the magazine championed equal pay, it struggled to find a progressive reply.

Indeed, in “Woman’s Labor Vs. Man’s” (offered below), the magazine would conclude that the onus was on women themselves:

“Women do not spend as much money as men, it does not cost them individually as much to live, and consequently less money will satisfy them.”

“It does not cost a woman half as much to live as it does a man and consequently she can afford to accept half as much salary for her work. But aside from this fact she is making a great mistake in lowering the price of labor.”

From the onset, patriarchal attitudes are apparent: a “typewriter”1 is, by definition, a woman (an object?), whereas a man is a person “with the same qualifications.” The woman is passive — “a fair typewriter will accept;” the man is active — he “expects.”

At times, the author of the article (one assumes a man) seems primarily concerned with the effect of women’s employment upon men’s salaries, that increased employment of women would decrease wages for all. The author even moralizes, “It is well for woman to work, but she should consider the future as well as the present need, and know that it is as much to her interest to keep up the wage scale as it is to the man whose place she is taking.”

In the September-October, 1891, issue of the publication, an article entitled, “A Proposed National Stenographer’s Association,” included the following: “The introduction of so much cheap labor, girls and incompetents, is placing the entire fraternity in a desperate condition, and a desperate remedy must be administered” (emphasis mine).

Indeed, lower pay for women did impact salaries for men, but the “us vs them” attitude of the article, already expressed in the title, was the ultimate culprit. The composite well-being of the whole — a diverse being of gender, ethnicity, and age — was always the real concern and the real business of business. Our society would have progressed further with a singular “us” attitude… and still can.

From The Shorthand Review, April 1891:

Men snickered when they heard of 'a woman typewriter'
Miss Remington's war on women wasting time
Working for half the wages of a man
1886: Paradise modified