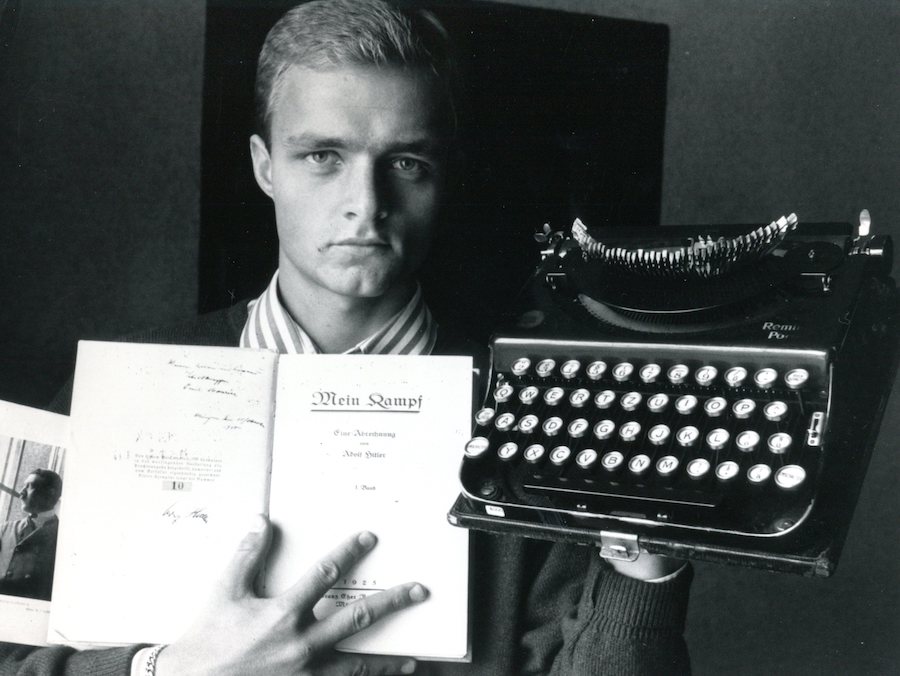 Description on back of photo: “Hitler’s Typewriter: Under the hammer; late 1987 saw the auction at Munich of items connected with, and belonging to, Adolf Hitler. This Remington Portable typewriter is the machine on which Hitler typed the bulk of his work Mein Kampf while in the fortress at Landsberg. Also displayed are, far left, a photograph of Hitler while at Landsberg, and (left) a signed dedication to one of the original copies of Mein Kampf. Camera Press (ERMA A9999) London. 36440-17 (88).” Note: Hitler more regularly dictated his words to Hess.

The world did not notice when Mein Kampf was published in 1925. National Socialism was yet an emerging movement and its leader was still a minor, though vocal, player. Spurred on by Rudolf Hess, a despairing Adolf Hilter outlined his ideas and intentions while imprisoned at Landsberg Fortress for the failed Putsch in Munich in 1923. Though critics found the book rambling and incoherent, Mein Kampf grew more significant as Hitler grew more consequential.

Yet the world did not notice.

Or, rather, it opted for a more positive view of Hitler, that he was a reasonable, rational figure, whose ambition could be tempered. William Shirer, author of the seminal Rise and Fall of the Third Reich, noted with amazement the world’s optimism in his diary while working as a correspondent in Germany in the 1930s:

“Much of what is going on and will go on could be learned by the outside world from Mein Kampf, the Bible and Koran together of the Third Reich. But–amazingly–there is no decent translation of it in English or French, and Hitler will not allow one to be made, which is understandable, for it would shock many in the West. How many visiting butter-and-egg men have I told that the Nazi goal is domination! They laughed. But Hitler frankly admits it. He says in Mein Kampf: ‘A state which in an age of racial pollution devotes itself to cultivation of its best racial elements must some day become master of the earth… We all sense that in a far future mankind may face problems which can be surmounted only by a supreme Master Race supported by the means and resources of the entire globe.’

“When the visiting firemen from London, Paris, and New York come, Hitler babbles only of peace. Wasn’t he in the trenches of the last war? He knows what war is. Never will he condemn mankind to that. Peace? Read Mein Kampf, brothers. Read this: ‘Indeed, the pacifist-humane idea is perhaps quite good whenever the man of the highest standard has previously conquered and subjected the world to a degree that makes him the only master of the globe… Therefore first fight and then one may see what can be done… For oppressed countries will not be brought back into the bosom of a common Reich by means of fiery protests, but by a mighty sword… One must be quite clear about the fact that the recovery of the lost regions will not come about through solemn appeals to the dear Lord or through pious hopes in a League of Nations, but only by FORCE OF ARMS… We must take up an active policy and throw ourselves into a final and decisive fight with France…'” – Berlin, September 27, 1937 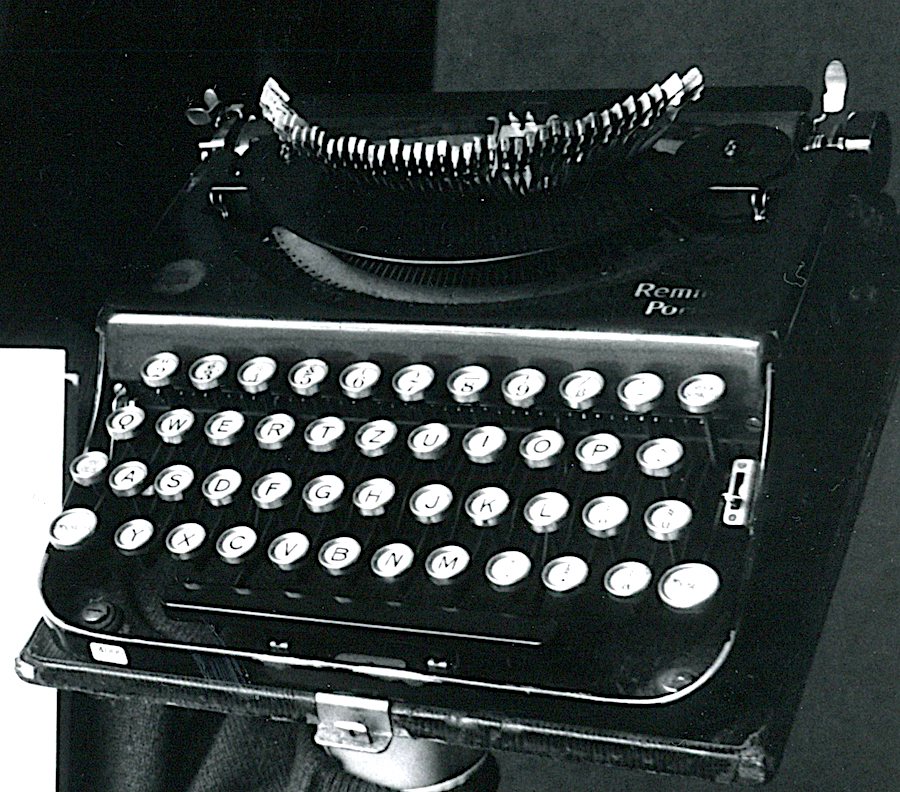 A Remington Portable Typewriter [No. 1] with German keyboard (QWERTZ).

The Landsberg machine was a Remington Portable Typewriter [No. 1] with a German keyboard (QWERTZ) and special German characters. This model was sold from 1920 through 1924. Another “Hitler’s typewriter” is a German-Groma, which was found by the Allies after the capture of the Eagle’s Nest in 1945. That machine is on display in American (see link).

The Dayton Portable Typewriter
Gatsby and the Remington portable
A very early Remington Portable, ser. no. NA00259
666: "The Beast"

Next post: Not useful until its character had been blackened