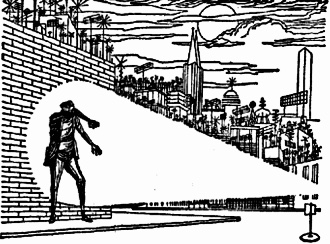 “Sudden gray phantoms seemed to manifest upon inner room walls where a curtain was still undrawn against the night, or there were whisperings and murmurs where a window in a tomblike building was still open.”

A city is silent when its occupants are sequestered, souls staring at televisions blazing in blue tones. In Ray Bradbury’s 1951 tale “The Pedestrian” only one man wanders the streets, a man “alone in this world of A.D. 2053.”

The story Bradbury tells strikingly observes that technology causes us to draw into ourselves into isolation from friends and family and the outside world.

The protagonist of the story is a creator of things — he is, by admission, an author, though the authorities regard him as “unemployed.” The rest of humanity are consumers — consumers of television (or future media) and consumers of goods and services, heaping up material possessions until the outside world is entirely subdued.

Bradbury’s “The Pedestrian” may not be the best written story, but it is especially prescient. (The story, in in PDF form, can be found here.) The person who hazards into the corners of the city is regarded with suspicion, such activities are denigrated.

I recall once wandering the streets when I was stopped by a police officer for “suspicious” behavior. I was carrying a mag light (it was dark) and there had been some “reports” of car break-ins. The officer was kind enough, explained his purpose, and accepted my statement — “Just out for a walk.” What struck me as tragic was that such activities are automatically regarded with suspicion. No one thinks first: oh, he pondering, traversing this path deep in though. No one asks, “What are you thinking?” but “What are you doing?”

Turn off notifications!
In other words, you aren't necessary
An inventory
All the world in Ray Bradbury

Previous post: “Not in the habit of writeing letters”