The clickety-clack of a typewriter 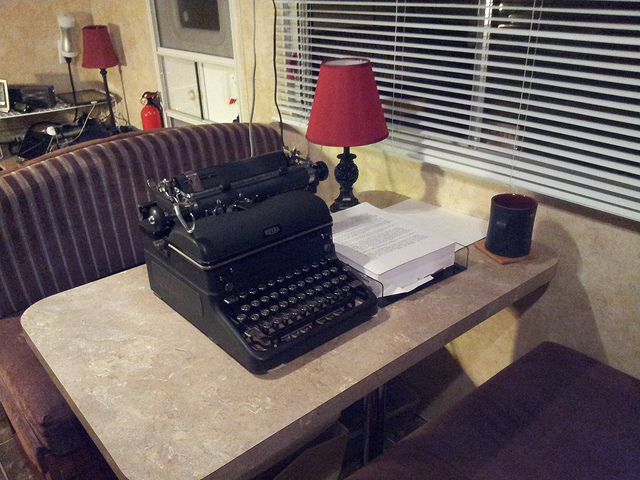 Having learned keyboarding on a typewriter, the transition from a Royal Futura 400 to a Macintosh Plus was unsettling. Immediately, I missed the clickety-clack of the typewriter, that distinctive “music” springing from the dance of nine fingers. I even installed a program on my computer to simulate the old typer. But that didn’t last long. The effect simply wasn’t the same. For one, I missed the swing of the typebars. For another, I missed the sudden “snap” of the keys striking the paper. The software-driven “clickety clack” that my Mac produced was frankly anemic. I quickly uninstalled the program.

I’ve read that when “silent” or “noiseless” typewriters were introduced, people sometimes struck the keys more forcefully to produce a louder key strike. Researchers soon discovered that people wanted the tactile response of the old manuals. Ultimately, future typewriters did operate more silently — my 1970s Royal Sprite is significantly softer than my 1941 Royal KMM (what a beast, what a wonderful beast) — but did at least retain the feel of a typewriter.

A more radical shift in typing, of course, is the touch screen, offering no tactile response (except that you are in vibrate mode). Ones finger continually meets an unyielding surface as one types ones thoughts. I don’t know that I’ve ever done any meaningful writing on a touch screen.

This draws me to another observation. When I switched from the Mac Plus to a Windows-based machine, I experienced yet another uncomfortable shift in the typing experience. I missed the “klunkety-klunk” of the old Apple keyboard. If you ever owned a Mac Plus, or typed on one, you know what I’m talking about. That keyboard made a bold sound, and it was not so nearly flat as a typical keyboard; it had greater spring action. This keyboard resonated.

But how important is the tactile response of a keyboard? How essential is the clickety-clack of a manual typer? I’m not entirely certain in my own mind. Consider that, before one learns to type, one writes everything — silently — by hand. So what does the tactile response of a typewriter really add to the experience of writing? I believe it adds something, but what is that something?

Top ten posts at Type-Writer.org
Interview with Bar-Lock representative (1895)
Henry Mill's patent for "Impressing Writing on Parchment"
The typewriter is not dead; our brains might be, though

Previous post: What does it mean to join the typosphere?