Blickensderfer’s last hurrah as a Remington 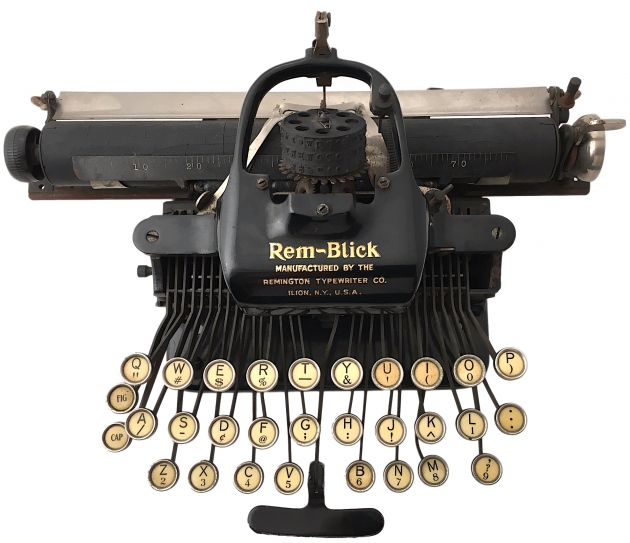 When Remington and other major manufacturers entered the portable typewriter market in the 1920s, the fortunes of smaller companies steadily declined. Corona, which had established itself as a market leader, thrived, but its sometime competitor, Blickensferfer, declined precipitously, ending its days as a secondary Remington product.

Introduced in 1893, the Blickensdefer was the first truly portable typewriter on the market, and with interchangeable type elements, it remained a top consumer choice from the 1890s through the 1910s. Blickensderfer faced insurmountable competition when in 1912 the Standard Typewriter Company introduced the Corona 3. That machine was so successful that the Standard Typewriter Company would adopt its brand as its corporate name. Blickensderfer, on the other hand, would see its name truncated as ownership of the company passed from one manufacturer to the next.

In 1919, the Roberts Typewriter Company purchased Blickensdefer and briefly manufactured the Blick 90. In 1926 or 1927, the tools and dies for the Blickensdefer were sold to Remington (many typewriter historians date the sale to 1926, but one news article dates the sale to 1927; see The Ithaca Journal, Ithaca, New York, June 24, 1927, here).

Why Remington, which had introduced a four-bank standard portable typewriter in 1920, would desire the Blickensderfer design is not entirely clear. Probably the company wanted to expand its product line, having only two designs, the Remington Portable Nos. 1 & 2, in its catalog. The newly minted Rem-Blick would be offered through Sears as a budget machine.

As Remington’s portable typewriter business grew, Remington often sought designs that would not compete with its primary machines. The Blickensderfer design also required less material, decreasing manufacturing costs, and Remington may have seen the Blick as a logical way to enter the budget market.

The price of the Rem-Blick did not hold steady through its short run in the Sears catalog. In the spring of 1929, it was offered at $24.95, but by the fall of that year, the price was two dollars less. In 1930, Sears reduced the price of the machine by a few more dollars and truncated the name to The Blick. That same year, Sears offered the Porto-Rite, another Remington machine that employed the design of the Remington Portable No. 2. Remington introduced the No. 3 in 1928, thus freeing the design of its predecessor for the budget market.

One suspects that as standard portable typewriters grew in popularity, the quirky Blickensdefer design simply could not endure. Its proprietary inking mechanism, a roller instead of a ribbon, likely dissuaded consumers. (How many collectors today have operational Blicks?) Richard Polt estimates that Remington manufactured perhaps 6,000 Blicks, a number that indicates modest success.1 However, it’s not entirely clear that the Rem-Blick performed as Remington had anticipated. 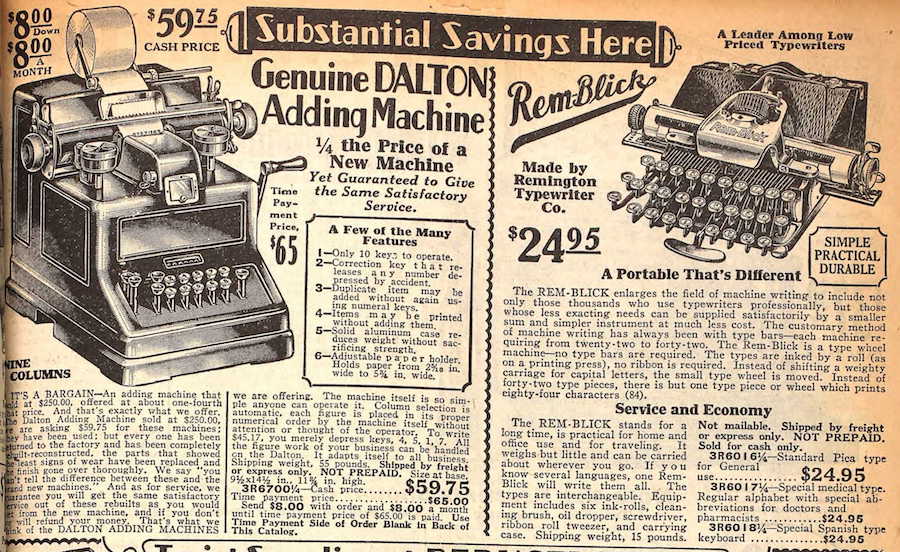 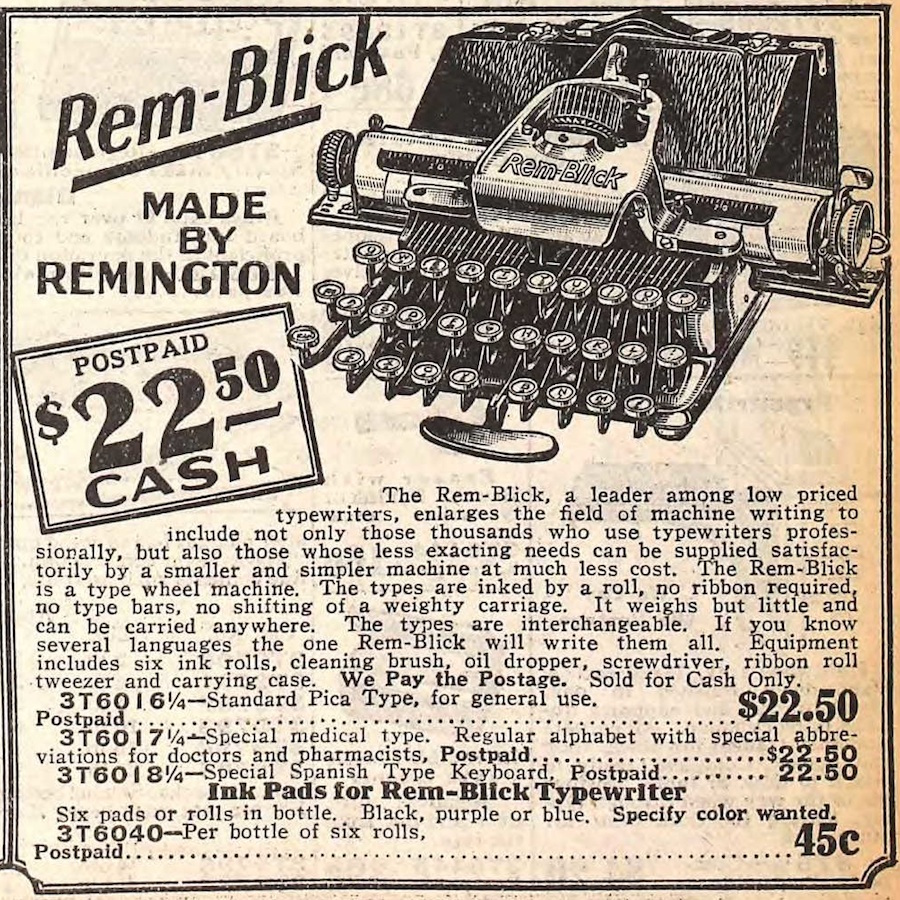 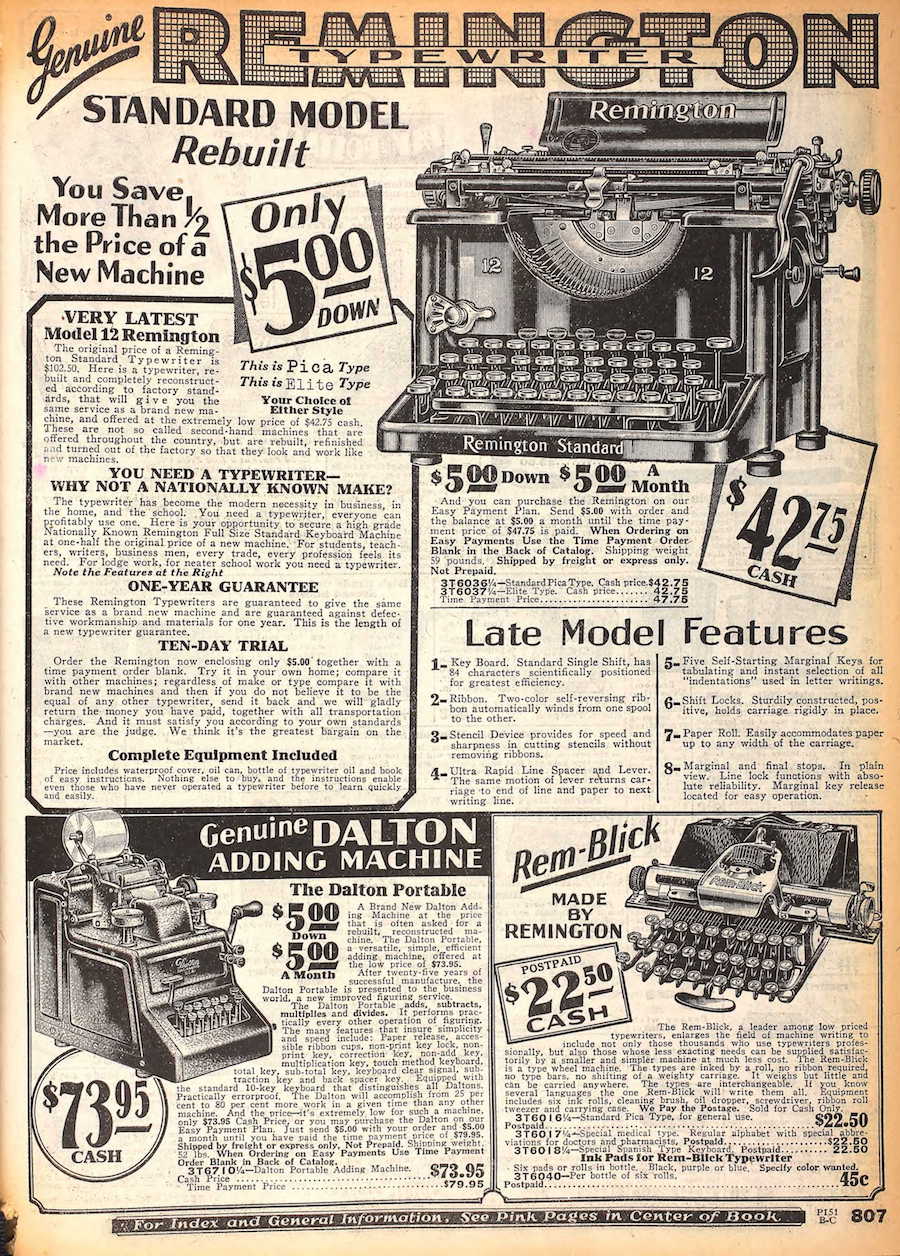 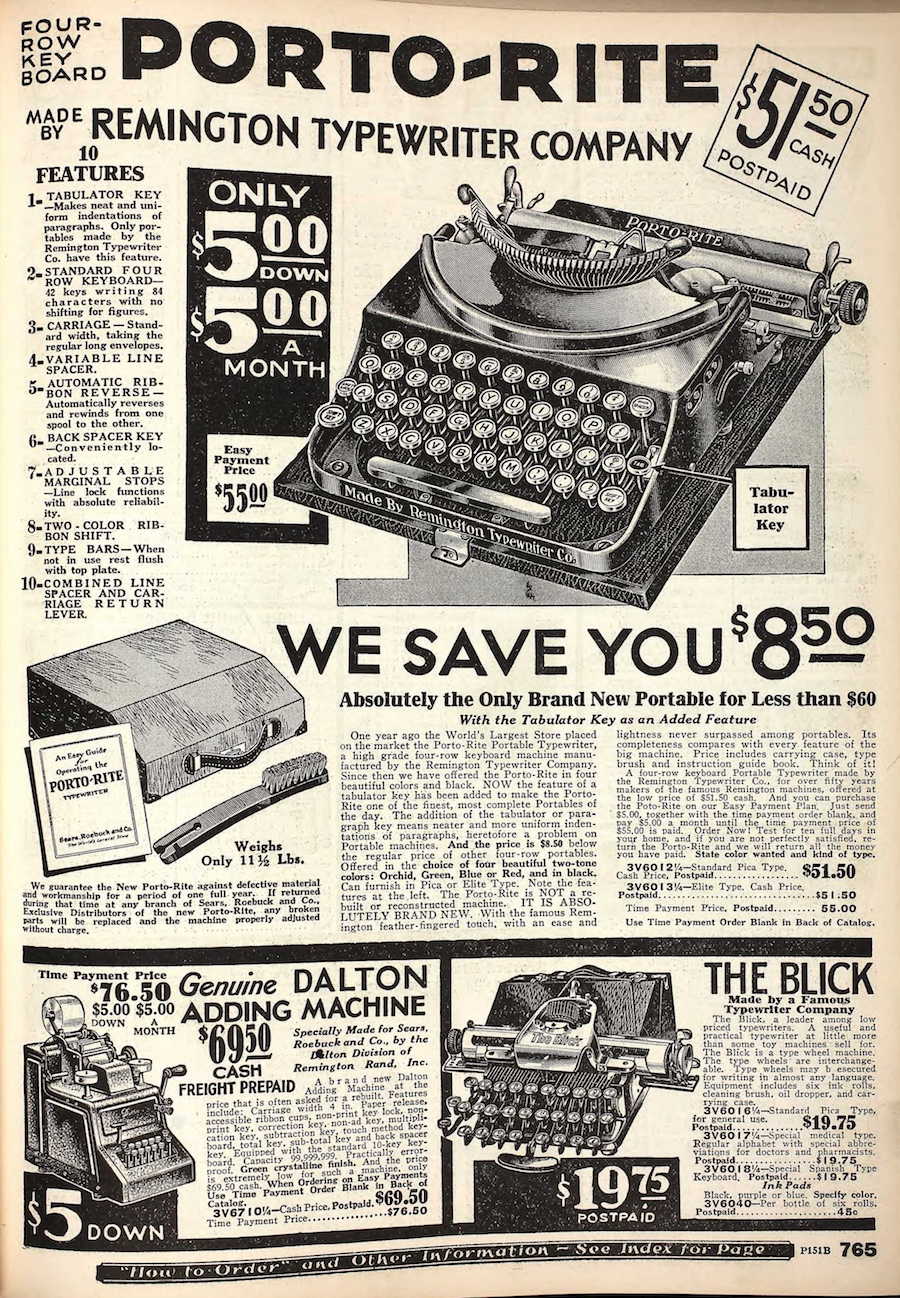 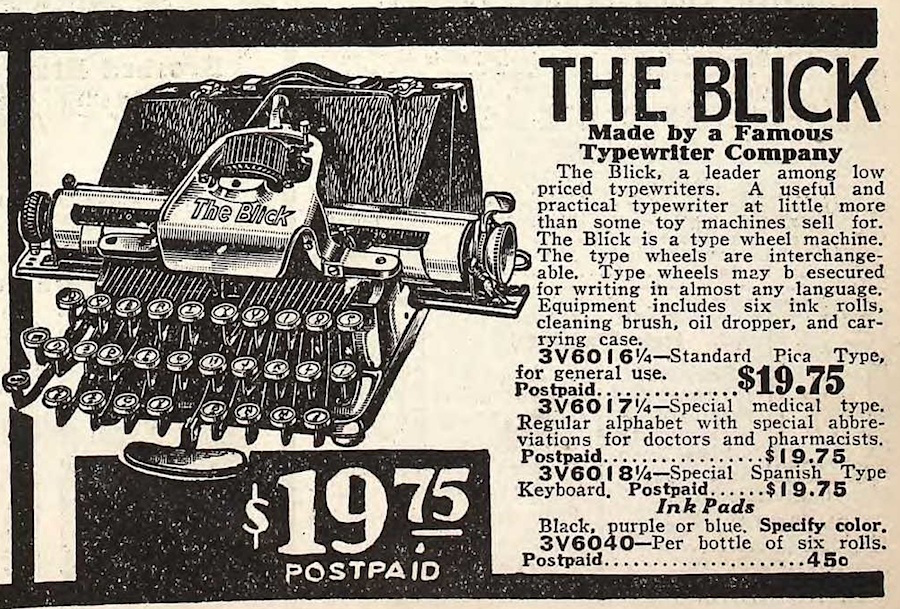 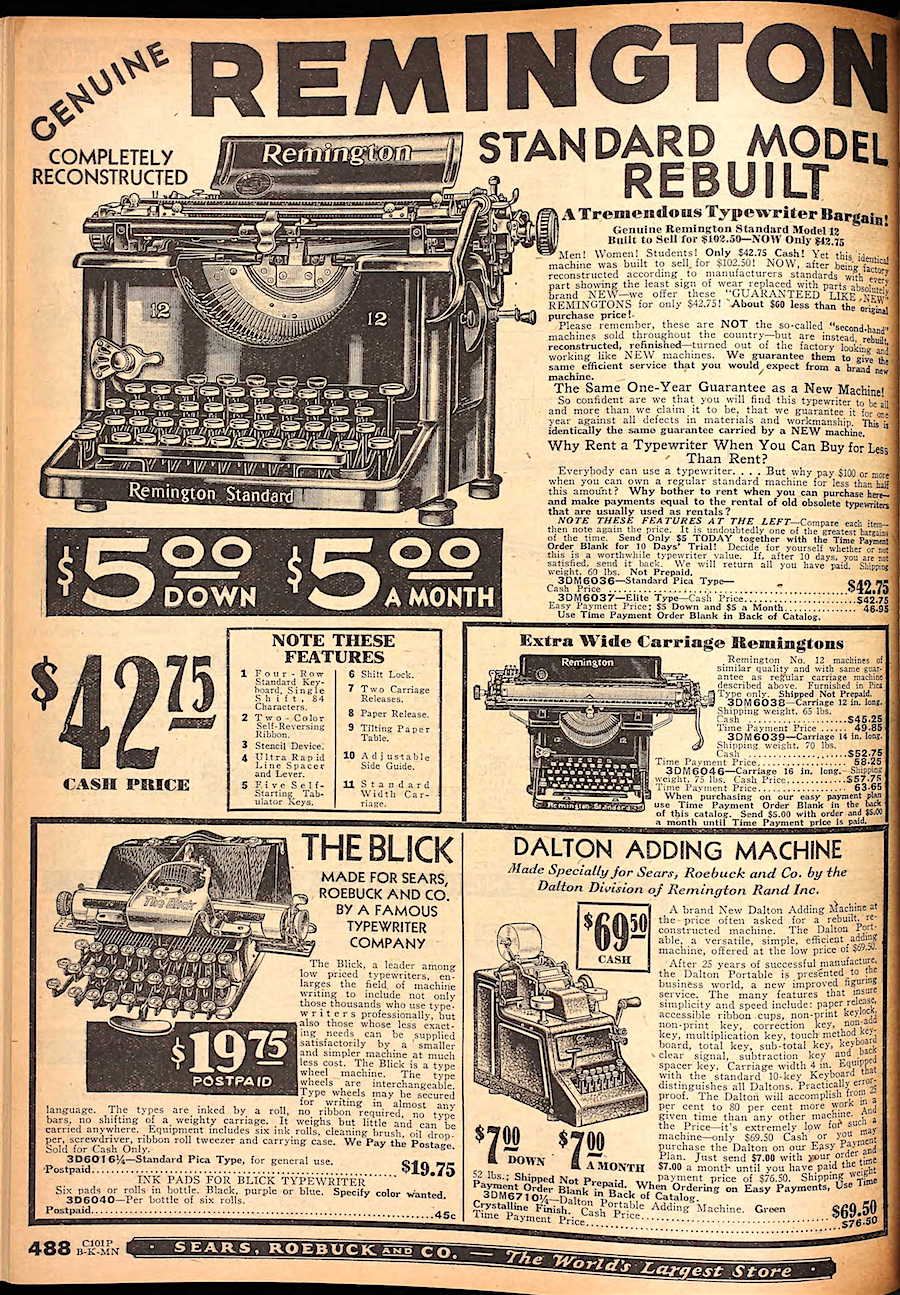 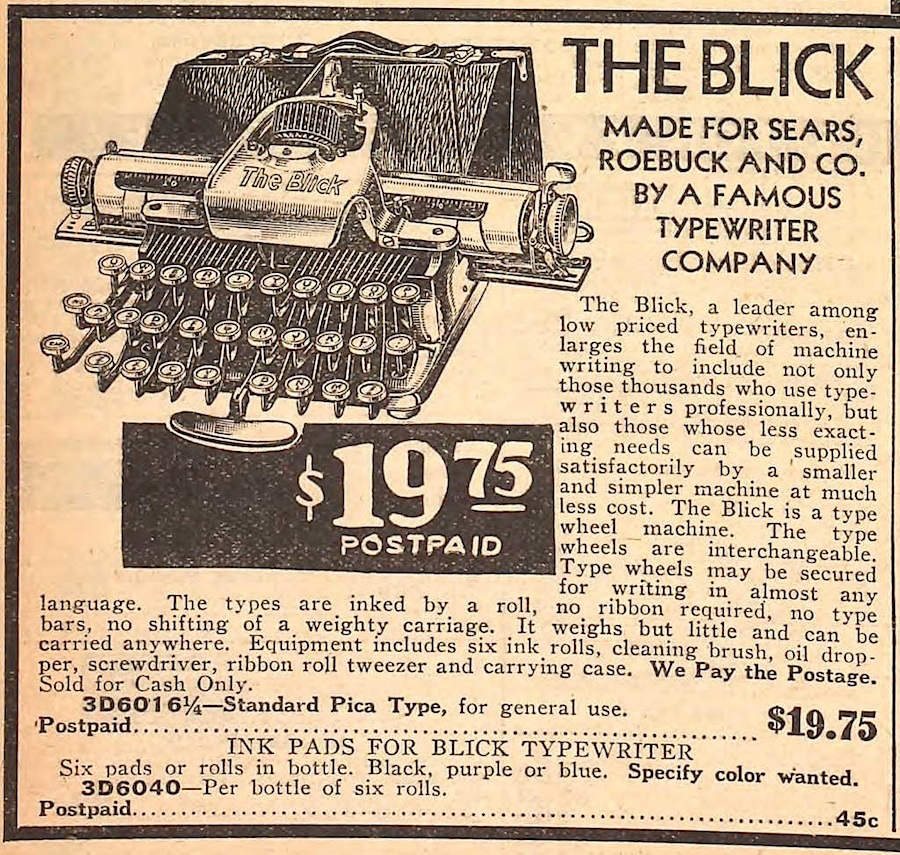 Finally, as a toy 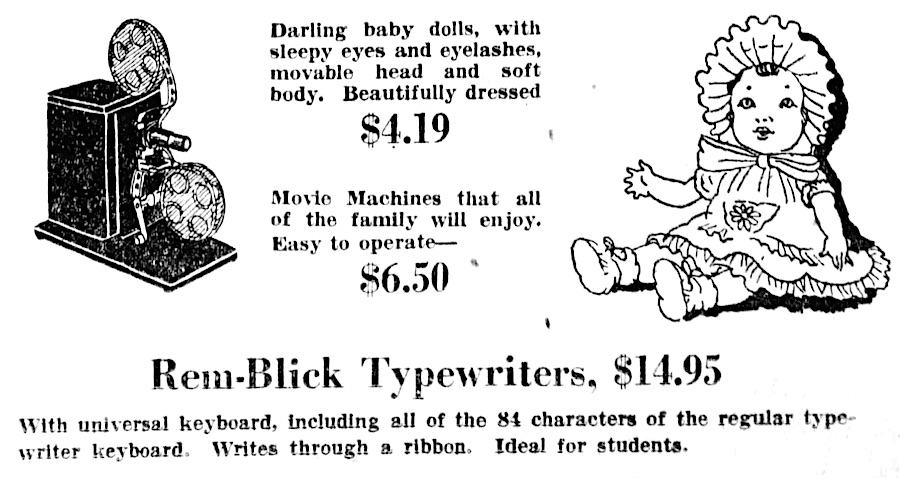 For all its uniqueness, the Blickensdefer was a real typewriter that swayed consumers when it was introduced in the 1890s. Throughout its evolution, the Blickensdefer sold reasonably well. But, in December 1930, sales were apparently so diminished for this design that it was sold as a toy typewriter by Marley & Carew Gift Bazaar in Cincinnati. It was offered for $14.95 and advertised as “ideal for students.”

It is interesting to note that this Rem-Blick “writes through a ribbon.” Another earlier version of the Blickensdefer called the Postal also employed a ribbon — see here at Polt’s page.

A supply of Rem-Blicks continued to be advertised at various retailers as late as 1934. See advertisements below. 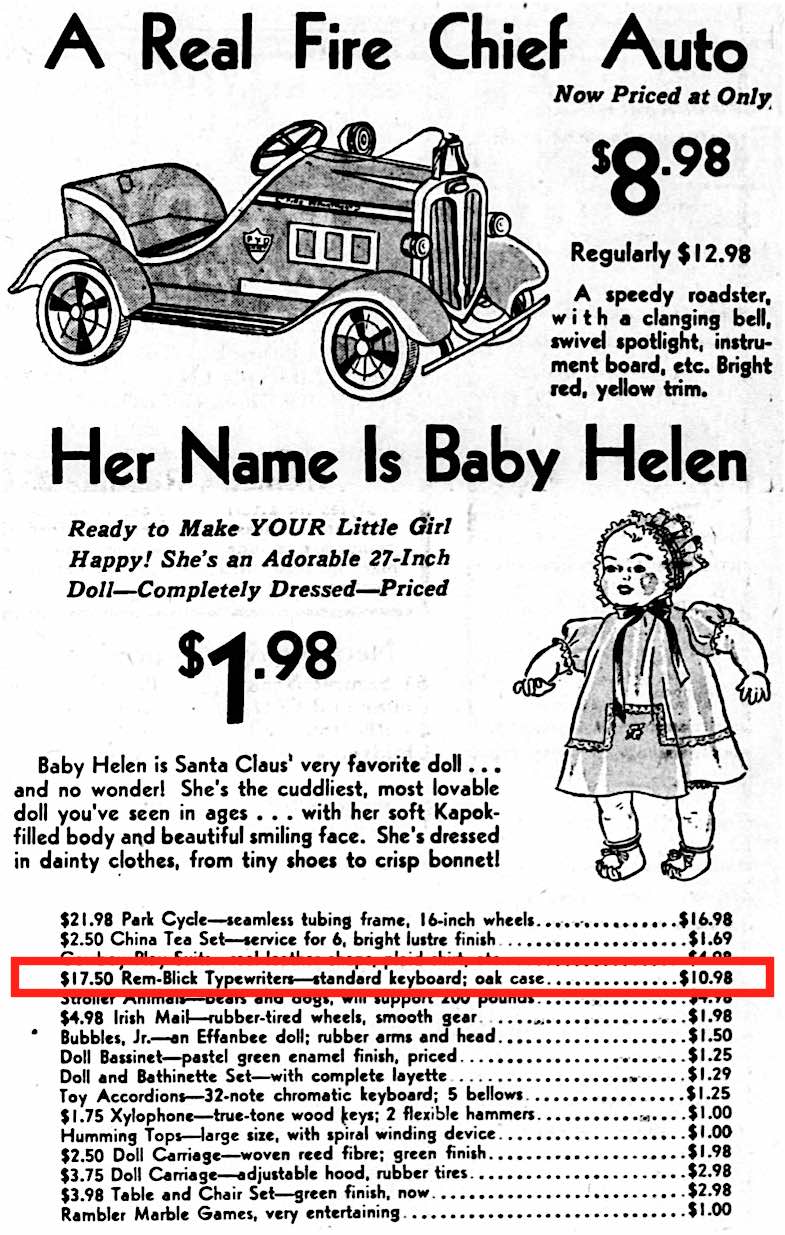 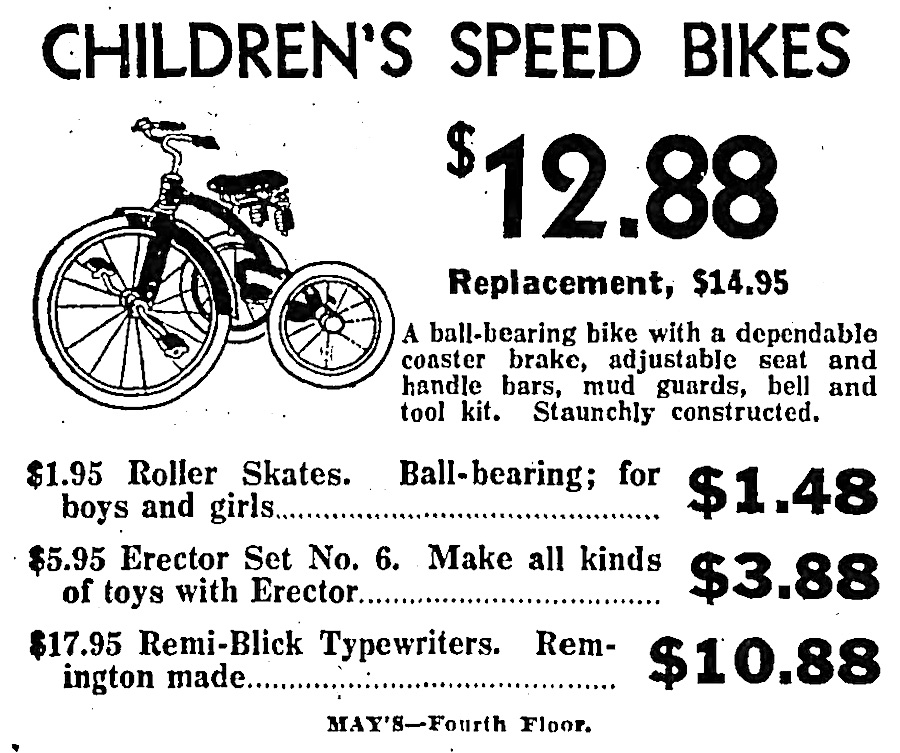 My machine is listed at TypewriterDatabase.com.

All I wanted was an electric train...
Selling the Quiet-Riter
Sergeant charges men to stop clacking!
Ephemera: Remington Notes, Vol. 2, No. 11 (1912)

Previous post: The (typewritten) Raven, composed by Daugherty on a Daugherty