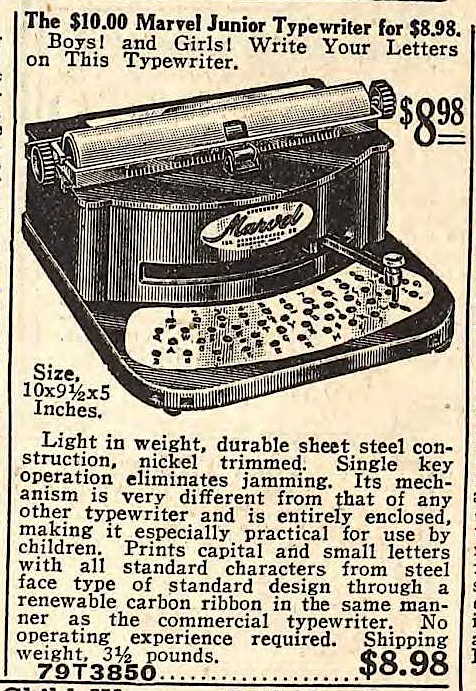 Searching various digital archives, I came across this item in a 1924 Sears catalog. I had never heard of the Marvel Junior Typewriter before, nor have I ever seen one, so my curiosity was piqued. The Marvel was patented by Carl W. Klauminzer in 1923, and sold (exclusively?) through Sears. Describing his invention in the patent application, Klauminzer wrote, “It is especially adapted for the use of children, but may also have peculiar advantages for persons with artificial hands or arms, as well as those of the blind who have difficulty handling multi-key machines.” 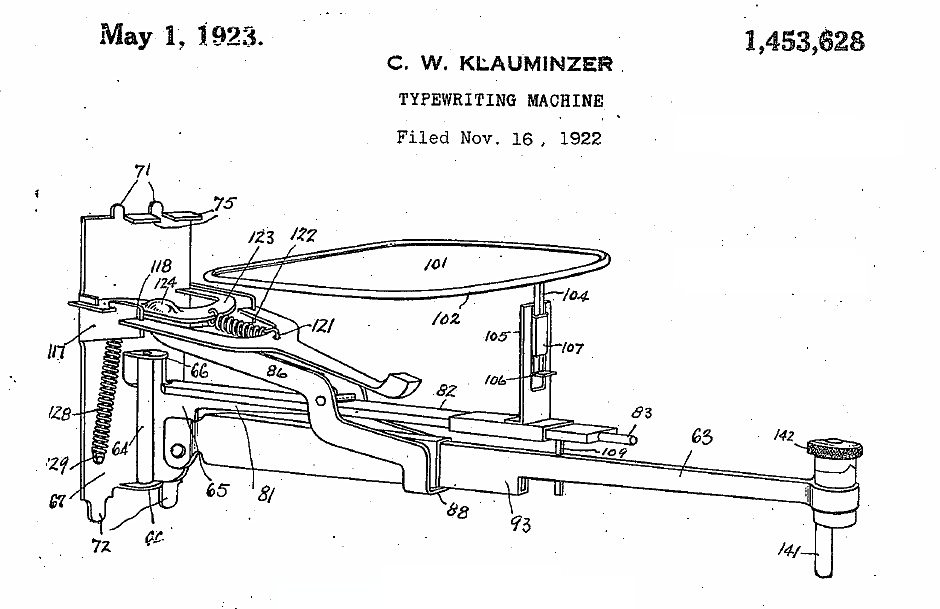 Klauminzer described his machine as having “but few parts,” a common claim in patent applications, and, indeed, it was comprised of few parts. How well did it function? Likely as well as any other index typewriter; in other words, modestly. Children must certainly have enjoyed it, though. One wonders what playful messages they must have typed upon it!

What can be known about the inventor is sparse. Klauminzer is listed in a 1923 Cleveland, Ohio, phone directory as president of the Marvel Typewriter Company, incorporated in 1923,1 and associated with the Employing Photo Engravers Association. Photo engraving seems to have been his primary occupation.2 A search of Ancestry.com indicates he lived his entire life in Cleveland, being born in 1878 and dying (relatively young) in 1936.

His name also appears in a 1913 edition of American Printer, as an attendee of a photo engravers convention in Indianapolis. Undoubtedly, he is one of the men in the photo below (click to enlarge) —

As for the brand Marvel, there are a few references unrelated to Klauminzer. A 1917 Saturday Evening Post story, entitled “England and Labor,” describes the Marvel as “an old-line machine, which had grown so hopelessly behind the times that it had not been manufactured for ten years.”

A curious fictional story, published in Chicago Tribune in 1907, associates Marvel with the “Melcher” typewriter:

“Did you ever hear of the Melcher typewriter? I thought not. Unless you happened to be in the typewriter business the chances are that you hadn’t. It isn’t a standard machine. It isn’t any kind of a machine now, but once upon a time it was a machine, a first class typewriting mating it was. In fact, it was one of the best typewriters ever made, up to date and a little beyond everything else in the matter of improvements, and it was well on the way to be established as one of the standard makes in the country.”

“[T]he Melcher machine ceased to be — as the Melcher — and the improvements which so distinguished it and make it noteworthy are today to be found on the Marvel. Which machine, as you know, is one of the big ones of the day and a competitor for the writing machine business with machines that were old before it and its new type bar system were thought of.”

I assume that both the Melcher and the Marvel are fictional.

Whatever the case, Klauminzer’s Marvel was real, and hopefully someone in the typosphere has one. If anyone locates this machine, please send an image to netadams (at) gmail.

The Pocket Typewriter
Charles Lincoln, I have your Simplex typewriter
Sears Easy Touch Typewriter
"Papa lets me write on his typewriter"