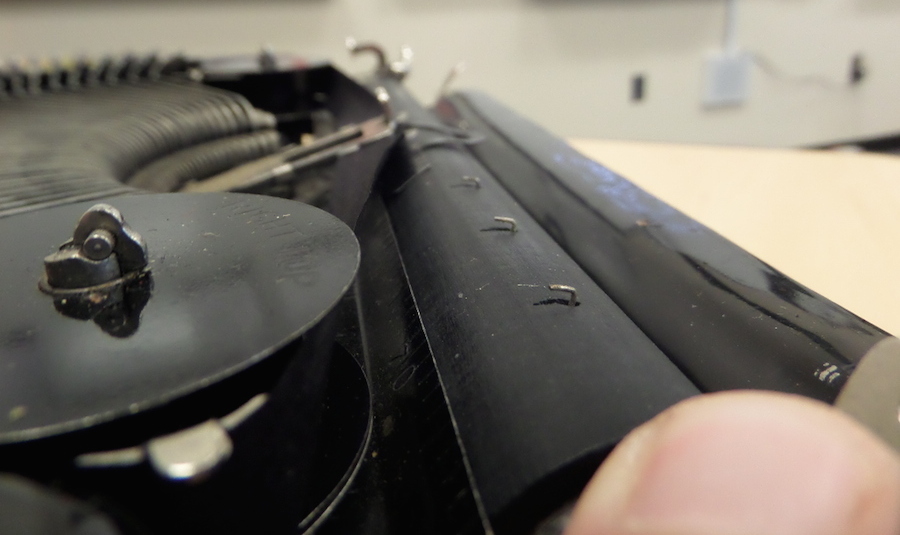 Many collectors have noticed a mysterious set of prongs, embedded in the platens of some Remington portables. These prongs can be extended by pressing a button on the right side of the machine.

Some time ago I acquired a Remington Portable (NK11382) and observed the same. What purpose these prongs served was not immediately apparent, but I surmised their function was to hold paper onto the platen — not exactly a brilliant surmise given the relative function of the platen. Still, what special purpose could they have served?

So I e-mailed Richard Polt, and he referenced several editions of ETCetera describing this feature.

Will Davis has found a mysterious device on his own Remington Portable #NV35224 (1923): there is a spring-loaded push button on the right end of the platen which activates three pop-up, hooklike prongs that protrude through the platen. The prongs point toward the typist, and when not popped up are flush with the platen. Will speculates that this device may be meant to indicate the end of the sheet of paper. I wonder whether it was intended to hold a special kind of paper or other typing surface onto the platen. Has anyone else seen such a thing?

He concluded, writing, “This is part of what makes our hobby fun: the seemingly never-ending stream of unique oddities.”

True! True! So please read on…

In a letter to the editor, issue 80, Ned Brooks noted:

I had never heard of the Remington “platen spikes” or whatever they are [see Editor’s Notes in our last issue], but when I looked through my six examples of the Remington side-lever portable, I found that NV75456 has the feature, though it is inoperable. The prongs are 13/16″ apart, and the rightmost one 3/4″ from the right end of the platen rubber. This machine has a Roman font with pharmacy symbols—could this have been an option for pharmacy work?

I found a Butler Brothers Remington (SN BB2875) at a flea market. It has a button on the end of the platen that releases three prongs that pop up out of the rubber. Presumably, they are to help hold index cards or some such.

Needless to say, I was a bit deflated. So no one knew the purpose of this device! But that was a clue itself: the prongs could not have been very practical, for no other machine employs them, and few Remingtons either. Still, not knowing bugged the heck out of me. 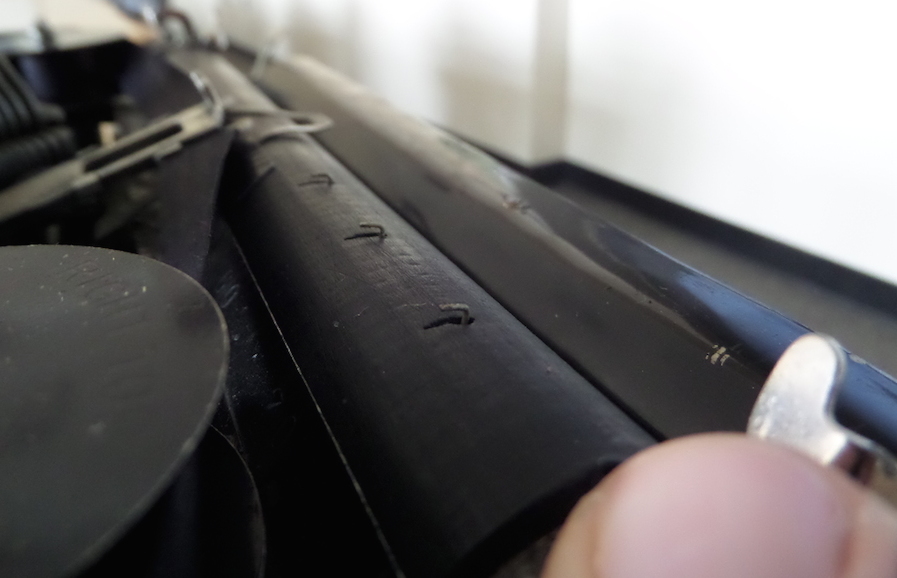 Now, we arrive at the present. For the past several months, I have been preparing an extensive piece on the Remington Portable [No. 1], and recently, I searched out patent applications for this machine. Thus engaged, it occurred to me that someone must have patented those mysterious prongs. That led to a new search.

The chief issue was that I did not know what the prongs were called. A search of “platen prongs” yielded interesting results, but all related to the printing press. I needed a different set of terms.

Knowing that these prongs were (1) found on Remingtons and (2) found on the platen and (3) found on machines dating to the 1920s, that set the search parameters. Then, I examined patents altering the platen.

Finally, I located G.A. Seib’s 1916 patent application (1,271,780) for “an improved device for holding small pieces of paper in position to be written on… [and] to allow of the machine being used for other purposes, such as the writing of bills and letters.”

The patent included the following images: 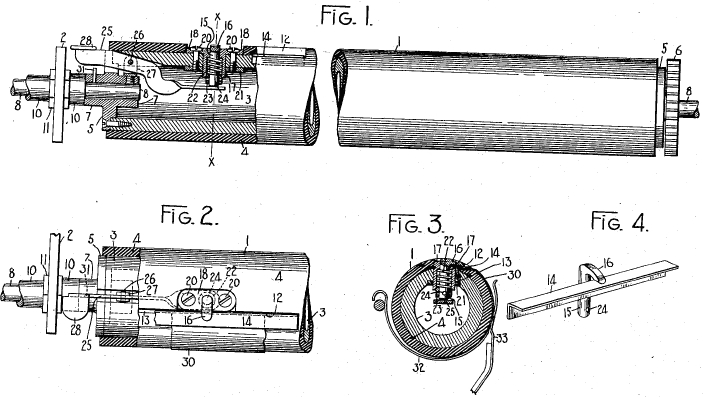 Describing his innovation, Seib wrote, “When it is desired to write a label … key 28 opens the gripper and the label can then be inserted under the horizontal flange of the bar 14 and if said label has a straight upper edge it can be alined or squared by pushing it back until said upper edge is arrested by … bar 14, which thus acts as an end gage to insure the proper insertion of the label.”

Evidently, Remington dispensed with the bar (14) but kept the prongs.

“On releasing the pressure on the key 28 the label is gripped by the action of the spring 22, after which the platen is turned in line space direction, thus drawing the label in between the platen and the paper apron 32 and drawing it up behind the plate 33. The label is thus held at both its bottom and top edges… The label can be written upon in the usual way and can be removed from the machine by turning the platen.”

As near as I can tell, this “device for holding small pieces of paper in position” is found only in Remington portables. (If other machines have it, please comment.) In any event, it unlikely proved useful or necessary. Certainly, people could have arranged small pieces of paper on the platen themselves. That said, the device has been sighted in machines dating from 1921 through 1933, a significant span of time.

One consequence of this feature was a shortening of the width of the platen, which was already narrow on the 1920s Remington Portable. Its application was likely limited to specialty machines, such as the one described by Ned Brooks (see above) and other machines intended for the office. 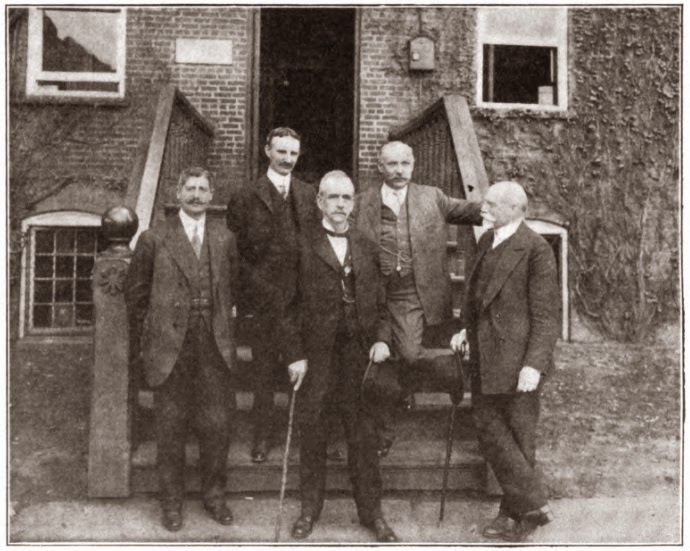 Photo gleaned from Robert Messenger’s blog, from a post on Seib’s contribution to Remington’s visible typewriter. Seib is in the back right. See post here.

Despite the meagerness of this innovation, George A. Seib was, in fact, a considerable figure in typewriter history, having played a important role in developing a “visible” typewriter for Remington. A comprehensive account of his life and work can be found at Robert Messenger’s blog at oz.Typewriter (see here). Messenger notes that most of Seib’s patents relate to “just a part of the typewriter.” Seib seemed mainly to make improvements.

I did locate some additional information: 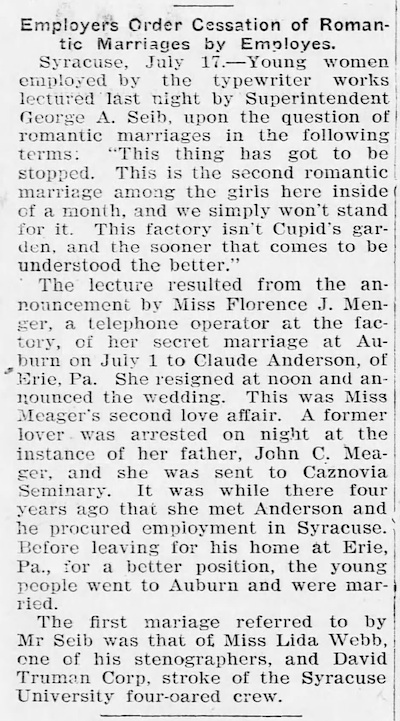 Monarch Visible No. 1 & Monarch Typewriter No. 3
A sportswriter's Monarch
A very early Remington Portable, ser. no. NA00259
The Monarch Noiseless 61