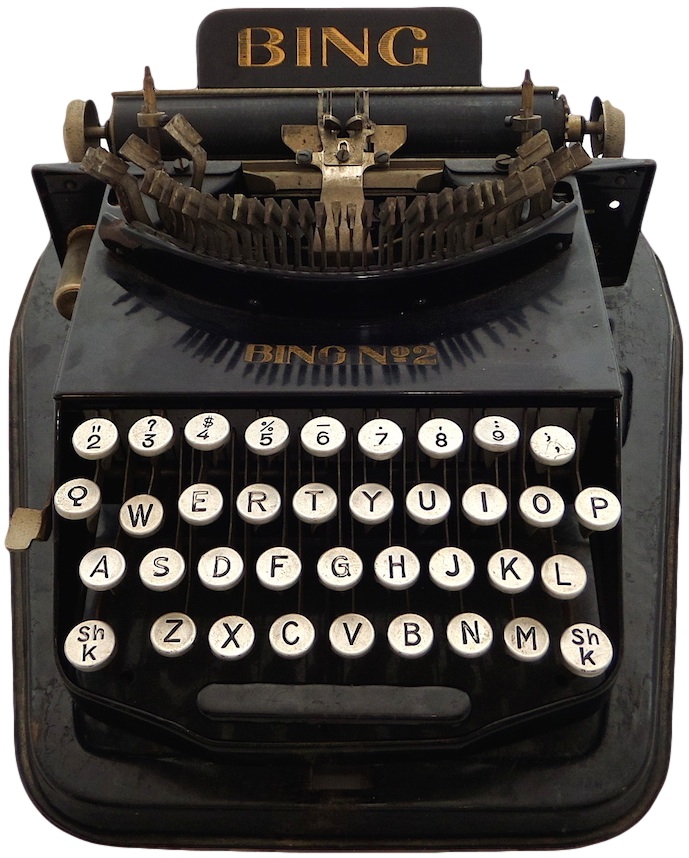 Bing Werke, a German concern, released two iterations of the Bing typewriter from about 1925 through 1929. Straddling the line between a toy and an adult machine, it was advertised as a “lehrmittelschreibmaschine” or educational tool. No record exists of production volume, but, based on the frequency of Internet listings, the Bing was manufactured in vast quantities. Though intended principally for the North American market, German versions do exist.1

The Bing No. 1, simply called Bing, was introduced in 1925 and sold for $11.95.2 Copy from one advertisement reads, “Built like a real one. Children learn to spell correctly and compose letters. The best educational toy” (see image below). It appears the No. 1 was offered in black only.3 It employed an ink pad system for type impressions.

English and German versions of this machine are extant.

A variant of the No. 1 employs a ribbon system, and is known to collectors as the 1B or 1 1/2. An example can be seen here at Chuck’s Antique Typewriter Website and Museum — note the wire paper table. Upon close inspection, however, one observes that the 1 1/2 more closely resembles the No. 2 (note the lever on the left side — this is lacking on the No. 1, but present on the No. 2). The 1B may simply be a No. 2 with older decals. 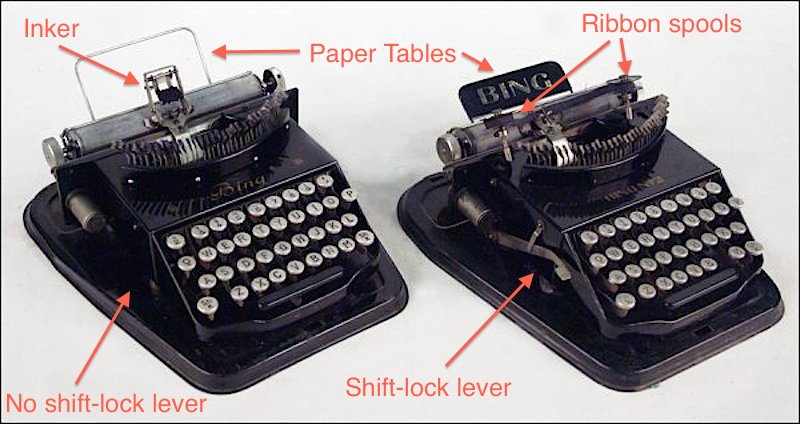 Side-by-side comparison of No. 1 and No. 2. Principal differences are the inking system and that the No. 1 lacks an external shift-lock lever. The 1B has the wire paper table, but also ribbon spools and external lever. Is the 1B more a 1 or a 2?

The Bing No. 2, offered in black or ivory, was introduced in 1927 and sold for around $39. The words “Bing,” “Student” or “Bing Student Type” appear on the paper table. This model employed a standard inking system and a shift-lock lever, positioned outside the housing (left side of the machine). The No. 2 included a manual apparently.

German No. 2s are extant: 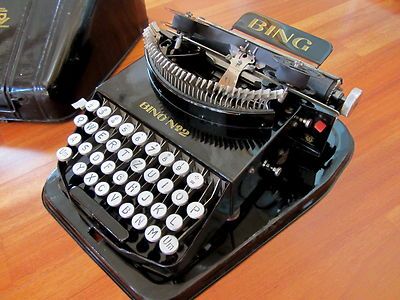 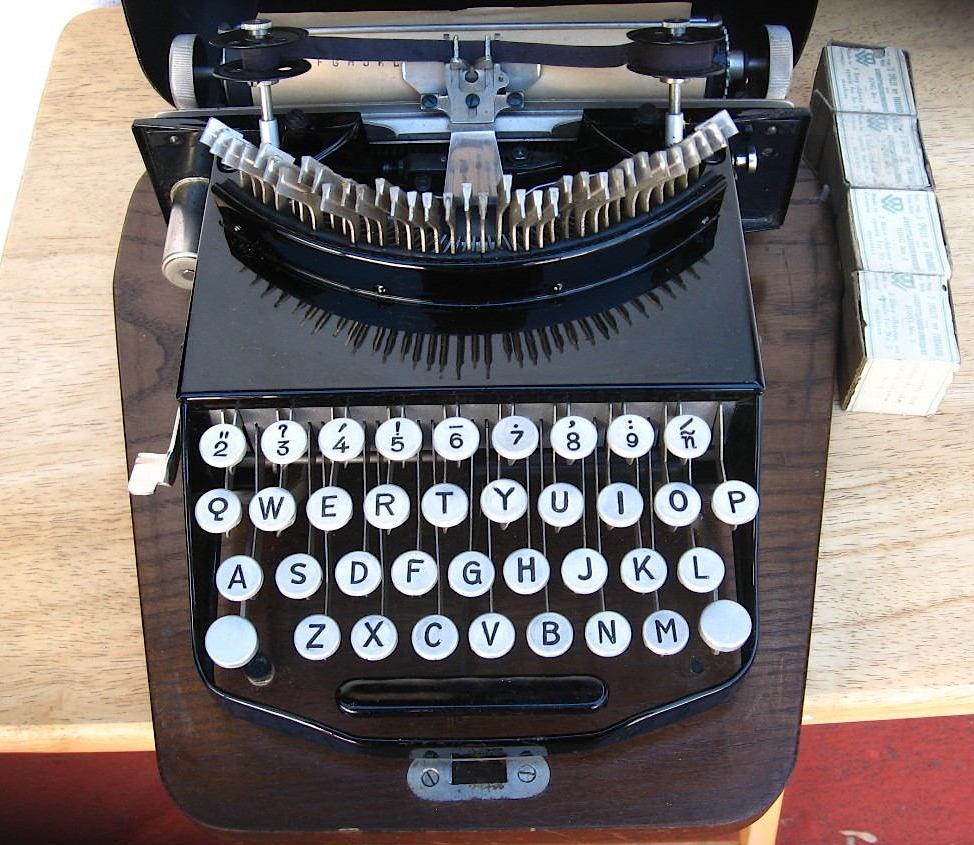 An unmarked Bing Student Type with wood base and aluminum keys (unlike its English counterpart). Cover is likewise unmarked (click here to view).

The keys on most are aluminum, but on the “Student” and “Bing Student Type,” the keys are glass tops with metal rings. A fuller description of this second type can be found at this German-language website here.4

More images of this machine here —

A few ivory Bings are unmarked on the exterior and interior.

As for name variants, TypewriterDatabase lists Amka, Beko,5 and Berni; the Chestnut Ridge Typewriter Museum lists two: Berni, which it describes as “very rare,” and Anfoe Student, which is white with metal rimmed keys. 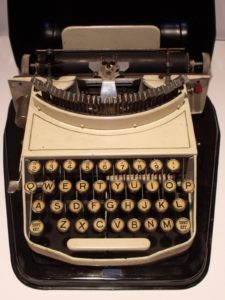 The Anfoe with QWERTY keyboard. 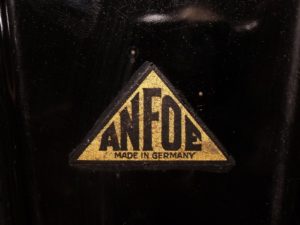 A Spanish version named Erika has also been sighted: 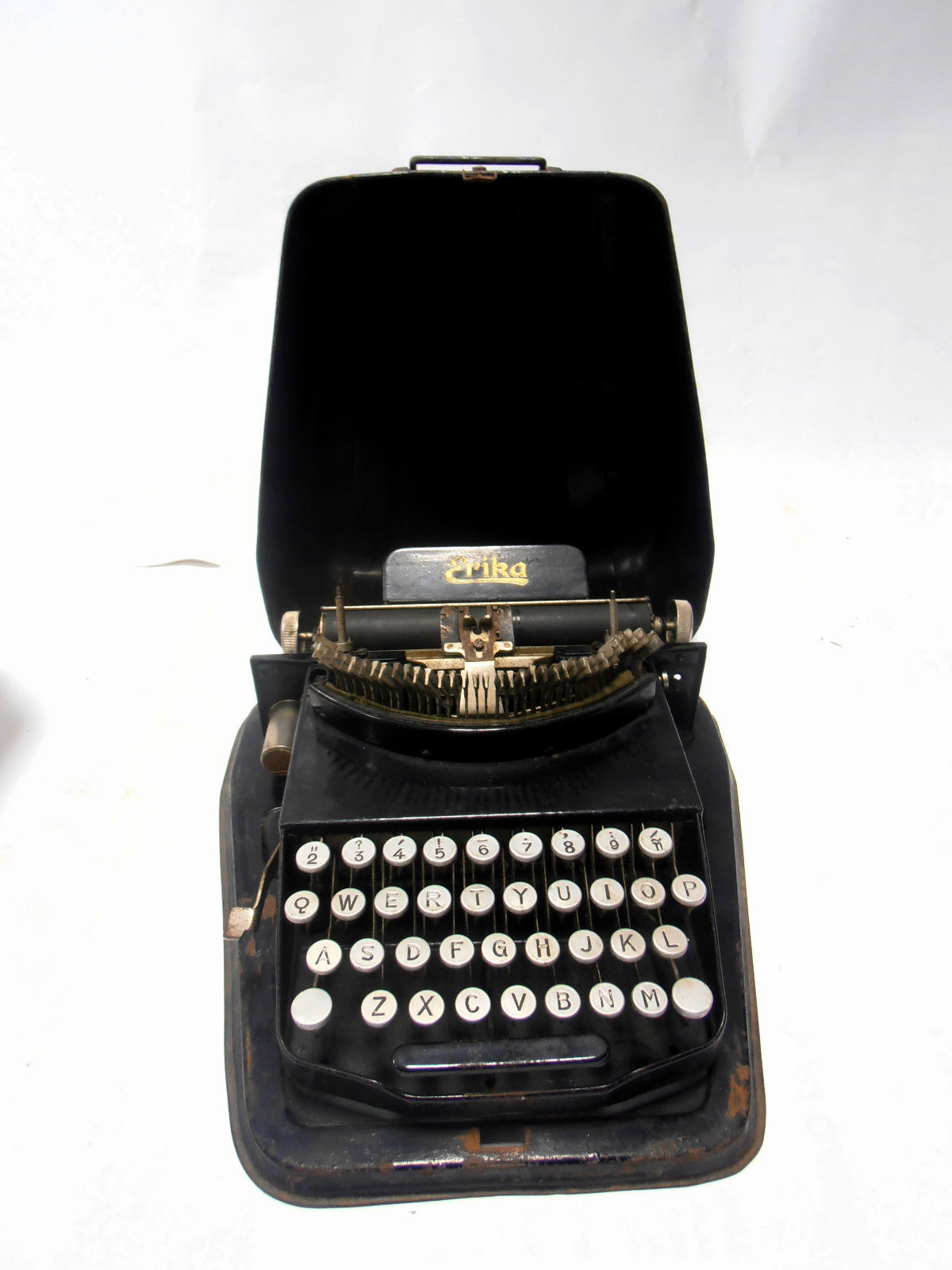 Will Davis offers additional information about Bing’s manufacturer, and posts an image of an “adult” Bing here: ORGA Typewriters 1. Here is the introduction:

The 1924 Typewriter Topics historical compendium notes that Bing-Werke AG of Nurnberg, Germany entered the field of standard typewriter manufacturing in 1922 with a fully competitive four bank machine featuring a removable carriage, single shift and 44 keys known as the ORGA. Today’s research shows a number of patents ascribed to Ludwig Reischl which were assigned to Bing-Werke, applicable to this machine. After a short time, Bing-Werke additionally developed and released a highly stripped version of its typewriter to appeal to those requiring a sturdy machine at a markedly lower price; this machine was the ORGA Privat. 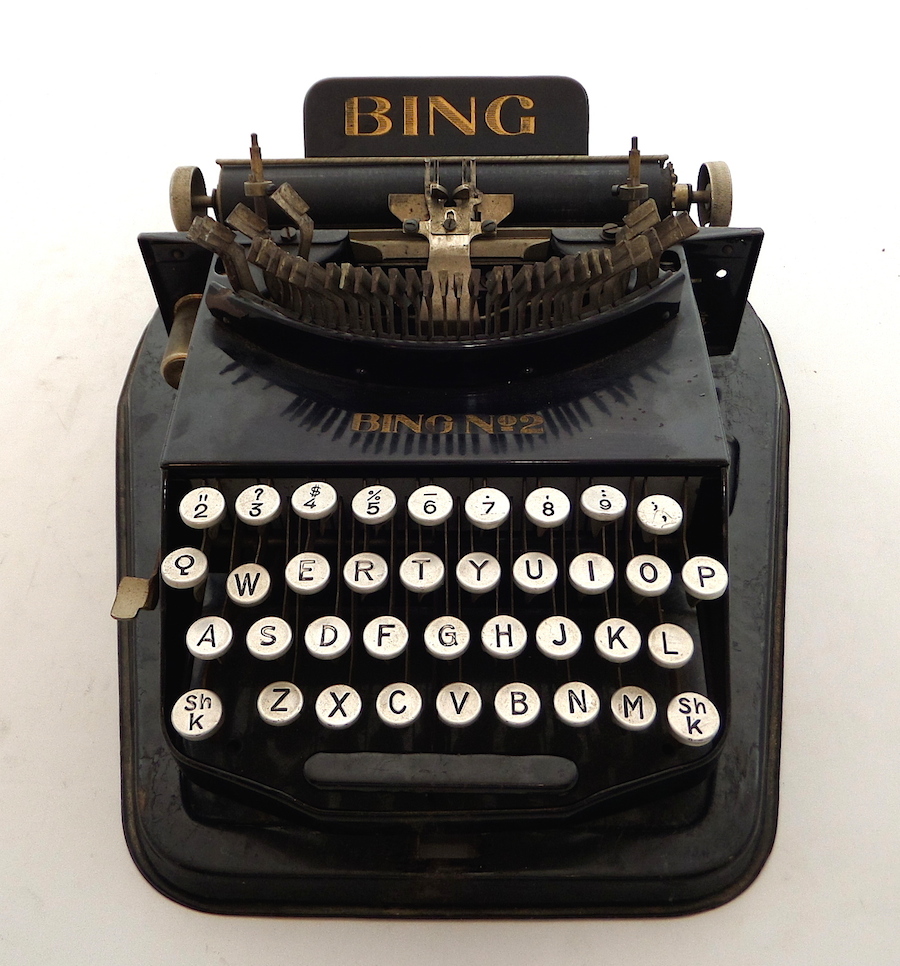 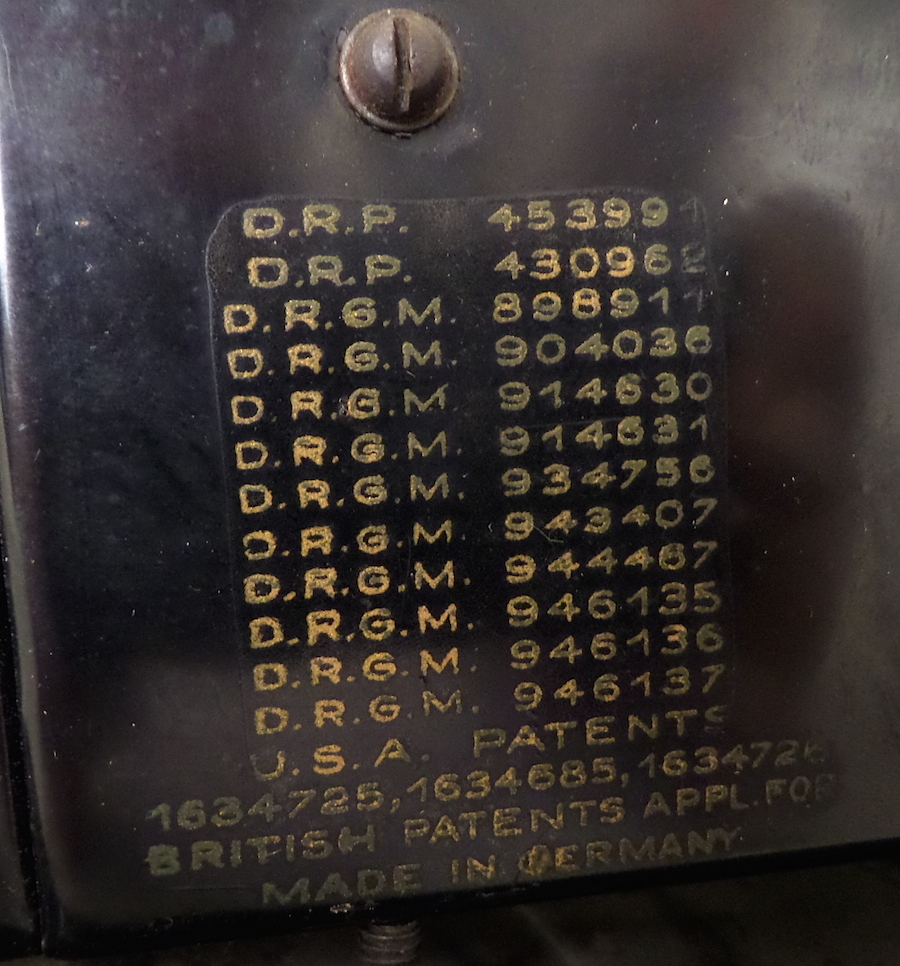 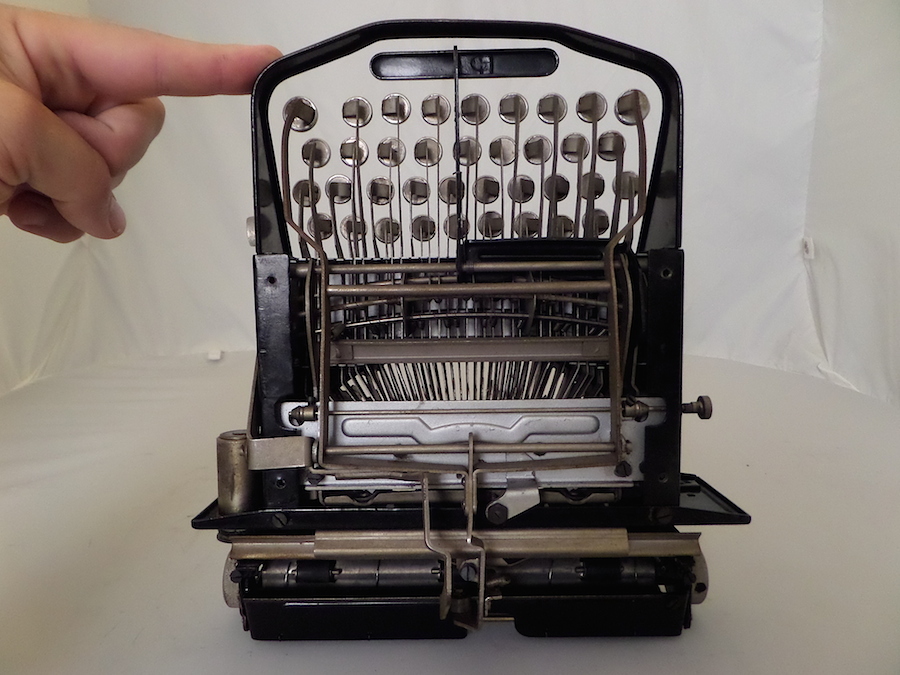 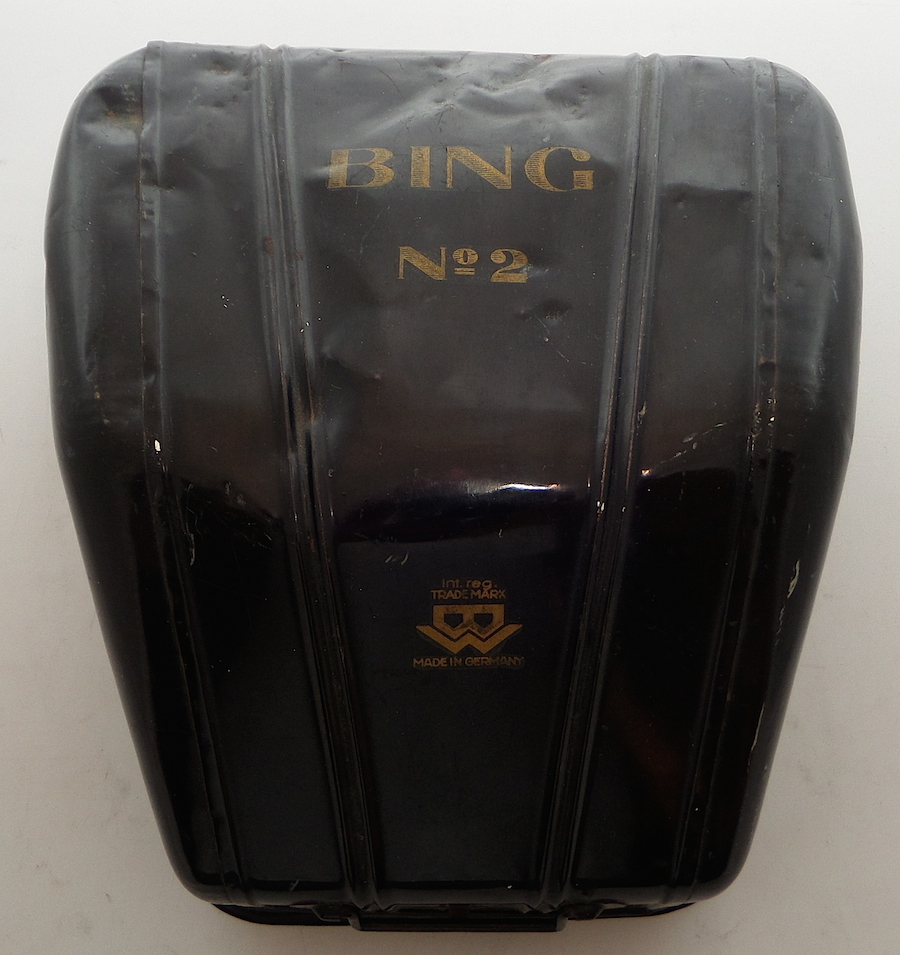 Text only, but this advertisement likely describes the Bing No. 1. From the Reading Times (Reading, Pennsylvania), Dec 21, 1925. 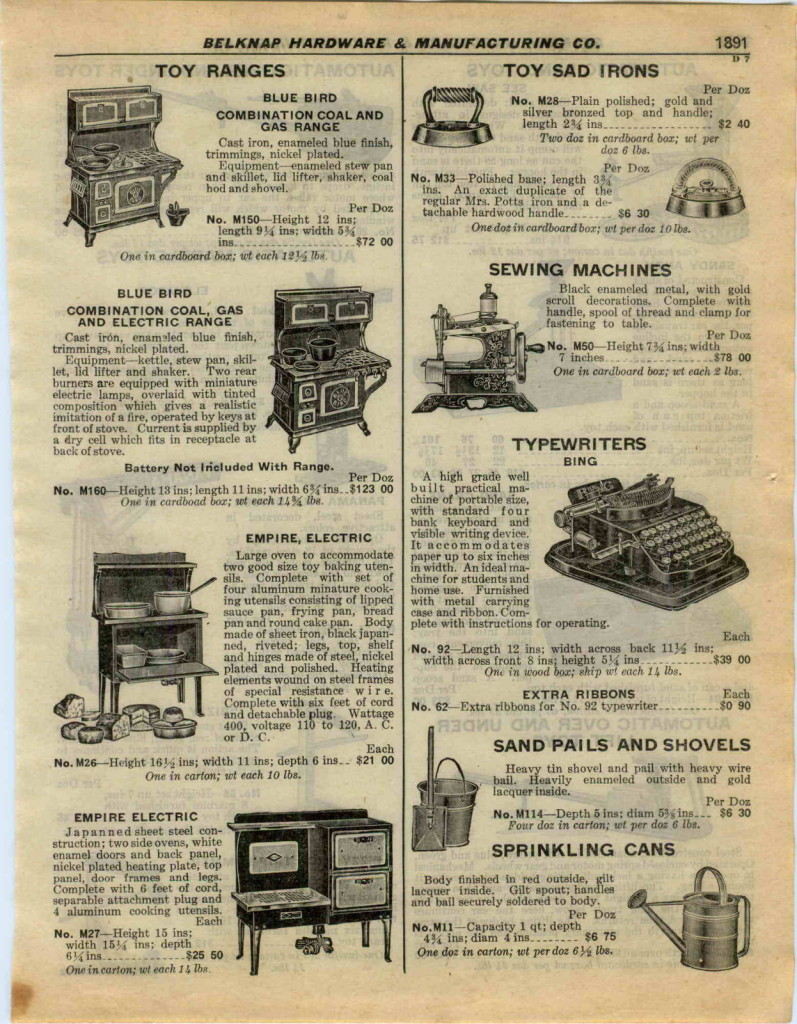 From a 1927 catalog for Belknap Hardware & Manufacturing Co. 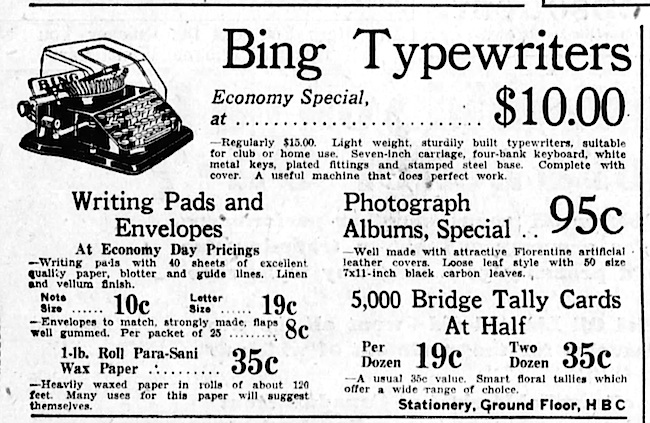 Tyler Menard talks about his Bing No. 2:

GSN Junior Modell 3 toy typewriter
The Marvel Junior Typewriter
Charles Lincoln, I have your Simplex typewriter
"Papa lets me write on his typewriter"