A typewriter of Merritt 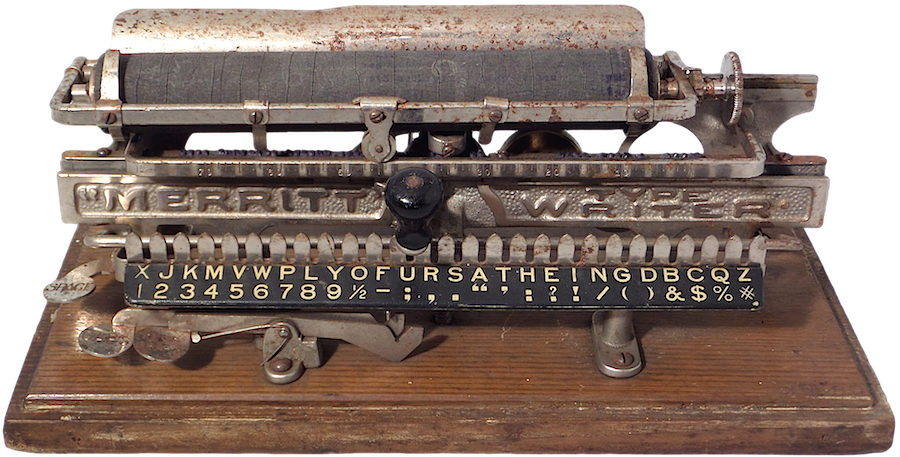 Most sources place production of the Merritt to 1890, but a search of digital archives reveals it was introduced in 1889.1 The Merritt was offered as an economical alternative to the standard, full-sized machines of the period, and the prevalence of extant machines suggests it was a commercial success. Serial numbers reach well into the thousands.

Robert Messenger at oz.Typewriter reports that the Merritt was designed and engineered by brothers Mortimer and Charles Merritt, and that this linear index machine was produced by the Merritt Manufacturing Company of Springfield.2 Messenger offers a detailed account of the men’s lives and patent applications here.

The business end of this machine was a sliding rack which held a complete font of printer’s type. As the handle was moved back and forth, each type came to the printing point. The handle was then depressed, and the type was pushed up through a guide hole to the paper which rode on the platen above. As with other blind machines, you had to raise the carriage to see your work. A set of two rollers inked the typefaces as they moved back and forth in the course of the work.– p. 88

The Merritt did not employ a ribbon, but rather an ink-pad system. The advantage, the company claimed, was that users would not sully their fingers.

The principal selling point was its price, $15 (though later $10). Reads one advertisement, “Does work equal to the One Hundred Dollar machines” — the price of the Remington Standard. With 78 individual type slugs, one certainly could have typed any document, but progress on the Merritt must have been slow and tedious. The manufacturer claimed an operator could type 60 words per minute, but an 1889 article balked at this claim, noting, “The speed-test, of course, being made by the frequent repetition of a short sentence with short words, as in all type-writer tests of this kind.”

Here is the article (the text for the Merritt article oddly runs along the right column; it does not wrap around to the next column) — click on image to enlarge: The Merritt was not a toy index typewriter, but a heavy-duty typing machine, capable of serious labor. Its frame and components were crafted from strong metals and mounted upon an oak base. The Merritt was no Simplex.

The first advertisements for the Merritt appeared in the middle of 1889; advertising ceased just after 1896.3 This suggests a six- or seven-year production run. It remains possible, however, that the Merritt was manufactured for a longer period. That noted, most advertisements were placed between 1889 and 1891.

The highest serial number on an extant machine is 13828, see here. The lowest is 611, see here.4 The placement of the serial number varies: on the earliest machines, it was stamped on the right side of the base (and for unknown reasons the numbers 1234 also); on later machines, it was stamped on the surface of the base, either on the back right or front right.

Versions of the Merritt

Essentially, there were two versions of the Merritt: an early variant sans nameplate, and a later, more common variant with nameplate: 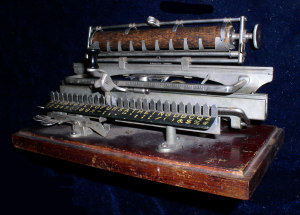 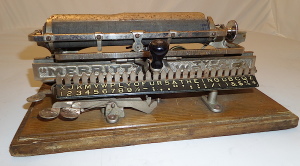 The machine on the top (ser. no. 611) represents the early version of the Merritt — patent information is not printed on the paper table. This machine likely dates to the middle of 1889. The bottom machine represents the later version, and patent information is printed on the paper table. Herman Price displays an early version of the Merritt at the Chestnut Ridge Typewriter Museum, see here. The site mentions that only a few of the early variants survive (or were ever made).

The “later,” however, can be dated to October 1889, when it first appeared in advertisements (see the “Advertisements” section below).

One advertisement notes that the Merritt also was offered with font for Spanish, French and German, and also Scandinavian languages. A leatherette or oak cover was sometimes included for a few dollars more, and sometimes for free. The leatherette cover appears to be a carrying case. The oak, more a cover.

The spelling of typewriter varies, appearing either as one or two words in advertisements, and two words on the face of the machine.

According to reports in the Chinese Recorder and Missionary Journal (1896), missionaries adapted the Merritt as a learning aid for the blind in China. As the type slugs were interchangeable, missionaries crafted a unique Chinese script, which it installed in the machine. It seems students employed the device themselves, though it use is not entirely explained in the journal. Did the type slugs produce a raised script that the blind could read? Or did the students use it to communicate with others who could see?

The following clips are embedded from Google books (click on images to enlarge): Note: This selection suggests the Merritt was still being sold in 1896, but it is difficult to tell how contemporary this account is. The author may be indicating events a year or two past. That said, advertisements dating to 1896 do exist (see “Advertisements” section below).

Later in the journal, a fuller account with examples: Despite having puzzled over these clippings, it is still not clear to me how the Merritt was employed. Please comment if you can sort it out.

My machine is only semi-operable, so I offer a typing sample from an advertisement (the ad can be seen in the “Advertisements” section below): 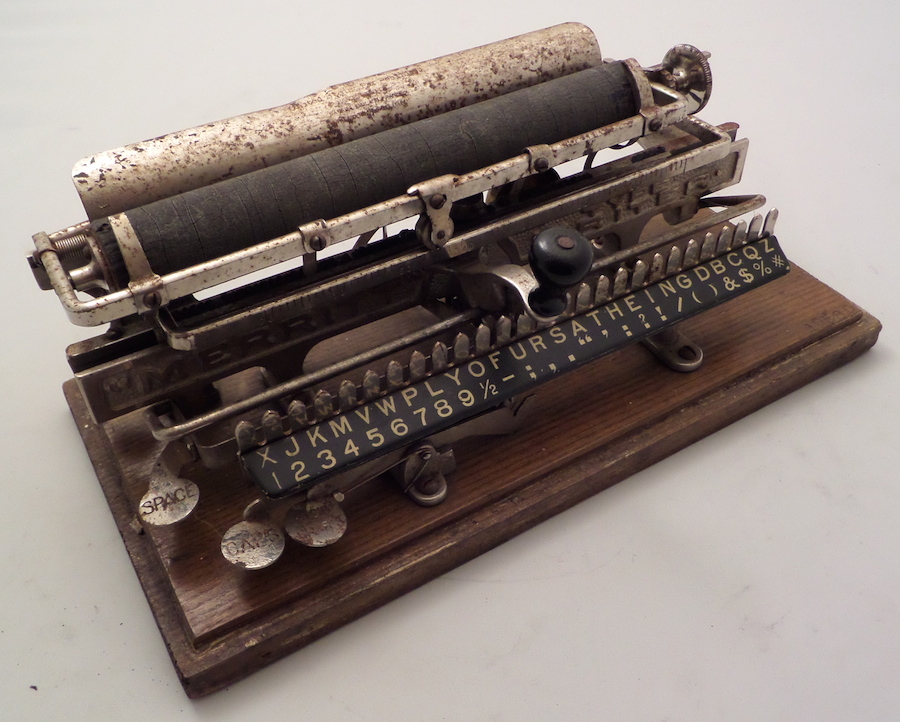 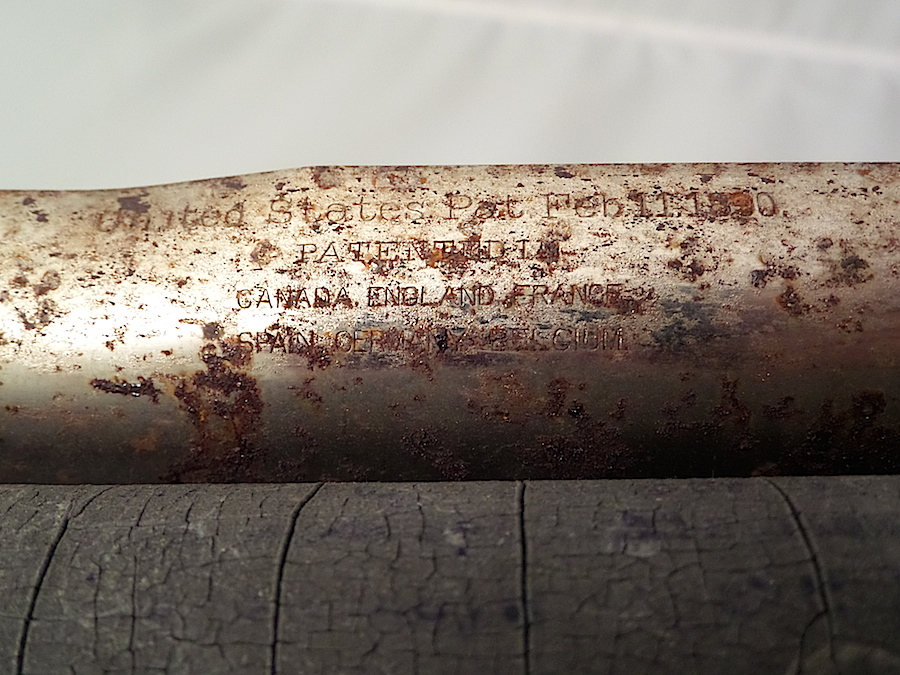 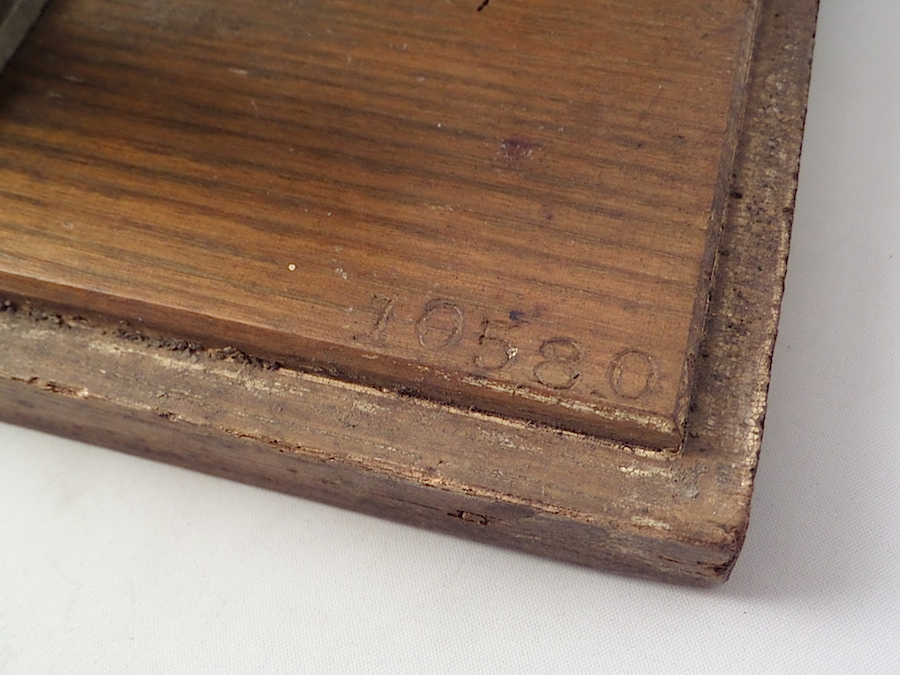 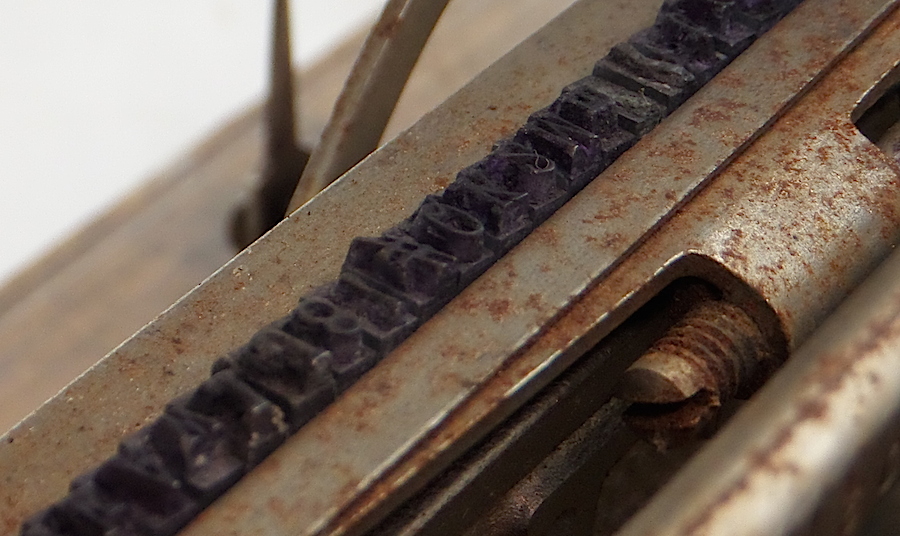 Individual, metal type slugs. Many on this machine have slid out of the housing.

Back end of machine. 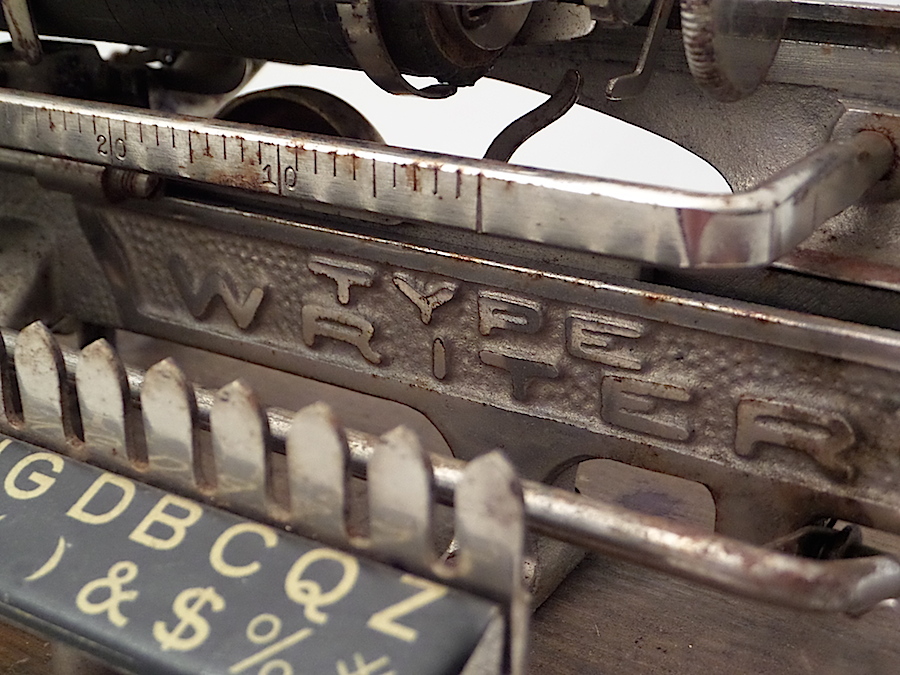 “Type Writer” as two words on name plate. Merritt spelled typewriter variously as one word or two words in advertisements. 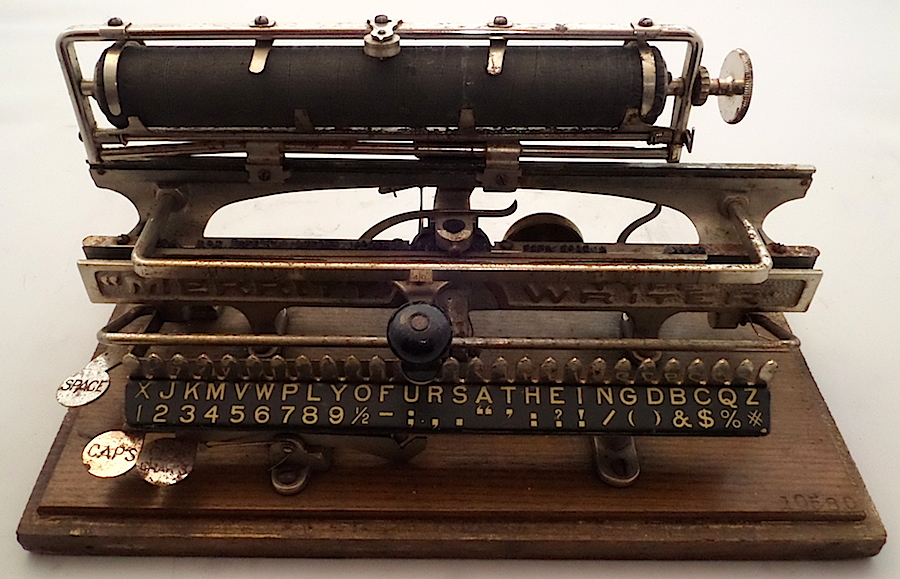 A “blind” typer. The operator had to lift carriage to view work. 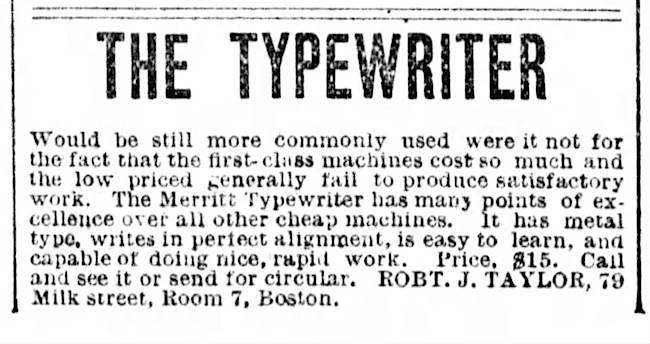 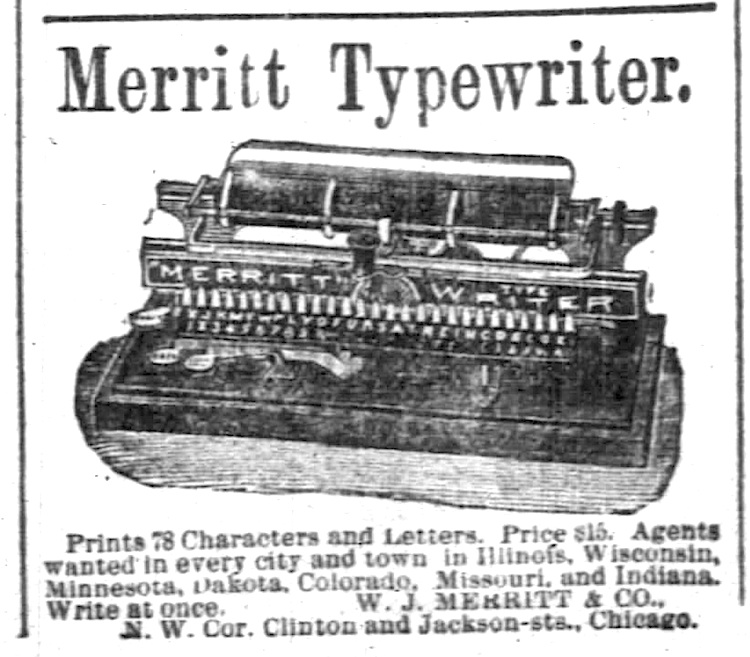 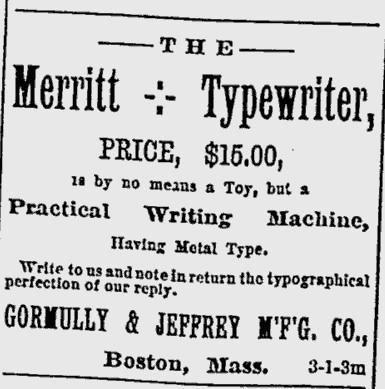 The second page of the ad above.

The last advertisement I could locate for the Merritt Typewriter, from the Boston Post (Boston, Massachusetts) July 13, 1896. Note, this is a classified listing, so “new” could simply mean “new in box,” i.e. unused old stock.

Circa 1902 Simplex Typewriter No. 2
The Dial Typewriter (aka the Peacock)
The Boston Typewriter
Scientific American introduces the Edison Mimeograph Typewriter (1894)