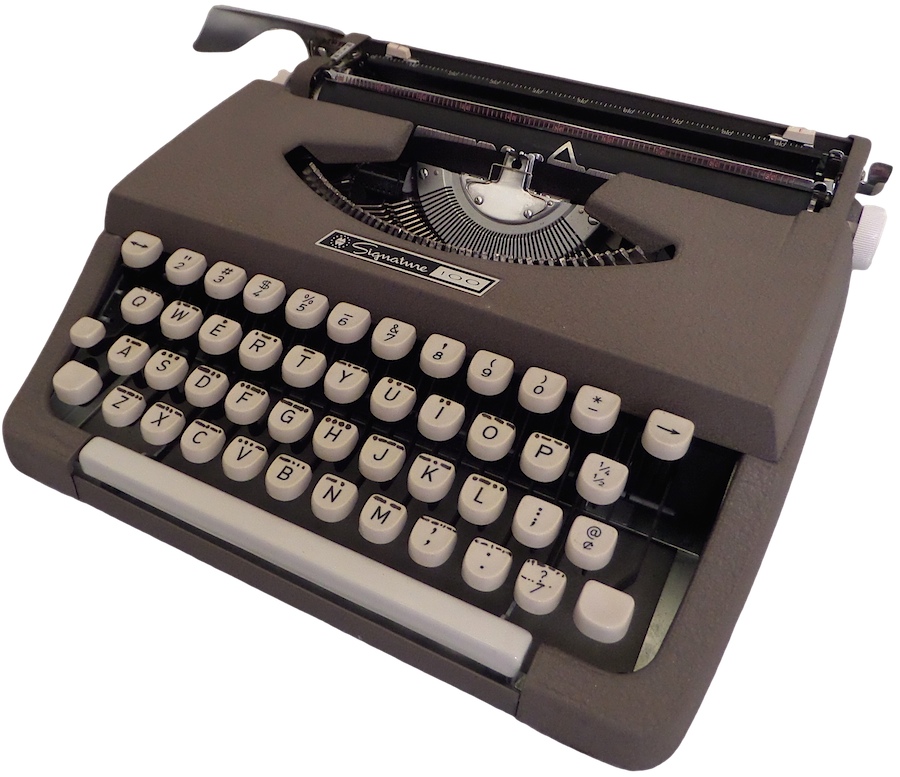 Brother began manufacturing typewriters in 1961,1 and the first machines hit the North American market late that year. My (Brother) Bradford dates to 1961,2 and Ryan Adney lists a 1962 Brother Valiant at the typewriter database.3

Initially, Wards sold the Valiant.4 In August of 1963, the retailer introduced its own line of Brothers under the Signature label. The 100 is a basic model, lacking ribbon selector, tabulator and touch control. It sold for around $36 and was offered in charcoal brown with a matte finish. It included an “attaché” carrying case. The 200 and 300 models offered a fuller set of features.

Montgomery Ward apparently wanted a distinct line of machines, so Signature portables are generally unique, differing in design from other Brothers in a number of ways, typically in the design of the frames.5 That said, the Japanese manufacturer also sold a Brother 100 (sometimes identified as the JP1-1416), like the Signature 100, in the early 1960s. (See Robert Messenger’s post on Brother.)

Note: The Signature 100 did not come with an optional Morse code keyboard. Whoever owned this one originally drew the dots in dashes on it. 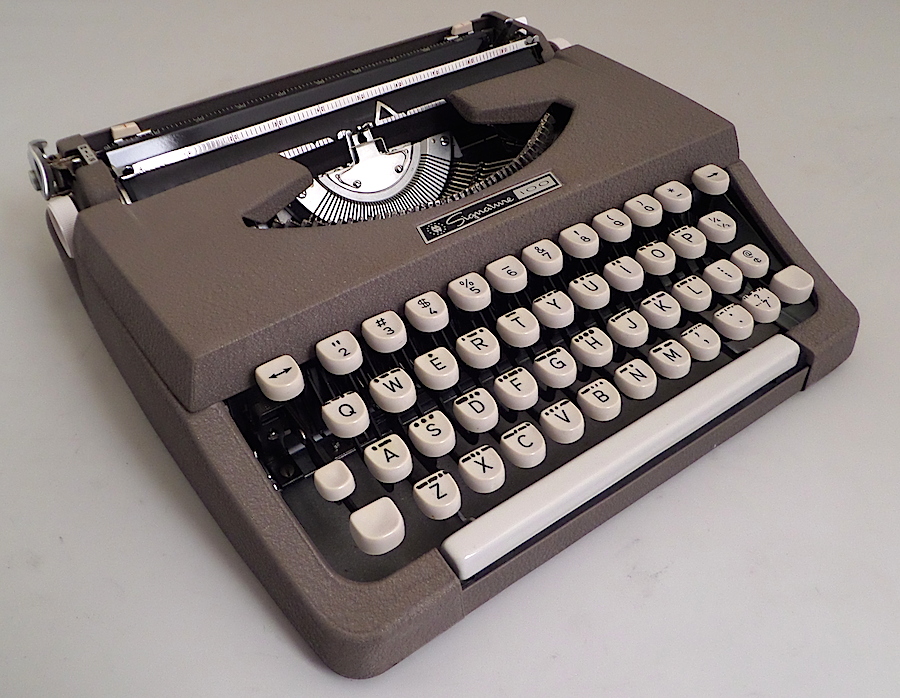 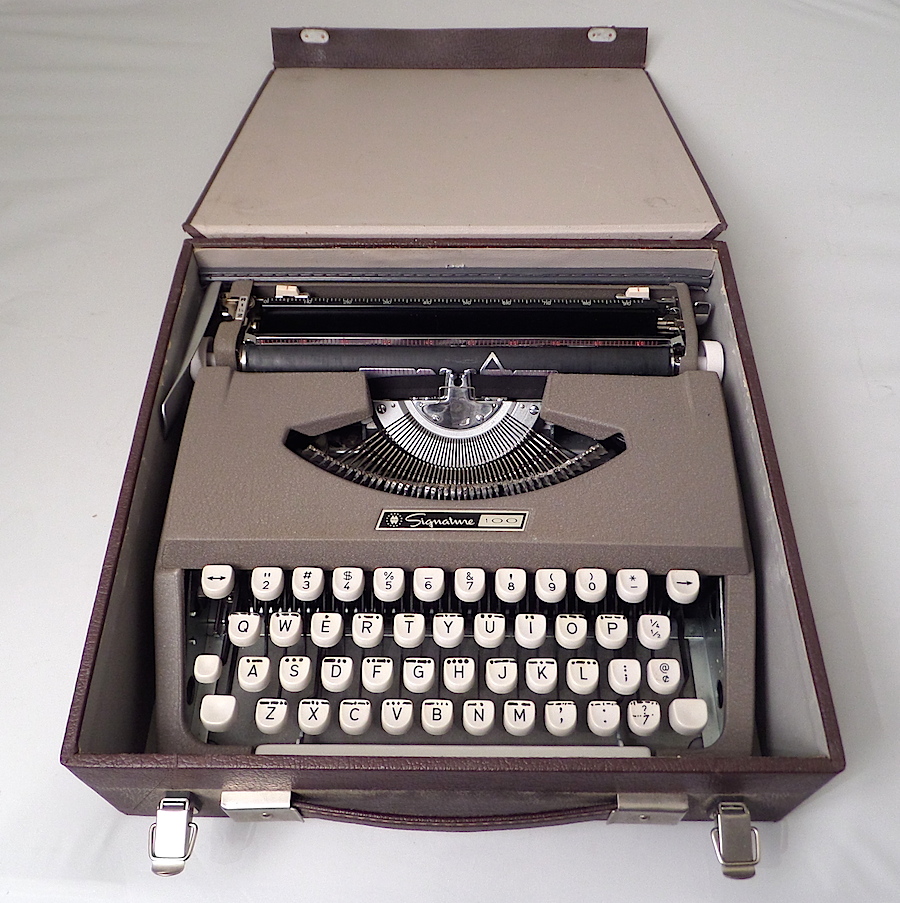 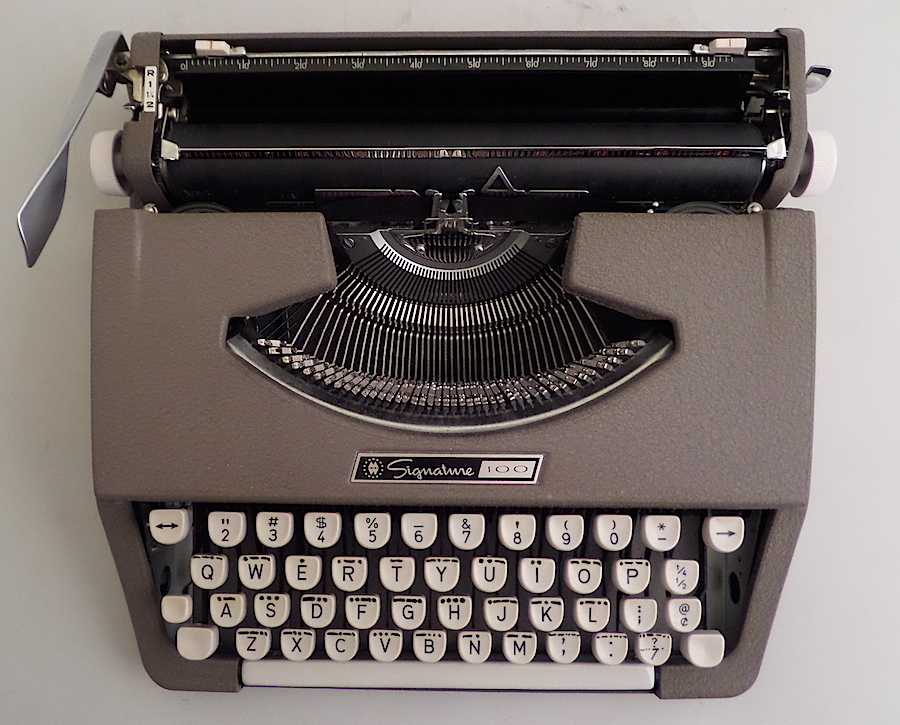 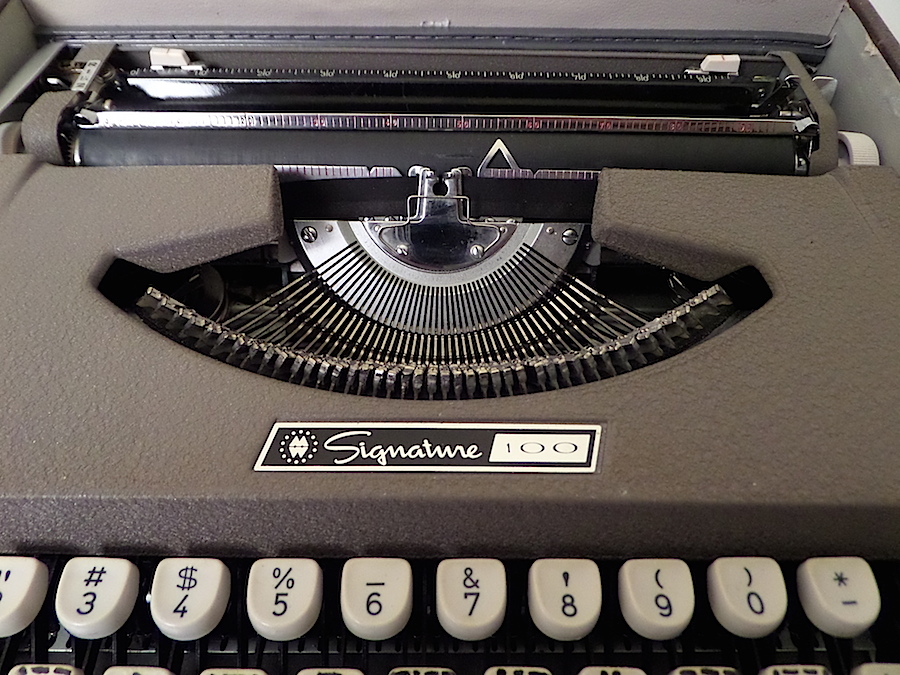 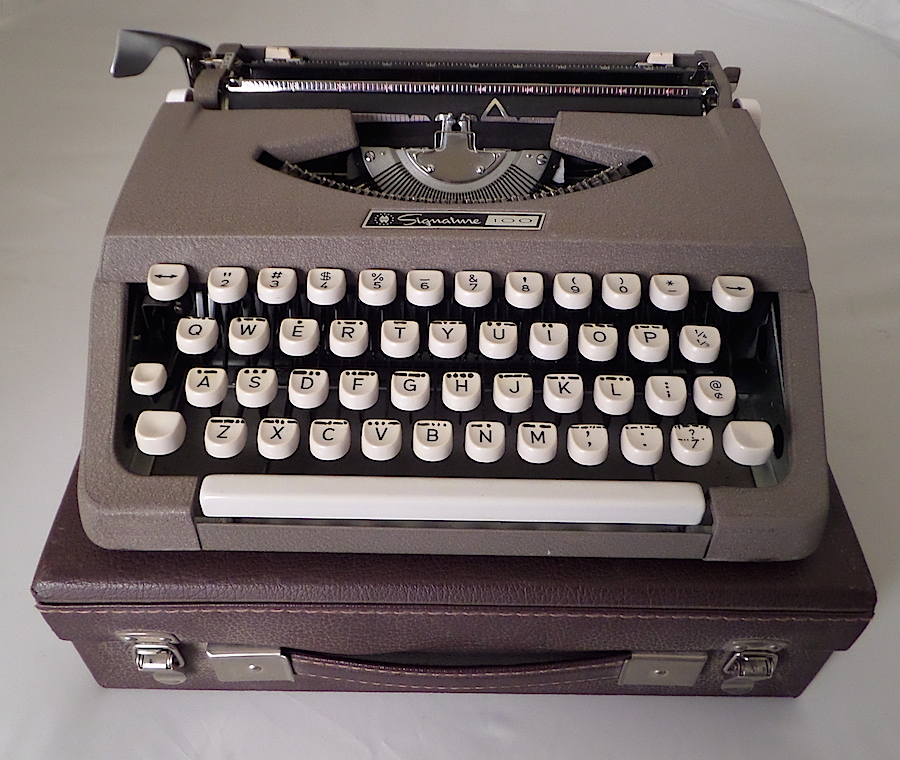 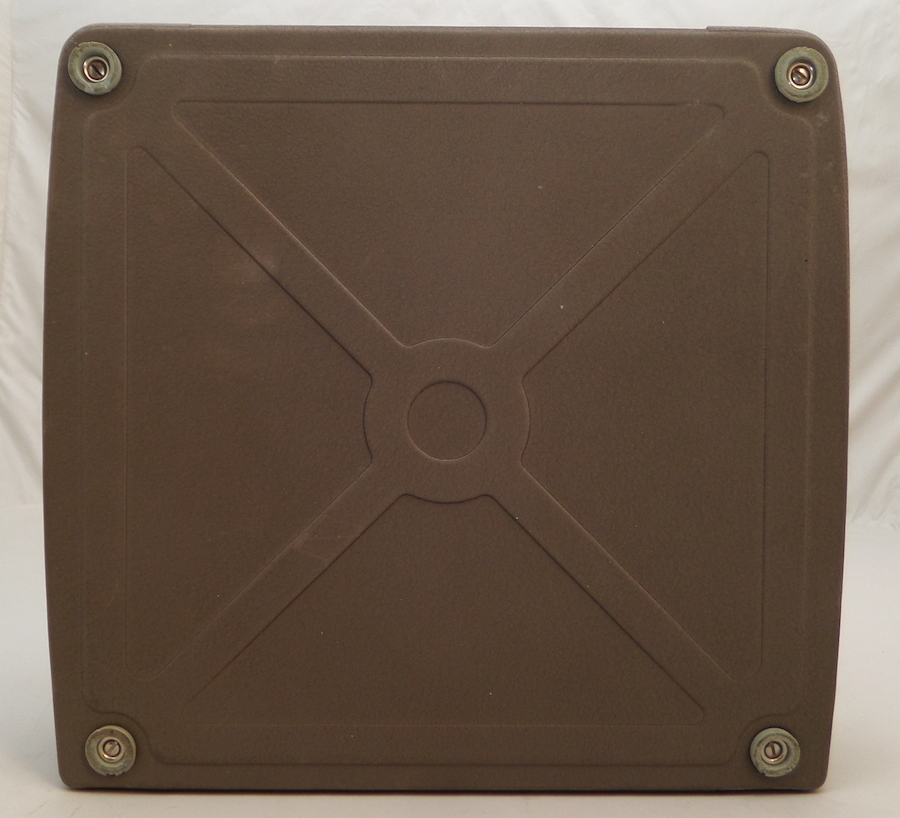 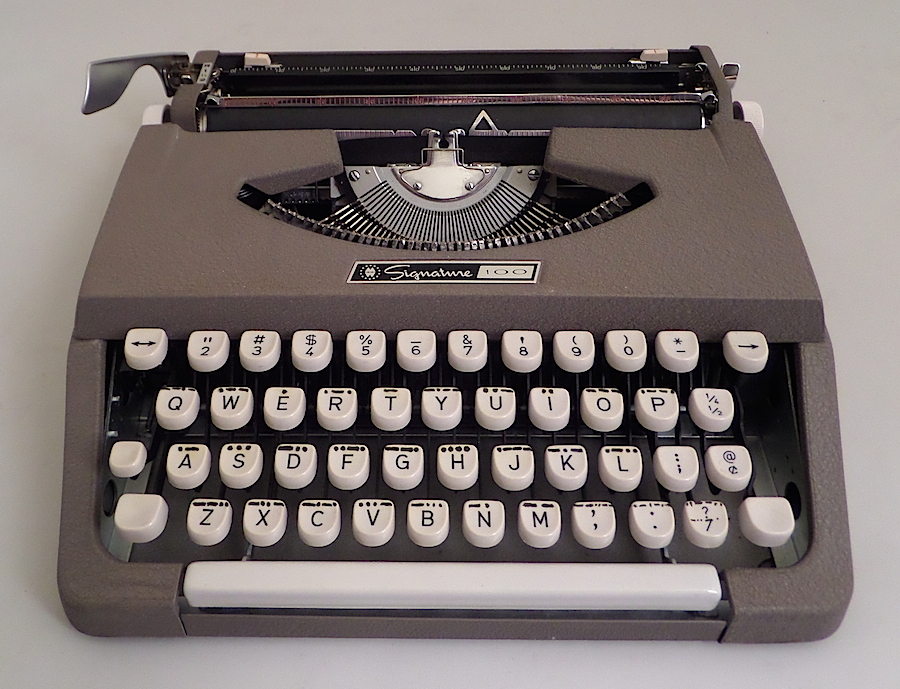 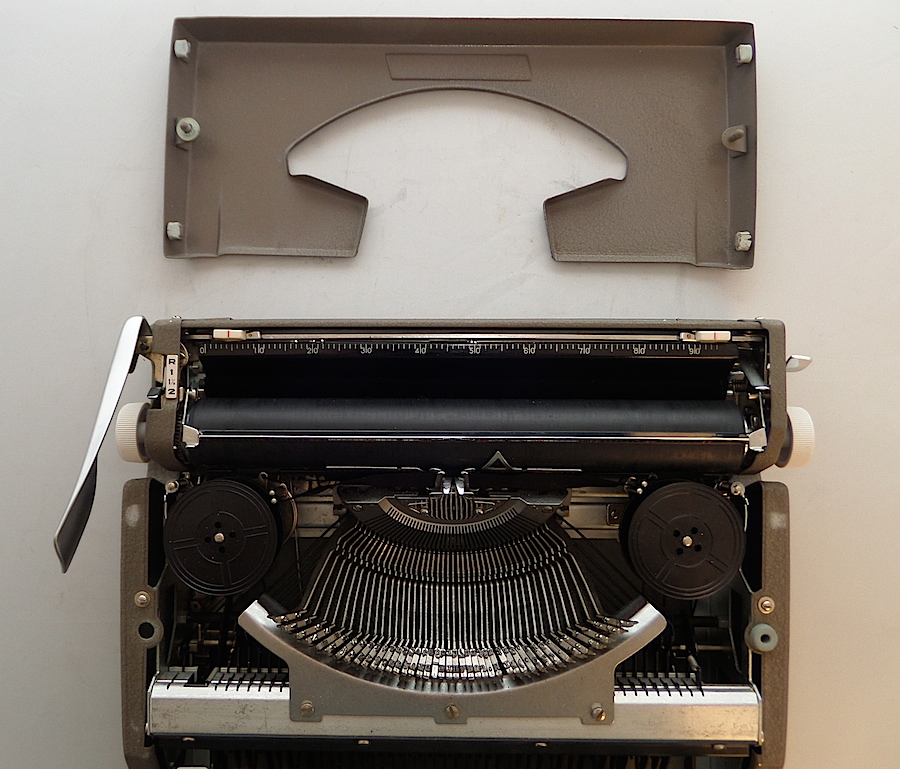 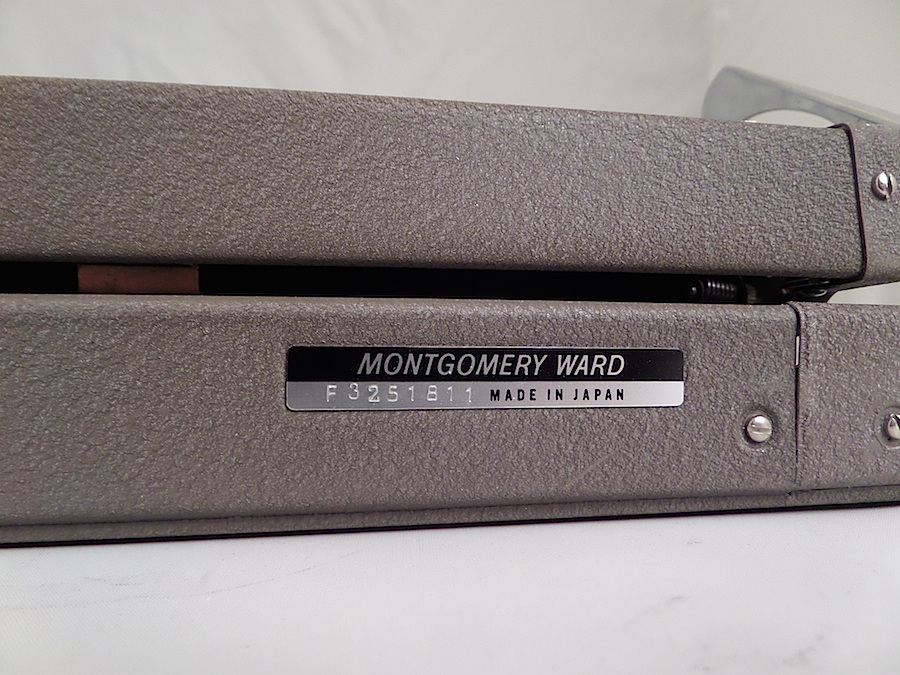 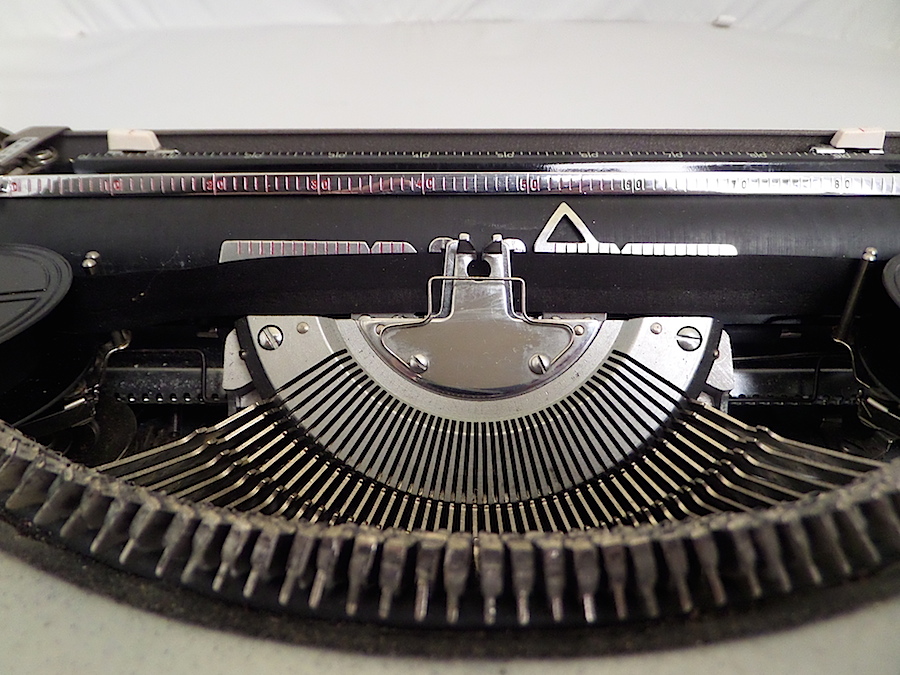 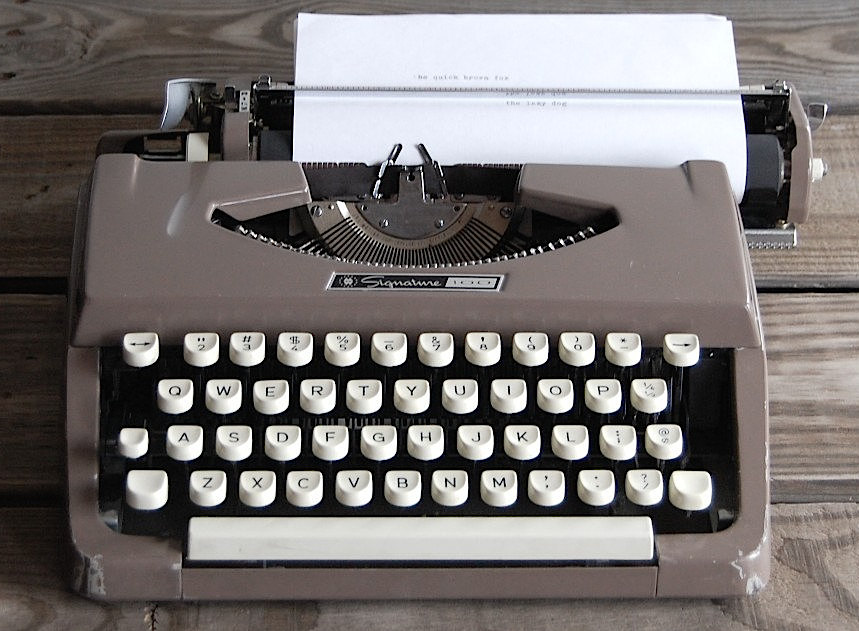 And for the typewriter database: 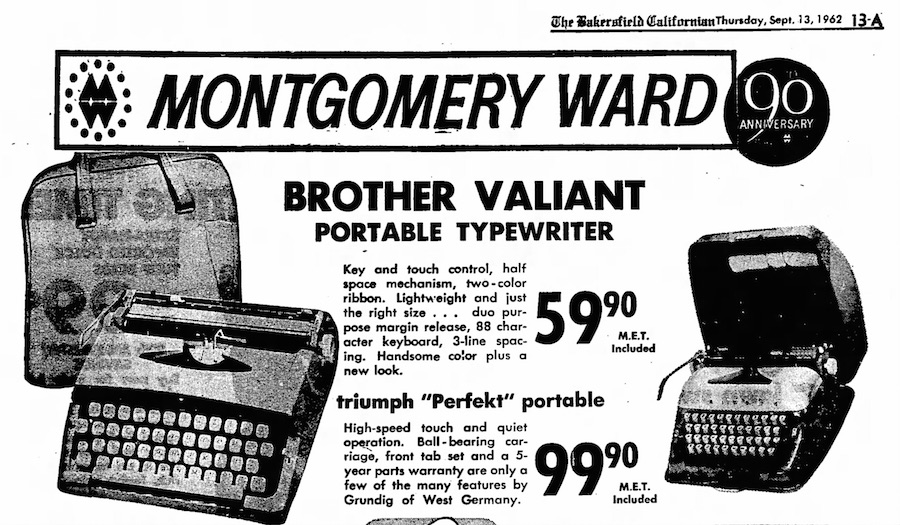 Before launching the Signature line of typewriters, Wards sold the Brother Valiant. From the Bakersfield Californian (Bakersfield, California) Sept. 13, 1962. 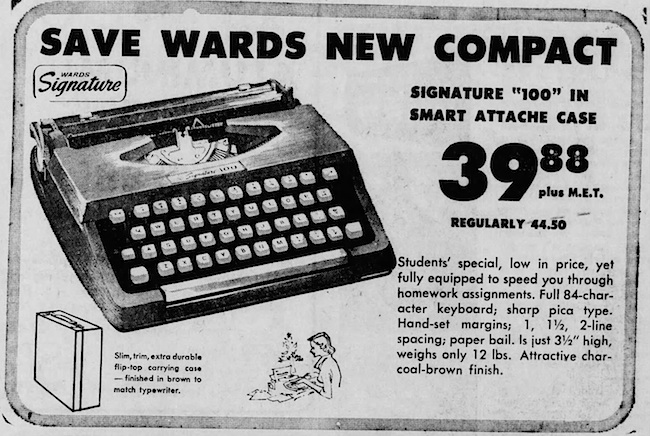 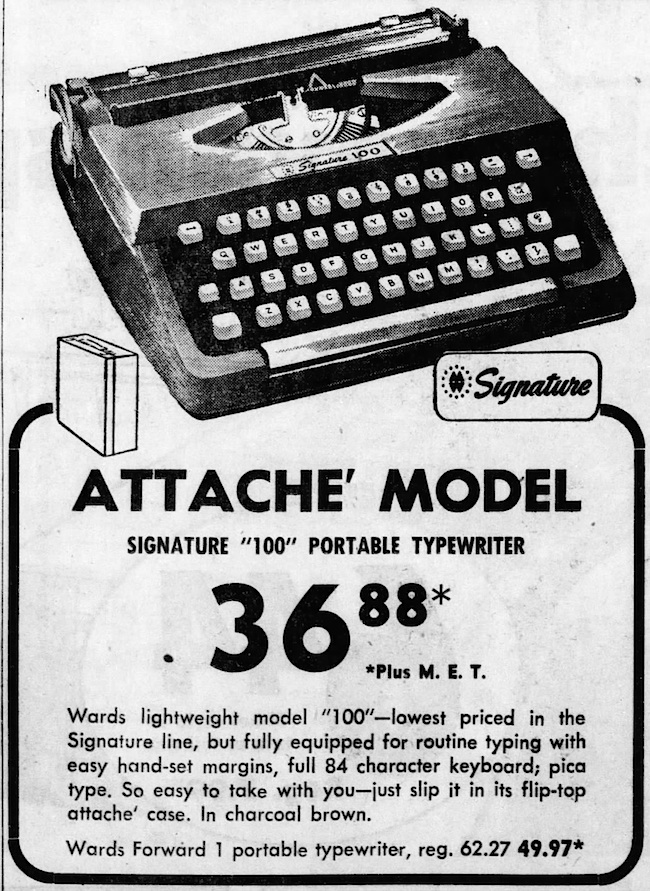 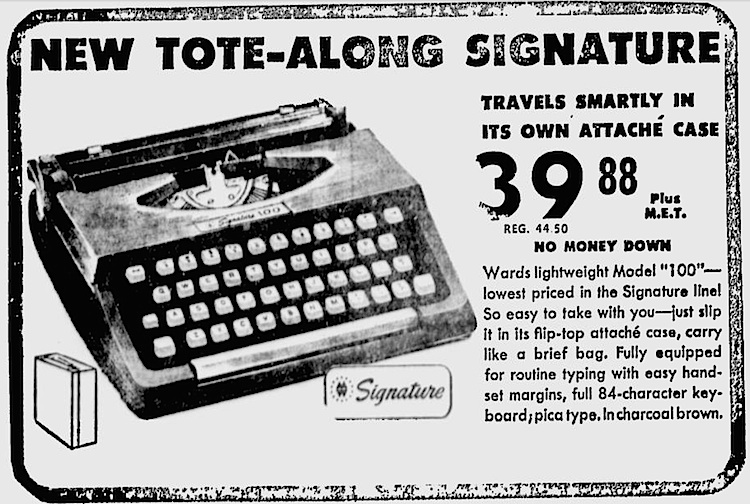 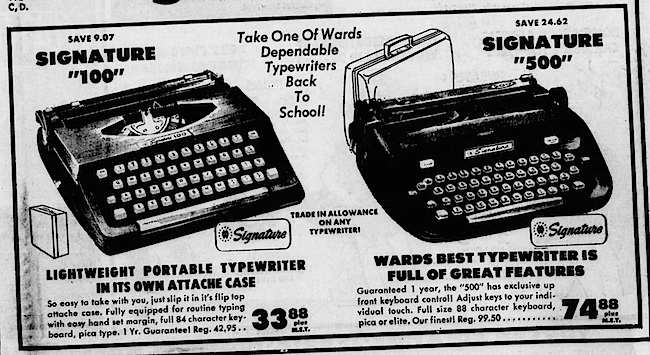 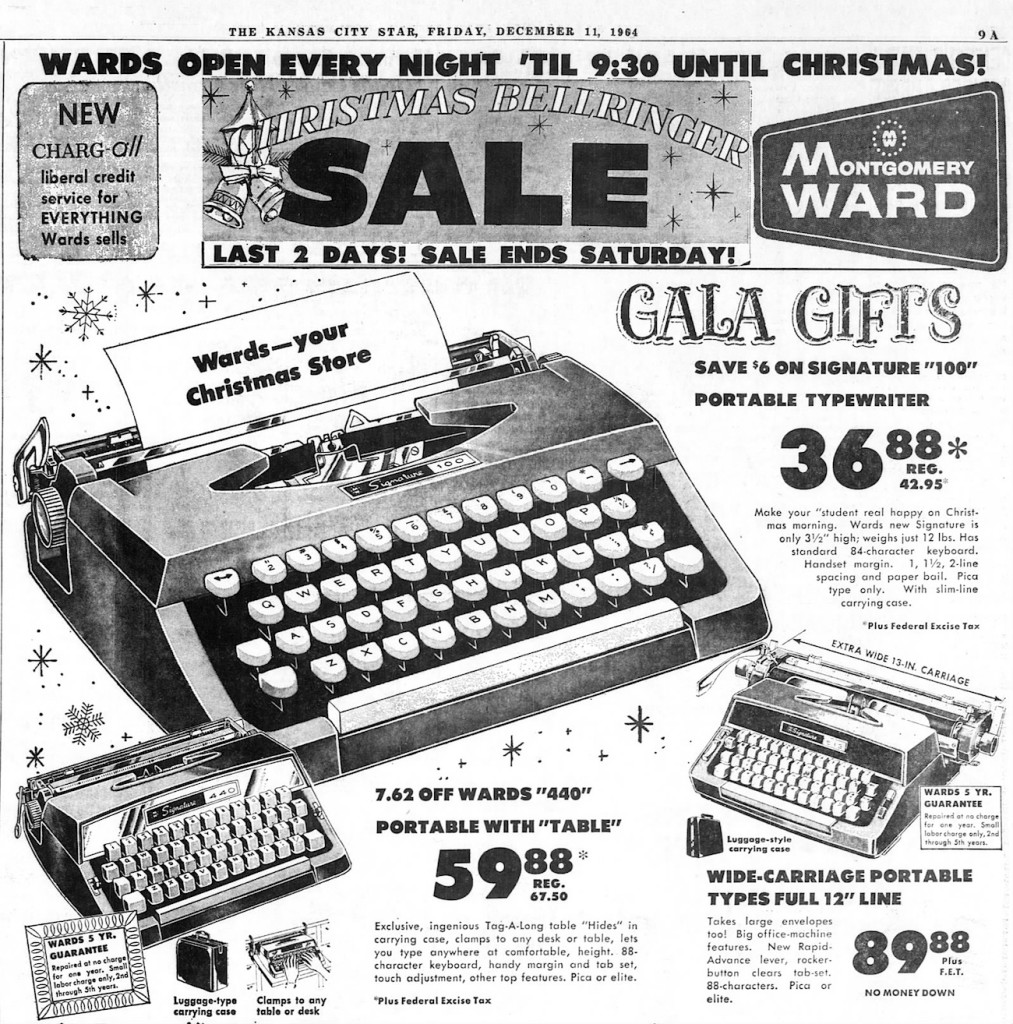 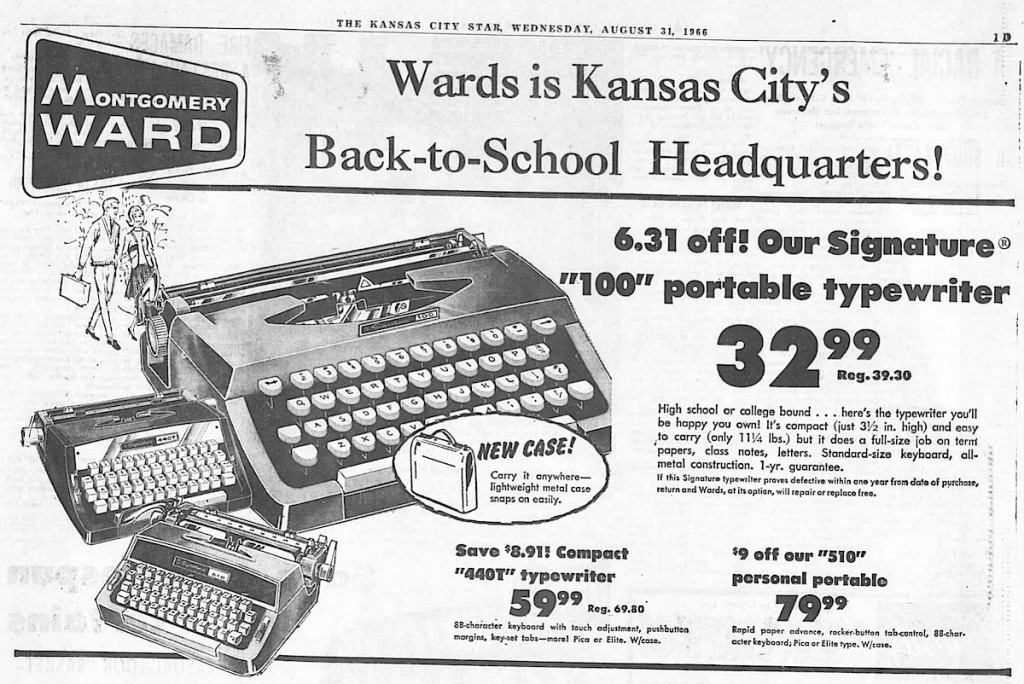 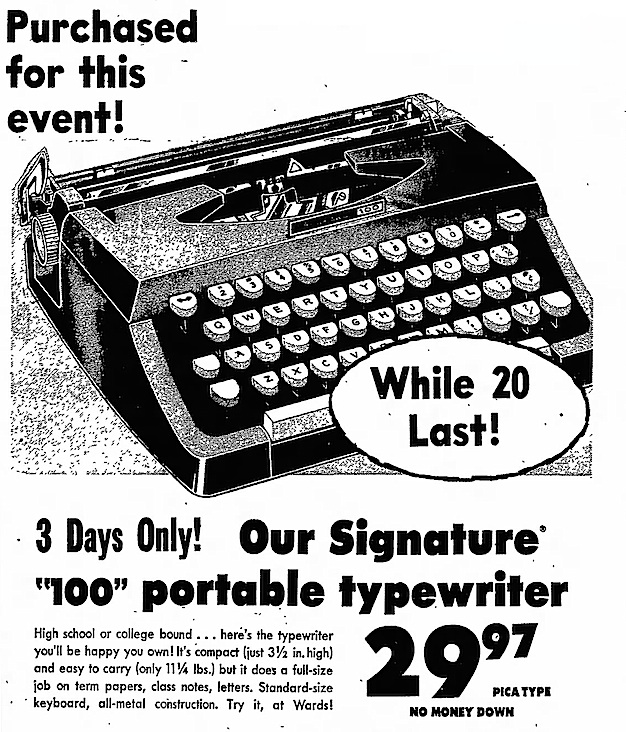 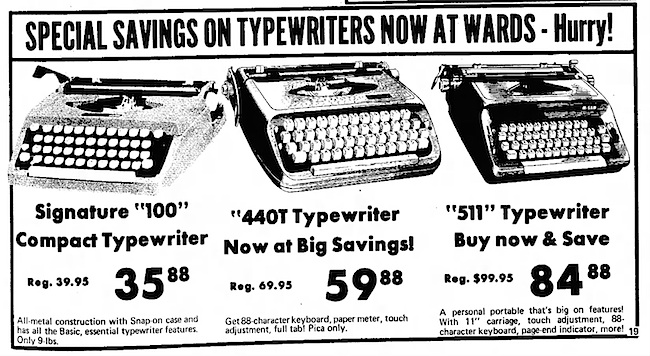 And, curious about machines being rebranded? Read this page at Machines of Loving Grace.

666: "The Beast"
Hermano Coronado
The Brother Typemaster
1987: Uh, no, really, the typewriter is not dead

Previous post: Over the top advertisements for the Remington Portable