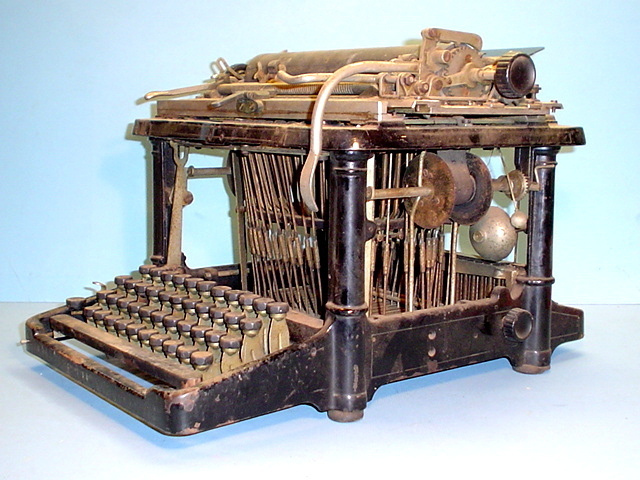 Looks brown in photo, but it is black.

Part of the fun of buying an old typewriter is determining its vintage. Lately, I acquired a Fay-Sholes that does not display a model number. Typically, this is found on the paper table, a piece that is easily removed… and lost. My machine is certainly a Fay Sho — the type-basket shifts, not the carriage. However, though the paper table is present, my typewriter sports an eagle emblem, not the Fay-Sholes name. Fine lettering in the border of the emblem reads, “Made in U.S.A.” and “New York Import & Export” — I surmise the company exported these typewriters under its own name to Asia, where it had business interests. Regardless, my machine is most certainly a Fay-Sholes.

At first, I concluded it is a Fay-Sho No. 7, as several collectors I queried have suggested. Now, I’m inclined to think it is a Fay-Sho No. 6, based on other photos I’ve found of the typewriter. I e-mailed the collectors back with my evidence, and they believe I’m on the right track. Take a look for yourself — 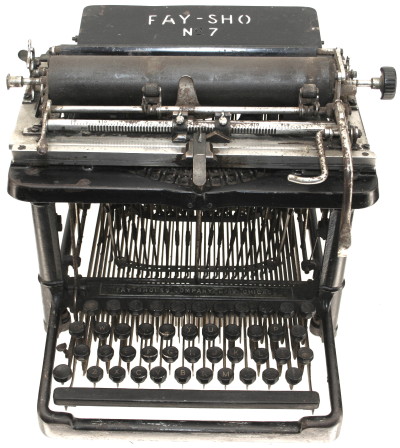 Here is a Fay Sho No. 7, recently sold by Branford House Antiques. Note the model number is clearly displayed on the paper table. 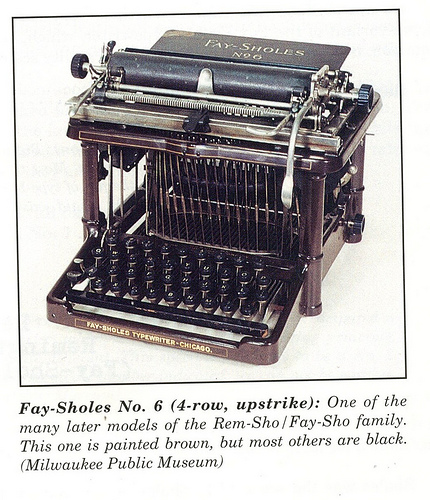 I found this image in a book on antique typewriters. I only have a few pages of the book, so I don’t know the title.

Granted, the differences I note are minor, but that is part of the problem. There aren’t many differences between the two. According to TypewriterDatabase.com, the No. 6 was made for the Anglo-American market (mine was last located in Pennsylvania), and the No. 7, a re-branded No. 6, for the European market. At present, I suppose I should say that my typewriter might be a No. 6 or a No. 7, as I simply do not have enough evidence to decide. The serial number on my unit is low (805 [though there appears to be a stray “7” before the “8”]), but I’ve not found any list of serial numbers for these machines. So the search continues…

Next post: What does it mean to join the typosphere?