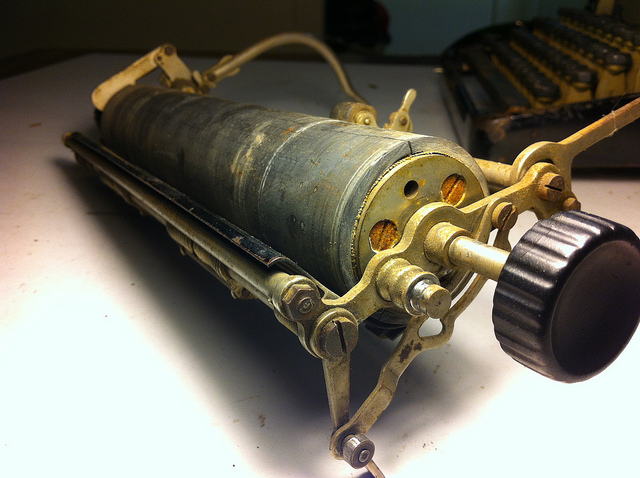 The platen is removable. More photos at my Flickr page.

I’ve begun to restore a Fay-Sho No. 7 that I lately acquired on eBay. To be honest, I’ve never restored a typewriter before (save unsticking a few keys or replacing a some screws), but I’m working slowly and carefully, and do not expect to bring any great harm to the machine. The typewriter, featuring an eagle emblem on the paper table, is complete and even functional. All keys strike, and the carriage would advance if the leather belt was not so deteriorated. Except that the typewriter had been stored in a outbuilding for (decades?), it probably would be in better working order. Or not. I suppose had this been kept elsewhere, poked at, or moved frequently, it might not be in such decent condition. Who knows?

Its condition? Here’s my general assessment:

Thus far, I’ve cleaned the external parts of the typewriter and some of its internal workings. I’ve disassembled the carriage assembly, which is simple enough, and have begun to clean each part. From what I’ve read, the Fay-Sho features a number of improvements over the Remington models, which it closely resembles. I would have to agree. The platen is removable and each part of the typewriter fits intuitively. Some pieces are even labeled (e.g. “front” and “rear”).

As I’ve been working, I’ve discovered a number stamped onto the top of the frame, under the carriage assembly. Two rows of numbers read “22” and “828” — not sure the significance of these numbers. Under the top of the typewriter, I found the serial number: “805” alongside a stray “7” (model number?).

As I progress, I will probably have a new leather belt crafted, though I’m not sure where one end connects. The belt is about 7 inches long (perhaps a section is missing). Also, I’ve begun to get estimates for a new platen and rollers. The platen is 9 1/2 inches (240mm) long. The bottom feed rollers are 1 3/5 inches (40mm) and the top feed rollers are 3/8 inch (10mm) long.

Why am I restoring this old typewriter? First, I haven’t decided how extensive the restoration will be — I may be satisfied with a simple cleaning of the machine. Second, I think it is time for me to undertake a mechanical project. Most of my endeavors have been intellectual; in truth, I rarely work with my hands (and, when I do, not very competently). My landlord, a retired mechanical engineer with International Business Machines, is providing encouragement and advice, and if I proceed slowly enough, and carefully enough, the worst that will happen is that I’ll have a partially restored Fay-Sho No. 7. Not a bad goal.

Yet, there is another reason: Inexplicably, I feel compelled to bring this machine to working order. It seems close enough to operating condition to merit restoration, even by one so inexperienced, and not so damaged as to cause dispair. If I am successful at this project, I will undertake others. There is a Royal Standard No. 5 in my collection needing restoration.

One last note, any encouragement or advice would be appreciated.