Ephemera: The Story of Your Newspaper 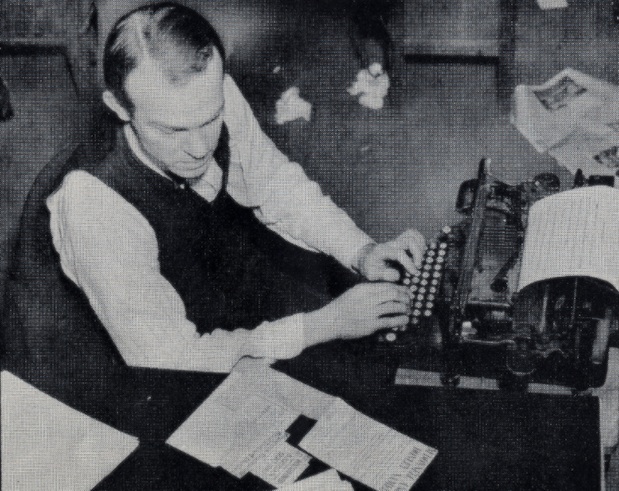 A writer for the Cleveland Press at his typewriter. What machine is that?

The Cleveland Memory Project on the pamphlet The Story of Your Newspaper:

This 31-page brochure, published by the Cleveland Press around 1938, describes how the newspaper was produced and was given as a memento to citizens who visited the newspaper plant. It discusses the functions of the newspaper departments including the news room, city desk, copy desk, library, composing room, engraving room, stereotype room and mailing room. Note: brochure includes photographs.

I chose to reproduce the text on the website because I did not want to alter its vocabulary. How often do we use the words memento and citizen? Today, we might say souvenir and consumer. But that’s fodder for another post. The pamphlet is quite extraordinary, offering a unique view into the operations of a newspaper in the pre-digital age:

It takes a virtual army of people to produce this newspaper. More than 750 people work in, or from, the building at East Ninth and Rockwell as regular employees. This does not include the legion of correspondents scattered all over Ohio and adjoining territory who furnish news on a piece-work basis. Nor does it include the 3200 young carrier salesmen who deliver your Press to your home every day.

Today, newspapers employ far fewer people. In the San Francisco/San Jose Bay Area, for example, one group of reporters writes for multiple “local” newspapers — the logic being, why have a staff for each paper when one suffices? I cut short my own career as reporter, seeing the direction the market was heading (thank goodness for blogging).

While I worked as a reporter, in the late 1980s and early 1990s, I was fortunate to have experienced, at least partially, the older style of newspaper production. Even though we typed on computers, we still edited by hand (red marks on copy), still pasted text on boards, still distributed the paper by carrier. The offices were structured the old way: desks arranged by role — reporters, city editor, copy editor, managing editor, etc. And people read our articles in print.1

I certainly will not disparage the Internet, which opens portals to the world, but there was something organic about the old newspaper office. People worked together; there was society. Today, we’ve become too fragmented, too detached from the real things of life, each person working behind a screen… in isolation.

The pamphlet indeed tells a story. 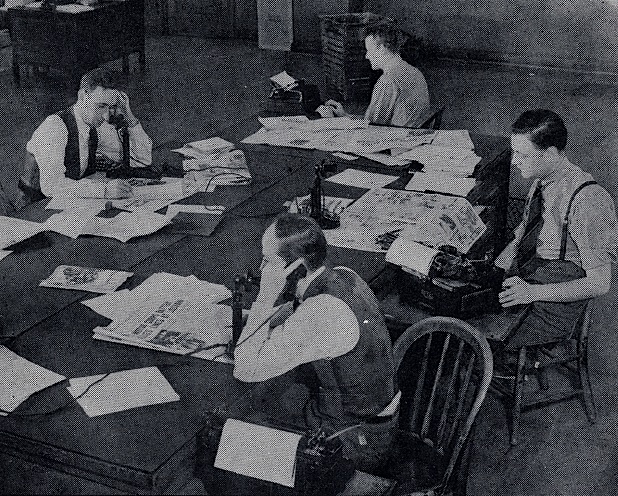 The rewrite men. “Contrary to popular opinion, most reporters do not write their own stories, although all of them are proficient in such writing. Speed is essential in the newspaper business, therefore, it is necessary for several persons to be connected with each ‘hot’ news story.” 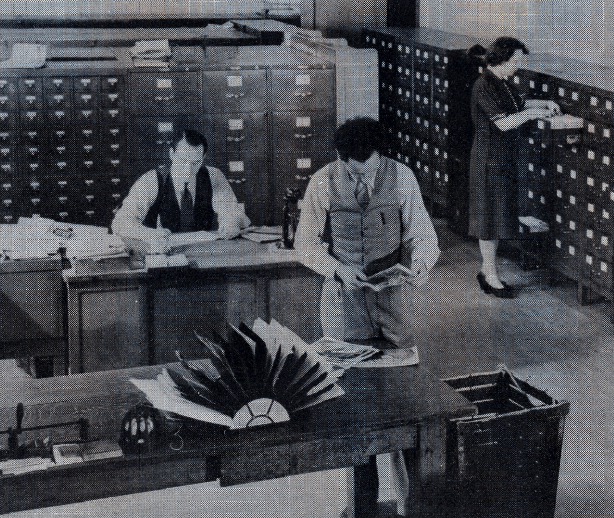 Pre-Google at the Cleveland Press: “It is not altogether improbable that your own picture is in one of these cabinets.”

It will change your style, at least for a while
Fined for typewriting
“Oh, that my words were written with an iron pen”
Typewriting in newspaper offices