Sybil C and her self-published memories 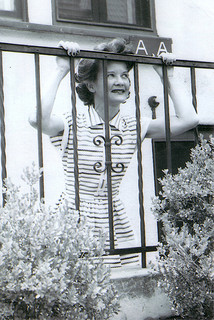 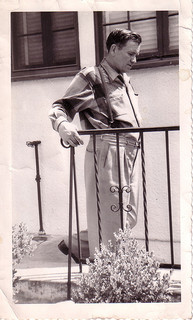 Photo: Sybil C (top) and Tex Adams (bottom) at the Hole in the Ground in Los Angeles.

Sybil Corwin was a known figure in Alcoholics Anonymous, having been the “first woman member” on the West Coast. She and Tex Adams, her brother and my grandfather, started and organized A.A. meetings in Los Angeles in the 1940s, drawing many grateful people to the movement. One popular meeting place was the Hole in the Ground, which is pictured above.

Though 10 years apart in age, Tex and Sybil were very close. Thus, his death in 1952 shook her greatly. He was only in his early 50s.

Sybil kept the memory of Tex alive in her A.A. “talks” and writings, the latter being published by hand or typewriter — such was the nature of “self-publishing” in the mid-20th century. Upon Tex’s death, the founder of A.A., Bill Wilson, sent Sybil a consoling letter. She believed the letter so inspiring she reproduced handwritten and typewritten copies for distribution among family, friends and admirers. Today, there are many people who posses those copies.

Family and the Typewriter

While today we post and save memories via the internet, there was a time when family recollections were preserved and transmitted by typewriter. As I peruse family keepsakes, I note that many are typewritten documents. (In some sense, I suppose the typewriter supplanted the family Bible as the principal means of recording memories.)

Among Sybil’s writings are her memories of life in Texas in the early 1900s. Then, she was a child and Tex was a young adult. Entitled “Puddin’ Trot and Papa, Plus Three,” this collection of type-written stories is an invaluable family keepsake. I offer it below. That such a record exists is a testament to the durability of the typewritten word. I do not know what would have become of these memories had Sybil not been able to type them.

The copy I posses was given to my Uncle Clyde with the following inscription: “This book is given to my nephew, with the hope he may be able to catch a glimpse of his father [Tex], grandparents, uncles, and aunt — as they were in the days of long ago.”

What an extraordinary glimpse!

A history of Sybil C at BarefootWorld.net — Sybil C

Another recollection about the early days of A.A. on the West Coast — Irma Livoni, first woman kicked out of AA, 1941

Here is one of Sybil’s talks: